About a half dozen anti-fur activists gathered in front of Mr. Michaels Leathers, Fur & Jewelry in downtown SLO the day after Thanksgiving to protest the slaughter of animals for their skins. This 17th annual protest drew curious looks and frequently supportive comments from passersby as well as a few hecklers. 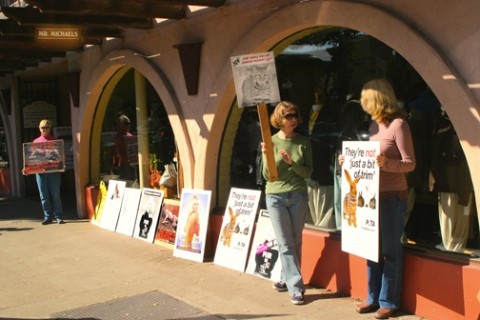 But does the annual protest have any effect?

"It does," Owen insisted. "It keeps people aware, and education is everything. Fur certainly is a glamor item and not utilitarian in any way. There are lots of articles of clothing that are much better at keeping people warm, and we want people to make better choices than buying fur. Annually, 35 million animals are killed globally for their skins."

And as for business owner Mr. Michael (who didn't want his last name used), does he seem affected by the protest?

According to Mr. Michael, not only is he used to it, it's generally good for business.

"I just had two people call who heard about the protest," he said. "One man called and said, 'I heard what's going on. What can I get my wife?' The products we carry are popular because we live in a rural community with lots of ranchers and kids in 4-H. People from Santa Maria to Paso Robles love natural products, leather jackets, and sheepskin coats. One guy just spent $4,200."

According to Mr. Michael, the items he carries are "secondary products," meaning the animals aren't killed solely for their skins.

"Everything gets used," he said. "These protesters outside, yesterday they ate turkey. All the clothes they're wearing use animal products in their manufacture."

The protesters countered Mr. Michael's "secondary products" argument with the assertion that "every fur item is the end result of animal suffering."

Despite their polarized views, Mr. Michael and the protesters seemed to get along just fine, though Mr. Michael said he's seen anti-fur activists not associated with Animal Emancipation, Inc. enter his store and damage goods.

"We've had people come in and draw on things with magic markers, destroy items," he said. "That's to be expected."

Members of Animal Emancipation, Inc. were clearly more interested in peacefully informing the public the day after Thanksgiving.

"I'd say about four-fifths of the people walking by are supportive. Many are disgusted by the visuals," said Owen, pointing to an extremely graphic photo of a skinned animal. "A handful are offended that we're out doing this."