There's a smattering of furry culture on the Central Coast, but it's not exactly a jungle out there

Ever since the term “furry” was born sometime during the ’80s, media outlets have made a sport of poaching it for their own uses. Consult the likes of MTV, Vanity Fair, or Wired and you’ll get a description of a kinky subculture in which socially awkward, computer-interested humans who, for whatever reason, missed the sci-fi/anime bus, join forces to mate in animal costumes. Furry is practically a four-letter word.

But those in touch with the furry fandom, a group devoted to anthropomorphic animal characters, know it as a subculture that continuously yields scores of quality literature, games, films, and artwork. Beyond a devotion to all creatures great and small, members of the furry community are hard to define. There are people who dress as lions, write stories about humanoid tigers, or draw walking, talking bears.

They also see “furry” as a relatively new name for a concept dating back far past the ’80s.

“Animal-people are a staple of mythology and entertainment,” says Cal Poly grad and furry enthusiast Gregory Rice. “What’s Bugs Bunny? What was Mickey Mouse? What about the anthropomorphized animals of Kipling’s Jungle Book? Think about Horus and Isis and Sekhmet and Set. Think about Quetzalcoatl. Pan. The Yeti. Brothers Grimm, anyone? How about werewolves?” 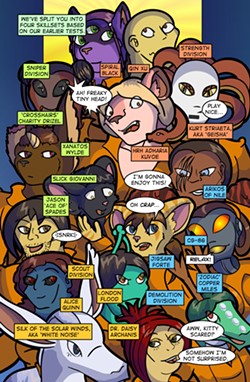 Unsurprisingly, Rice’s own introduction to the furry fandom came from the Internet.

“I ran into a guy in my freshman year of high school who wore a tail and ears,” he said. “I was fascinated. I followed him into the [Internet chat] channels he frequented. That’s where furry came alive—role play, furmeets, social networking, the works!”

Furry conventions with names like Further Confusion (SF Bay Area) and Califur (Irvine) do enjoy a wide turnout. But aside from these yearly spurts, much of the fandom’s interaction is online.

Fur.com/tapestries provides adult playgrounds in which animal characters can interact and experiment. Tapestries is strictly patrolled by “wizards” who monitor the goings-on and ensure that the website’s policies are being adhered to. No human characters are allowed (exceptions are made for elves). The site also prohibits harassment (discrimination or put-downs based on species are considered especially bad).

The newly spawned anthroverse.com is a social networking site not unlike MySpace or Facebook, except it’s furry-only. Anthroverse profiles describe a user’s fursona—a description of one’s animal likeness. The Webmaster of Anthroverse, a white lion named Alex, resides in Los Osos.

Another furry turned up in Santa Maria. However, he was unavailable for comment, being at that time only 16 (soon to be 17) and still living with his parents. The furry fandom, his mother said, has been a rather hairy issue in her son’s life. “I think it’s a cult,” she stated flat-out. Her son was lured into the fandom through an interest in anthro art, but now the furries keep harassing him online and just won’t leave him alone, she said.

Rice gave the fandom another shot as a freshman in college. His WOW leader—a furry—brought him to a convention.

“I had a fantastic time. What a party!” he said. Describing the draw of fursuiting, or dressing up in an animal suit, he sums up the experience as “truly psychedelic.” Rice himself doesn’t “do the fursuit thing,” but having tried it out, he has plenty of insight into its appeal.

“Well, you take on a persona with no responsibilities, no rules, and no hang-ups,” he explains. “You can leave your neurosis at the door … when people react to you as an animal, you can’t help but fall into the role.”

Cal Poly graduate, oceanographer, and full-fledged furry Sedona Wolf (seeking to protect both his identity and his fursona, this is a fur pseudonym) helped shine light into the tangled, obscure jungle that is the furry fandom.

Wolf is a veteran furry convention (or furry con) attendee. The day of his interview with New Times, he was preparing to take off for Chicago’s Midwest Fur Fest the following day.

Of furry cons, he says, “In a more innocent time in my life, they were about meeting people.” A typical con will feature fursuit performances, dancing, comedy routines, and furry art, he said. According to Wolf, it’s a bit like high school; there’s the popular crowd, the geeks, the weirdos, and everyone in between. He likens the experience to a big reunion.

Addressing suspicions of a pervy side to furry cons, Wolf said, “Anyone who tells you furry is not about sex is lying to you.” Fursuit sex does occur at furry conventions, he said. “But it’s kept pretty low-key,” he added, often communicated through underground channels, not included on the official schedule of events between a comedy sketch and lunchtime or anything like that.

Besides, Wolf points out, the same frisky shenanigans happen at sci-fi and anime conventions all the time. There’s just something controversial about fur.

For his part, Wolf asserted, “I don’t partake in any of that crap.” The problem, he said, is that those furries who aren’t into fursuit sex fall into the same category as those who are—as far as the uninitiated public is concerned.

So a terrier and a husky walk into a convention

Perhaps to prove this point, Wolf offered to call New Times from the Midwest Fur Fest and pass the phone around. The candid interviews that followed supported Wolf’s claims about furry cons’ relative noncontroversiality.

The first furry New Times spoke with was Wolf’s girlfriend Jill, from Ohio. An actor, she said that fursuiting as a terrier and a monkey is just an extension of performance. A slim minority of convention goers, known as therians, don’t actually identify as humans, she said. But many are like Jill, solid individuals who partake in furry while fully cognizant of the fandom’s quirks and inconsistencies.

The phone worked its way over to a wolf-husky hybrid named Furball. A Chicago native, Furball works for a marketing and PR firm, where he is known as “Frank.” Though his choice of fursona reflects his work ethic and pack-oriented nature, he doesn’t take it too seriously. “It’s not like I reach down into my inner husky” when stressed at work, he said.

However, the canine alter ego does help him break away from the seriousness of his nine-to-five job. “The guy you see running around acting silly at cons is really who I am,” he said. “In everyday situations,” he adds, “you have to act appropriately.” Furball/Frank enjoys dressing as an animal but knows when to say when. As he puts it: “Banks? Airports? Aunt Sally’s funeral? Not exactly appropriate.”

Furball had been interviewed earlier that weekend for a Chicago newspaper. He could tell that the reporter had an agenda, he said, but he stayed positive, hoping this time the resulting piece would present a fair view of the fandom, instead of zeroing in on the most shocking aspects.

“What little information is available is often from fans, as opposed to a corporate presence. Fans, almost by definition, have a hard time providing the same sort of sanitized, carefully-worded ‘professional’ image that a company would.” 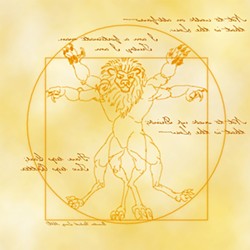 Keslensky’s work, as she explains, is a statement about the Autism Spectrum. “All of these creatures not only look different, but also perceive the world differently as well,” she said. Certain characters hear better than others; some see better. “All this leads to a world where what you can sense is just as important as what others can’t. The world around them has learned to adjust and accommodate for these differences primarily because they can see that they exist—if a creature has big ears, you know not to shout at them, for instance.”

“It used to be that to have a career as a furry artist you had to be an animator, a children’s book illustrator, or a comic artist,” said Keslensky. “Now we have folks who can produce original, on-demand artwork and can make good amounts of money off of that artwork alone. Being a furry artist is now much more profitable, and it’s thanks to the Internet.”

Most furry artists and writers agree that the public views the fandom unfavorably. Quentin Long, artist and editor of the furry webzine Anthro, points to the Vanity Fair article “Pleasures of the Fur” and the CSI episode “Fur and Loathing.” Both characterize furries as weird sexual deviants. Media coverage of the fandom, says Long, “overwhelmingly tends to avoid the relatively boring ‘people who dress up in silly costumes to goof around’ storyline.” Instead, the cameras gravitate toward those aspects that make it look like “an attention-grabbing, psychotic freak show,” he said, “something a lot closer to, ‘Eww, skunkfuckers! Film at 11!’”

In a culture in which animal motifs are meant for children only, the crossbreeding of adult themes with cute, cuddly animals produces some wonky offspring. But as Washington-based writer and veterinarian Michael Bergey points out, animal stories weren’t always for the kids.

Bergey, author of the animal-themed fantasy novels New Coyote and Coyote Season, says the roots of many animal stories aren’t nearly as clean as their modern-day counterparts. He cites the tales of Reynard the Fox, an anthropomorphic trickster who emerged in many medieval European animal stories. “These stories were anatomically correct,” said Bergey, “they included every aspect of life, including sex.” These bawdy folktales weren’t written for children, but were enjoyed by all ages. However, they eventually went out of fashion, he said. The Beatrix Potter-style, Peter Rabbit narrative that reappeared much later was part of a long tradition of animal tales that were cleaned up for youngsters.

Bergey’s novels have more in common with Reynard the Fox than with Potter’s Flopsy Bunnies. In New Coyote, the creatures of legend are at odds with modern humans. The power of these creatures is rooted in human belief, but people aren’t interested in magic anymore. They believe in science now. Even our hero Coyote, the wiliest of all, is boggled by the culture of contemporary humans. So he devises a plan. He has himself reborn without memories, and then lives among modern people in order to grasp their way of thinking. Coyote’s struggles, however, are very human. He faces prejudice and survives floods and death threats. He even takes on the CIA.

The local furry population may be sparse, but it stays connected. Sites like Long’s anthrozine.com bring them the latest art, comics, poetry, and even book reviews by furry historian Fred Patten. Networking sites like the ever-expanding anthroverse.com allow furries to stay in touch. On Anthroverse, furries can share original music, art, and fiction, and receive constructive feedback from others. Serious furry artists can also consult deviantart.com’s “Anthro” section.

“When I busted up my spleen in a car accident,” said Rice, who now lives in the Bay Area, “I didn’t get flowers like all the other poor invalids; I got a parade of Disney-esque mascots streaming into the hospital, jamming my morphine pump button and cuddling with me until I healed. Now, tell me that don’t got universal appeal to the inner child in all of us.” ∆

—Rachel Keslensky’s Web comic Last Resort can be seen on lastres0rt.com (That’s a zero, not the letter O).

—For more on Michael Bergey, go to michaelbergey.com or myspace.com/michaelbergey.  Bergey’s New Coyote and Coyote Season are available through Amazon.com. (For signed copies, select “wynoocheewestbooks” from the list of affiliated sellers.)

—Also worth a mention is Wikifur (furry.wikia.com), the furry encyclopedia.