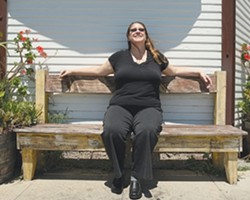 On a warm Thursday afternoon, Julia Dyer sipped soda from a Styrofoam cup while she sat on a bench outside the High Street Market & Deli in SLO. It was just her lunch break, not one of the mandatory “furlough” days off. Actually, Dyer is saving her forced days off for a trip to visit her brother in England.

She quickly calculated how much furlough time she had “banked.” It was about 36 hours.

“So I guess I have been using them, too,” she said and laughed slightly, like she’d been caught having too much fun.

Dyer, an environmental scientist for the Central Coast Regional Water Quality Control Board, has worked for the state for eight years.

Furloughs are a mixed bag. Some employees, like Dyer, appreciate their time off and are saving it for a big blowout vacation. In February, the state gave all its employees—at least, those not working under an elected official—mandatory furlough days on the first and third Friday of the month. The rules changed a little in March when the same employees got to choose their days off, but still had to take two unpaid days per month.

That time off equates to about a 10 percent pay cut, which means that while Dyer essentially has two three-day weekends per month, she has less money to do anything exciting then.

“I found myself [doing] all my doctors appointments and errands and what not,” she said.

Sometimes, Dyer will go visit stay-at-home moms and other people who are home during the day. Or maybe she’ll spend a day lounging at the beach. In other words, she finds things to do that generally don’t cost money.

She said she’s feeling the pinch, but knows she’s better off than many. “See, I don’t have kids or a mortgage,” she said, “so I think that’s really why I’m not sweating it.”

Then there are such state workers as Lynne Larsen. Larsen is 52 and has been employed by California for the past two years. She has a full-time government job, but earlier this year moved to live with her mom in a trailer in Arroyo Grande. The front yard, like those of most of the neighbors, is all gravel. Inside, Larsen was sitting on a large brown couch with an “Amazing Spiderman” blanket draped over the back.

She said there’s not much fun to be had on furlough days when there’s no money to spend.

“What am I gonna do?” she asked, answering herself: “Not a whole hell of a lot.”

Larsen is diabetic and because of the pay cuts, she’s foregoing doctor visits and saving her money for monthly medication. She’s toying with the idea of going on food stamps but still worries about looking for different work: “I would be afraid to leave the state because where would I go and get another job?”

There are probably more cuts on the horizon. Gov. Arnold Schwarzenegger’s budget proposal includes a 5 percent salary reduction—that’s with no additional days off, just less money. Even for a go-with-the-flow person like Dyer, it’s getting to be overkill.

“I think people are close [to snapping],” she said. “I’m pretty easy-going but hearing about this extra 5 percent is even starting to get under my skin.”

Democrats rejected the proposed 5 percent cut during a committee hearing. But the proposal isn’t entirely off the table, explained Jim Zamora of the Service Employees International Union Local 1000.

“We don’t think the 5 percent is dead until they approve a budget that does not include it,” Zamora said.

The Local 1000 represents about 95,000 employees, and few are enjoying their furlough days, he added. On the one hand, it’s a few days off every month. On the other hand, that’s about a month of no pay each year, which leaves the same workers with no money to have any fun, he said.

“It sounds on its surface that with two days off this is a good thing,” Zamora said. “But it’s a pay cut, plain and simple.”

People like Larsen are undoubtedly facing hard times. Her tone gives off an obvious fear that things might get worse, and a slight embarrassment that maybe she’ll never move out of her mom’s trailer. For the most part, she blames the lawmakers, who have so far not made the same sacrifices.

The state budget isn’t getting better, especially with a $24 billion patch job that is expected to severely undercut many social and welfare programs.

On the flip side, there’s Dyer. She’s not hurting terribly, but she’s not swimming in money either. For now, she’s mostly just leaning back and making the best of things.

“I just try to do my job and enjoy my time off,” she said, “and then not stress about the rest.”