Dusty Colyer-Worth likes the fact that he gets to "wear a lot of fun hats" in the San Luis Obispo community.

During the day, Colyer-Worth is the engagement and inclusion director at the SLO Chamber of Commerce, where he works with diverse local business community members to better understand their needs and represent their voices.

At night, he operates as the Gala Pride and Diversity Center president and SLO city Human Relations Commission chair. In those roles, Colyer-Worth does everything from lead cultural competency and diversity trainings, run board meetings, and sling cocktails at community parties. 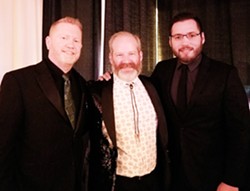 "All of my bartending skills are completely self-taught," Colyer-Worth told New Times with a laugh, noting that he honed those skills during the pandemic by crafting more than 300 original cocktail recipes.

Regardless of which hat he has on, Colyer-Worth always brings an infectious joy to his work as well as a passion and determination to advance diversity, equity, and inclusion in SLO County, according to Michelle Call, the outgoing executive director of the Gala Pride and Diversity Center.

"He has a lot of privilege [as a white cisgender male], other than being gay, and he's very aware of that and uses it for good," Call told New Times. "He's just interesting, fascinating, flamboyant, and hugely stylish."

Born and raised in Paso Robles, Colyer-Worth said he always hoped he could find a way to mesh his public relations career, which began in the San Diego area after college, with his passion for social justice after he moved back to SLO County nearly 15 years ago.

His vision came to fruition last year when he started his current role at the Chamber of Commerce, a position he'd carved out for himself over his five prior years at the organization.

"A lot of it came from both personal passions of mine, and those personal passions being supported by the Chamber of Commerce," he explained. "A core value of the chamber is that diversity is good for business. ... With that in mind, the chamber needed to create dedicated staff time and a dedicated position to advancing equity and inclusion in our community."

Colyer-Worth supports that mission at the chamber by leading diversity, equity, and inclusion trainings for all of the chamber's committees, devising new strategies to help promote local Black-, LGBTQ-plus-, and female-owned businesses, and making sure that members of marginalized communities are heard and represented at the chamber.

But there's still lots more to do, he said.

"The work is constant. We have a lot of work ahead of us," Colyer-Worth said. "But it's not just the chamber doing this work. It's the chamber trying to uplift and promote the work of other community leaders, like R.A.C.E. Matters SLO, like the JCC, like Gala."

Colyer-Worth's leadership on nonprofit boards, like at Gala, and commissions, like the Human Relations Commission, a city advisory board on social issues, gives him additional insight into the equity issues in the community.

In 2020, amid the upswelling of the Black Lives Mater movement, Colyer-Worth served on the city's Diversity, Equity, and Inclusion Task Force, which held a series of meetings that year, awarding grants to nonprofits and making long-term policy recommendations to the City Council.

Calling that an "intense but wonderful experience," Colyer-Worth said it reminded him of his position of privilege and that "the majority of my time should be spent listening and uplifting the voices of our other marginalized communities."

"My privilege comes in making sure I lead and make the space for their voices to come forward and be heard," he said.

He practiced that lesson late last year, when he attended an emotional Paso Robles High School LGBTQ-plus student rally held in response to a hate incident where some of their peers defecated on a Pride flag and posted it as a video on TikTok.

The rally brought Colyer-Worth back to his own childhood, when he was a student at Paso High, and caused a resurfacing of emotions and trauma. Ultimately, Colyer-Worth said he was inspired watching today's students speak up for themselves.

"Listening to these very brave kids tell their story—and I say brave because they were far braver than I was at that age—stand up there, and tell their truth, to be their authentic selves in front of people, and say it is not acceptable for them to be treated this way ... that's what gives me hope for the shifting in culture of the future," he said. "That's the change I see in our community and what gives me hope that things will continue to change and get better."

In that sense, Colyer-Worth said he understands that diversity, equity, and inclusion is a long game, where progress will be slow but steady as long as the community remains committed to a change in the culture. He said he believes that SLO leaders are as serious as ever about that, which is a positive sign.

"It's not going to go away," he said. "Diversity, equity, and inclusion is not going to be the buzz word of the moment and then slowly slacken off. I think what's different in this instance is the recognition that we can't let off the gas. We can't slow down."ΔΔ