Co-directors John Francis Daley and Jonathan Goldstein (Vacation, 2015) helm this Mark Perez (The Country Bears, 2002; Accepted, 2006) black comedy script about a group of friends who meet regularly for game night, but this time around, they encounter a real crime and unwittingly believe it's a murder mystery they're supposed to solve. (100 min.) 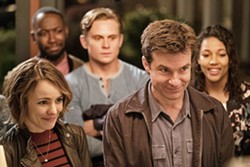 Glen Imagine the 1997 David Fincher-directed Michael Douglas vehicle The Game about a wealthy man involved in an elaborate game arranged by his brother (Sean Penn) in which what's real and what's part of the game become indistinguishable, except have it be about an average game-loving Joe named Max (Jason Bateman) and his older and in every way superior brother, Brooks (Kyle Chandler). Also imagine it a lot funnier. Game Night starts with the flashback meet-cute of Max and his now wife, Annie (Rachel McAdams, at her most charming). They gather weekly with their best friends, married couple Kevin (Lamorne Morris) and Michelle (Kylie Bunbury), and single lothario Ryan (Billy Magnussen) and his revolving bimbo du jour. Meanwhile, Max and Annie live next to Gary Kingsbury (Jesse Plemons), a cop who used to join in with game night until he and his wife divorced. Vaguely creepy, Gary continues to finagle an invite to game night but continues to be ignored. Max's brother comes to town and joins the group for game night, and invites them all to his rented mansion the following week for a game night to end all game nights. He's hired a company that stages lifelike kidnappings, and the players are given FBI dossiers by a faux FBI agent (Jeffrey Wright). When a couple of thugs break into Brooks' house and take him, the five players—and Ryan's smarter-than-usual game partner Sarah (Sharon Horgan)—assume it's all part of the game. Except it's not. Soon they're involved with real thugs, including The Bulgarian (Michael C. Hall) and Donald Anderton (Danny Huston). What ensues is an amusing comedy of errors with some laugh-out-loud moments that don't quite live up to the hype this film's been getting.

Anna This movie has a cast who knows how to do funny and a plotline ridiculous enough to give them room to do some pretty zany stuff, but I agree that it doesn't quite hit it out of the ballpark. Game Night sits at a 7.6 meta score on imdb.com, and audiences rate it quite a bit higher than critics on Rotten Tomatoes, and that all makes sense to me. It's good but not great, funny but not hilarious. I'm a big fan of The Game, and the similarity in premise, albeit with a less sinister feel and a whole bunch more comedy, is undeniable. Did someone get stoned flipping through channels, see it on TV, and decide to funny it up? Just guessing! Bateman is his usual self as Max, smart and confident for the most part, at least until big brother Brooks shows up. He's never won a game against his brother, a point that drives his competitive nature up the wall. Brooks has always been just a little more successful, a little more handsome, and a little more loved by those around him. Who wouldn't be annoyed by a sibling like that? No one else seems to see it though, until while in a meeting with their fertility doctor, Annie puts together that Max's stress skyrockets whenever Brooks comes to town. Soon she's on Max's side to try and team up and beat Brooks any way they can at his epic game night. McAdams is particularly funny and adorable in her role, and she and Bateman work well both as a comedy duo and a believable romantic pair.

Glen Funny you should say they make a believable pair. Arts Editor Ryah Cooley pointed out that there's a considerable age difference between the two. I looked it up, and it's only 10 years, but Ryah thinks it's typical Hollywood May-December bias. Still, I agree they're funny together. The oddest part of this film, which in some ways turns out to be the best part, is Gary the cop. Ever since Plemons' turn as Todd in Breaking Bad, every time we see him in anything you mutter disgustedly under your breath "Todd." Here he really turns on the social outcast vibe. Every word he speaks is unduly formal, and we learn he has a deep obsession with his ex-wife. He's an outcast to the group, but as the game proceeds, they discover they need him—or at least access to his cop computer. There's some great comedy involving his dog and Max's bleeding wound, but Gary also becomes a big part of the ending of the film, and we discover he's been involved in the game in surprising ways. Turns out he's a better game player than everyone thought. If I paid for a matinee I'd probably be OK with it, but to me this is more of a rental. You certainly don't have to see it on the big screen to appreciate it. If you're a big comedy fan, maybe it's worth it. The costars are great, especially Morris' Denzel Washington impression, but I'd feel a lot better about renting this film for $1.62 at Redbox.

Anna I don't think 10 years is much of a stretch in Hollywood standards. I've certainly seen much wider age gaps in costars, and it doesn't always mean implausibility in the pairing. After all, age difference doesn't define chemistry between actors nor people in general. I'd guess both Bateman and McAdams were given these roles based on their talent and comedic skill, not their steamy, sexy chemistry that was pretty much unneeded for this sort of silly, slapstick movie. I also liked Morris as Kevin; he cracks me up as Winston in New Girl and did so in Game Night as well. Gary the cop is everyone's nightmare of a neighbor—creepy, lurking, overly attached to his dog, and very aware of any and all activity in the neighborhood. Luckily Plemons has managed to win me over as more than just a character I hate. Watching him in the TV show Fargo showcased a great range of character for him, and he was also memorable in his performance in The Post. While the plot twist and turns get ludicrous and messy, if you just sit back and let the film play out, you can have fun with Game Night, and some people in the audience were truly cracking up the entire time. For me, this makes sense to rent as well, or maybe catch it at the drive-in for date night if it plays there. Δ