Hudson also loves books, an infatuation immediately apparent to visitors in his small bedroom/art studio, which boasts hundreds of novels but no bed.

History can join that list of favorites, too, as it’s the source of many of the stories he so desperately wants to tell.

The problem is, a week and a half before the show’s opening, he was still overwhelmed by the sheer number of stories in need of telling—sea tales, woodman tales, western tales—and hadn’t yet settled down to the business of translating them into art. A carved linoleum block sat on his desk; the block featured “Rust Never Sleeps,” the show’s title, on one half and a portrait of Abraham Lincoln on the other.

He learned to carve linoleum blocks specifically for this show, using small tools to scoop out unwanted scraps. The goal was to then create handmade books. But as the opening approached, he decided to put the book project on hold.

Hudson is one of Breton’s “DIY kids,” part of a movement Breton wants desperately to get off the ground. The two met at a group show at Jeff Claassen’s gallery several years back. Both had contributed artwork to the show, though they got off to a rocky start.

“I just found out that he thought I hated him,” Hudson said recently.

For his part, Neal had a revelation, too: “For the first year that I knew him, I was completely intimidated by him.” That’s a pretty telling statement from a guy with a beard like a Cuban revolutionary.

When Breton opened his art supply store in the summer of 2009, the two began to talk more. Hudson was still fairly new to the area; he moved here from Los Angeles in April 2007, hoping to learn to tattoo. He now works as a tattoo artist at Tried and True Tattoo in Grover Beach. Recently, he tattooed an image of Breton’s face onto a mutual friend.

“I grew up around tattoos,” Hudson explained. “My parents have them. I just always thought it would be cool to do them. It would be a way to do art for a living.”

When he wears a dark hoodie and jeans, only Hudson’s arms below the elbow and hands are visible. But that’s enough to reveal an intricate network of images and text. When he folds his fingers together, they flash a single word, “sobriety,” an expression of Hudson’s desire for control of his life.

Oddly, his focus on tattooing has impeded on the time he would normally spend on other mediums: watercolors, acrylics, ballpoint pen, and pencil. Mostly, Hudson exhibits his work in Los Angeles. He doesn’t make a practice of pursuing venues for shows. In fact, he studiously avoids the crowds and small talk that fill an opening reception.

“Once I started tattooing, I tried to focus on that,” he admitted. “It’s still hard to do both. I tend to stay away from stuff like this. Neal made me do this.”

Besides the handmade books that may or may not appear in the show, Hudson estimated that he’ll present 12 to 15 pieces, mostly smaller watercolors and drawings. He doesn’t like to work big. The artist also intends to construct a rarely sighted installation. His plans include blocking out one of the shop’s windows with wooden planks and littering the construct with Victorian photographs that he collects and assorted ephemera.

Hudson’s standard artistic repertoire mostly consists of sad characters, figures that reflect a strong tattoo art aesthetic. He likes to paint in the cool and quiet of the night and insists that his obsessive phases of art-making run contrary to most people’s social inclinations.

“If I paint how I want to paint and draw, then that’s all I’ll be doing, and people are needy,” he observed. 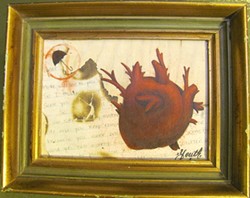 Besides reflecting Hudson’s penchant for nostalgia, the exhibit—as suggested by the title—will likely convey a gloomy message of impending cultural decay. Though Hudson has always envied cultures with a strong oral storytelling tradition, he’s never had the opportunity to experience this art, which remains a cultural mainstay for many. Because of this, he doubts his own authority as a storyteller and questions his place within the broader storytelling tradition.

“My goal is just to tell the old tales, whether or not it stays with anyone. Well, hopefully it stays with people,” he confessed. “I almost feel like it’s not even my place to do this. I don’t know if it’s my place to tell these stories. I’m not trying to exploit it or anything.”

But the beauty of stories is that they come without a price tag, and the teller is by no means the owner or sole purveyor. What will come of Hudson’s storytelling debut is anybody’s guess, but it’s certainly worth a jaunt down Morro Street. It’s not often that history, folk tales, and tattoos share company in San Luis Obispo, but the gathering promises to be provocative and nostalgic.