When Nayvett Chavez thinks back to her childhood, she finds herself standing in the kitchen, the scent of carnitas seasoning the air. The impassioned, undulating voices of her grandmother and great aunt rise above the simmering pork like a screeching teakettle.

“Imagine two Latin women yelling over the stove,” Chavez said with a laugh. “I wish YouTube had existed back then; it was the cutest thing. Their arguments were amazing. One would say to the other, ‘No. Put this much of this spice in that!’”

Today, sitting in the waterfront dining room of her father’s new Morro Bay restaurant, the photography student/assistant manager is again surrounded by the Mexican flavors she’s known all her life—but with a twist.

“It’s not typical Mexican food. There’s a spin on everything,” said sous chef Lisa Chamberlain. “There’s a lot of South American flavors, and we’re using a lot of fresh fruit, pineapple, and jicama. We’re excited about the food, and now we just need people to know that we are up here.”

Over the past three weeks, locals and tourists have climbed the stairs to Gaviota Grill and taken a flavor detour off the Embarcadero. Truth be told, some patrons have already found their favorite dishes.

“Some folks just come in to order a beer and a cheesecake chimichanga,” Chamberlain said. What’s a cheesecake chimichanga, you ask? Basically, it’s a warm, crunchy churro filled with luscious cheesecake, topped with cool ice cream and swimming in brandy, cinnamon sugar, black salt, and house-made caramel. It’s sweet. It’s salty. It’s savory. It was gone the moment I set eyes on it.

The Chavez family has owed five Central Coast restaurants to date, but none have ventured far from Santa Maria-style barbecue or traditional Mexican fare.

By comparison, the menu at Gaviota Grill is innovative and a bit daring. A fusion of global flavors—including a lively dose of Argentinian moxie—adds a zesty kick to enchiladas and whole fried tilapia.

Energetic Head Chef Jesse Morrow is just 25 but has already dedicated a decade of his life to cooking. 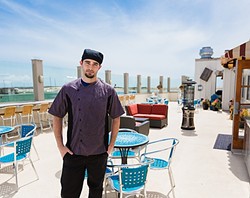 “We’re not limiting ourselves to just ‘American fusion,’ and you’ll also taste some Thai influences mixed in with the Latin flavors,” Morrow said. “We’re really doing a bit of everything.”

“Everyone on the Embarcadero is doing the same New England-style clam chowder and fish and chips,” Morrow said. “With our fish and chips, instead of a plain, mayo-based slaw, we are doing an Argentinian slaw. We’re also using an Argentinian batter that leans toward a bolder flavor profile. Our chowder provides the comfort you want, but there is a bit of spice, too. You’ll get that warmth on the back of the throat.”

I’m a sucker for heat, and I have to say Chef Morrow did not disappoint in this regard. Although the second-floor eatery could rely on its crazy seaside view (or vast rooftop patio), the food remains the star of the show.

As Chavez served me a sizzling plate of chile relleno stuffed with chicken, spices, veggies, and topped with cilantro serrano cream sauce, she stopped to see what kinds of “good food noises” I would make. I delivered the goods in between big bites of rice, chicken, and pepper.

To be sure, the food honors the recipes Chavez’s father (first-generation Mexican-American) and grandfather (originally from Mexico) grew up on, while pushing the envelope farther still. Think Mexican, expanded. Revamped. Remixed.

Although Chavez never got to meet her grandfather, she lives in the house he built in Guadalupe some 35 years ago. The more I learned about the man, the more I realized that Gaviota Grill would have never have opened its doors without his legacy.

“My grandfather came over from Mexico in the ’60s as part of the Bracero movement,” Chavez said. “He worked with broccoli, cauliflower, lettuce, and I wouldn’t be surprised if there were some strawberries, too.”

As a temporary contract farmworker, he worked for the Tognazzini family, among others, digging his hands into the fertile Los Osos-area soil. Three years later, Chavez’s father, Gilbert Chavez, was born. Glibert went on to start his own catering company and Pismo Beach-based Sabor a Mexico before opening Gaviota Grill.

Three generations later, Gilbert’s own daughter, along with son Jonathon, are carrying on that old culinary torch. Coming of age in Guadalupe, the kids grew up surrounded by flavorful food—and stories to match.

“There was an underground bar under the Far West Tavern during Prohibition, and both my dad and grandfather got to see it,” Chavez said. “Hey, I could tell you stories all day long.”

If you want to hear more of those stories—and eat your fill of satisfying, unpredictable grub—I suggest making a beeline for Morro Bay. Oh, and don’t pass on the cheesecake chimichanga. If an afternoon at Gaviota Grill has taught me anything, there’s beauty in the unexpected.