What do you remember from your early childhood education? If you're a product of public schools, it was probably how to be quiet, get in a straight line, and sit down when told to. But is teaching children to follow orders the best way for them to effectively learn? A lot of alternative systems have been developed from Montessori to Waldorf to the Reggio Emilia approach, and in Jasmine Star Horan's new book, Gazebo Learning Project: A Legacy of Experiential and Experimental Early Childhood Education at Esalen, she chronicles another alternative: the Gazebo Park School approach. 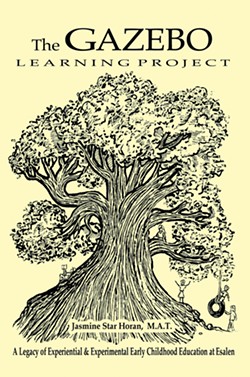 "It began as a human potential experiment at Esalen Institute that grew into an early childhood center called Gazebo Park School that operated there for 40 years," Horan explained in press materials. "The place was a magical park, a creative outdoor space designed by children for children."

In her book, she shares the school's "unique pedagogy that encompasses the belief that human potential movement begins in childhood," Horan continued. "The book is focused on the core principles and practices of the Gazebo program such as Gestalt practice, the unique role of the teacher, the empowering view of the child, as well as the value of nature education and pure play."

Horan has intimate knowledge of the program, which was created in 1977 by teacher and former Esalen Director Janet Lederman to educate the children of Esalen workers. Horan was born and raised at the famed Big Sur retreat and educated at the Gazebo Park School. Later she received bachelor's degree in English with a concentration in writing from Southern Oregon University, and a master's in teaching from Oregon State University. Then she returned to her roots to teach at Gazebo Park School.

That teaching experience led her to see and understand her "own childhood through adult eyes as a writer and educator," leading her to "conceptualize her experience as a child" and inspiring her to write the book as she recognized what a unique education the Gazebo Park School offered her. 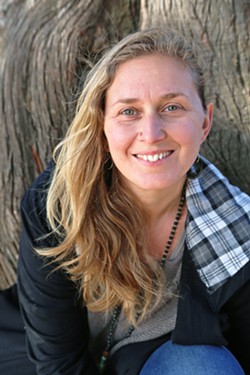 If you've ever been to Esalen, you already know what a singular place it is. Perched on cliffs above the Pacific Ocean, it's captivatingly beautiful and gifted with natural hot springs. Overnight visitors often share living spaces with strangers. The last time I was there, I shared a room with a famous Hollywood actor and a dotcom multi-millionaire. Meals are communal, consisting in large part of organic produce grown on the retreat's grounds.

Established in 1962, the nonprofit intentional community offered workshops in yoga, Gestalt practice, meditation, massage, psychology, and more. You might even argue it set off the New Age movement. It makes sense that Esalen would develop a progressive nature-centric education system that emphasized learning through play.

Until 2016, Esalen offered about 500 workshops a year for around 15,000 guests. In February of 2017, Esalen was cut off when Highway 1 was closed by mudslides on both sides of the hot springs. Guests were evacuated via helicopter, and 90 percent of its staff was laid off. The Gazebo Park School's 40-year experiment in early childhood education came to an end, but Horan's book commemorates the school's philosophy and approach to education.

According to Horan, the book offers insights from more than 50 Esalen community members "including many workshop leaders whose work was germinated through their experiences as Gazebo teachers."

She says the book is for "parents, educators, homeschooling families, therapists, and those who simply love Esalen. At the intersection of education, parenting, and self-inquiry, this is model of a human potential pedagogy which responds to the current moment and how we must rethink the ways we educate children, how we treat each other and the Earth. This book offers an integral model for how children and adults can mindfully grow together through their physical, spiritual, emotional, and neurological learning processes in a nature-based environment. By consciously cultivating emotional intelligence and eco-literacy, children and adults can build skills for social and ecological activism needed for these times."

According to the Esalen website, "Today Gazebo's spirit lives on in Big Sur Park Forest School, which serves the local Big Sur community for children ages 2 to 6 at Esalen and other locations."

Gazebo Park School may be gone, but its ideas remain in both Horan's book and the Big Sur Park Forest School, where "confidence, resilience, and social-emotional awareness are cultivated through a relational, child-centered learning approach and an emergent curriculum."

Be quiet, line up, and sit down? No thanks. Δ