Gearing up: San Luis Obispo has a new plan to move forward with the Railroad Safety Trail for bicyclists

Throughout the many years bike advocates and San Luis Obispo city officials have worked toward completing the Railroad Safety Trail, the main obstacles have been building the trail along the railroad and making the route safe for bicyclists.

The trail idea has long been a tricky one for cyclists in the city. While the goal was to build a cohesive, protected pathway stretching up from the most southern end at Orcutt Road to Cal Poly, the path remains a patchwork of disconnected segments. 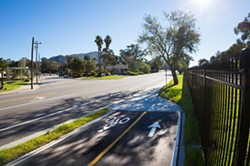 As funding became available to move the project forward, city officials faced difficulties, primarily when it came to building new segments of the path near the Union Pacific Railroad tracks. One of the particularly headache-inducing segments lies along California Boulevard heading over Highway 101.

In fact, in the city’s 2013-15 Capital Improvement Plan, officials included a planned project that would extend the path along California Boulevard over the 101, then along a new bridge to be built behind the California Highway Patrol headquarters.

However, the project estimate came in far over budget, with a preliminary engineer’s estimate showing a construction cost of $5.1 million, which was about $3 million more than expected.

City officials now have a new plan, which will provide at least temporary relief for bicyclists while a long-term solution is implemented. And on Nov. 18, the SLO City Council unanimously approved the plan, with an estimated construction cost of about $1.05 million.

The goal is to build a two-way bike trail—or “cycle track”—along California Boulevard to Phillips Lane. The new route will take bicyclists over Phillips, then across the tracks on a new bridge that will land at Pepper Street.

“The interim solution slowly builds to the long-term solution, which is getting complete Class 1 [bike paths] all the way through town,” said Eric Meyer, a former city planning commissioner and one of the more prominent advocates for bike infrastructure in and around SLO.

Though Meyer doesn’t talk about the interim plan as the ideal solution, he said it will provide a safer route for bikes in the short term, allowing city officials to continue to work toward a more contiguous path and reach an agreement with Union Pacific officials.

Indeed, the new route could provide cyclists a way to avoid one of the more dangerous areas of the city, historically speaking.

According to bike collision maps developed by Cal Poly multimedia journalism students, the intersection of California and Monterey was a site with one of the highest rates of bike-vehicle collisions in the city between 2008 and 2011. Based on public data from the California Highway Patrol’s SWITRS database and BatchGeo.com, the students’ map reveals a hot-spot of collisions in the area, with seven injury accidents.

According to a city staff report, the “cycle track” will “provide a clear visual buffer between vehicle and bicycle traffic. Some cyclists have been observed traveling in opposition to traffic in this area, so the wider buffered lanes will provide an improved condition.”

Part of the funding for the project will come from a state grant, originally approved as part of a planned bike bridge over Highway 101. City officials were able to modify the grant and devote about $153,000 of its funds to construction of the new project, according to a staff report. But the funds are tied to an April 1, 2015, deadline, at which point the city must spend the money. Because of that deadline, the city made plans to begin project construction in January.

Other bicycle projects are in the works, as well. If approved—and, more importantly, funded—the Chorro Valley Trail and Edna Valley-Price Canyon Anza Trail could provide Class 1 bike paths coming into SLO from Morro Bay through the Chorro Valley, and from Edna along Highway 227.

SLOCOG now has a completed feasibility study for the Chorro Valley project, which notes at least a $14.4 million price tag to build a path that would provide connections between Cal Poly, Camp SLO, Cuesta College, and El Chorro Regional Park.

For the Edna Valley trail, which isn’t as far along in the planning stages, SLOCOG has put out a Request for Proposal to consultants for a feasibility study similar to the Chorro Valley study.

“These things are obviously pretty pricey,” Murphy said. “These [studies] were just to get a sense of magnitude of cost.”

Within SLO, future bike projects could have a better shot at obtaining funding. The recently adopted Land Use and Circulation Elements update to the city’s general plan included a 20 percent dedication of city transportation dollars to bike projects. But Meyer said getting those projects funded will still require a show of force from residents being the so-called “squeaky wheel.”

“If nobody gets out and actively lobbies for what they want, it will probably take longer,” he said.