Geeks of the world, unite!

Scott Melot smiles like a cartoon. His is the kind that seems to come out of nowhere and briefly take over his entire face, Cheshire cat-like, as if the Anime Five Cities convention chair were himself an animated character. 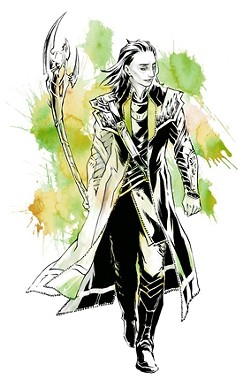 And who’s to blame him? This time of year, he has plenty to be animated about. The local anime convention organized by Melot and founder Paula Angeles is about to have its third, and most awesome, run. The event, which began in Avila Beach in 2010, later moving on to its current digs at the Ludwick Community Center in San Luis Obispo, has become the anime geek’s equivalent of the social season. Somehow, Anime Five Cities, or AFC, manages to take a Saturday and stuff the following into it: a cosplay contest; a video game tournament; a fan art exhibit; and panels with cosplayer Erika Peterson, manga illustrator Irene Flores, and voice actors Lauren Landa and Jason Charles Miller—who will also give a live musical performance.

The convention attracts not only fans of anime and Asian pop culture but geeks of all stripes, a term Melot has begun to embrace. In fact, a positive focus of geekiness, he says, is what makes any such event possible.

“I mean, geeks and nerds—or otaku, whatever term you want to use—we’re an obsessive bunch,” he explains. “And it’s through focusing our obsession that we kinda create these really cool things. Some of us become organizers, or costumers, some of us get into music, someone will focus their energy into original songs.”

(I later looked up otaku on urbandictionary.com and discovered its two meanings: in Japan, an obsessive, even sociopathic, shut-in; in American anime and manga culture, a more positive word for a zealous fan. It’s the latter, of course, that Melot and Angeles hope to attract.)

It’s this positive obsession, too, that brings such a diverse range of fans to AFC. In addition to the expected Pokémon characters and Vocaloid singers who show up to the convention, organizers also notice elaborate fan costumes from Batman, Star Wars, and even Ghostbusters. This mixing of nerd genres has always puzzled me. Yet talking to Melot, I begin to slowly understand why you occasionally see Captain America at the Renaissance Faire, or Darth Vader in line for the midnight screening of Harry Potter.

When it’s done right, there’s something wonderful about being really, really into something. It’s what led illustrator Flores to create an awesome fan art series of Avengers heroes and villains re-imagined as anime and manga characters, which the guest of honor will be sharing at the convention. It’s the why cosplayer Peterson learned to dye, sew, and craft costumes by hand. It’s what leads organizers to pour countless hours into the convention in the first place, and it’s the reason fans flock to it.

He flashed his cartoon grin.

Does Arts Editor Anna Weltner turn into a giant panda when she gets wet? Contact her at aweltner@newtimesslo.com.