Pierre Morel (District B13, Taken, The Gunman) directs Chad St. John's (London Has Fallen) action-thriller script about a young mother (Jennifer Garner) with nothing to lose, out to avenge the deaths of her husband and daughter who were killed in a drive-by shooting. (102 min.) 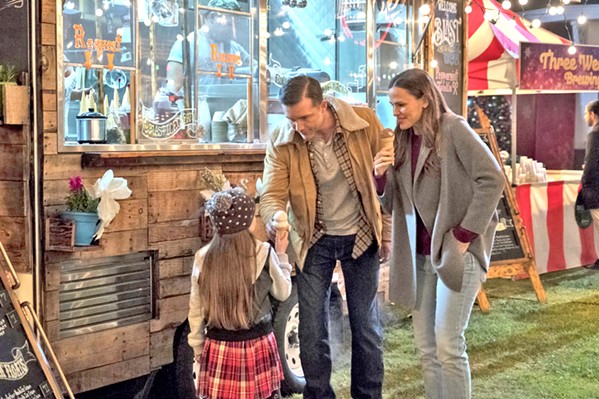 Glen Welcome to the end-of-summer dumping ground, where terrible films try to squeeze the last few bucks out of the film-going public. Peppermint had potential. Pierre Morel directed the wildly successful 2008 Liam Neeson vehicle Taken, which injected effective emotion and real drama into the often-tired action genre. Sticking a strong female lead like Garner into a vigilante role usually reserved for a male star might have added a feminist twist to the proceedings. But alas, Morel's direction is pretty standard and wholly underwhelming, especially in close-quarter fight scenes that worked so well with Neeson in Taken, and instead of a female lead turning the action genre on its head, we basically get a woman in a man's role acting just like a man. Sure, there's a little subplot with Garner's Riley North acting as guardian angel to the residents of L.A.'s skid row, but nothing much is made of it. There's even less made of the five-year backstory in which Riley, after the death of her family and being denied justice by a corrupt system, goes on a world tour where she supposedly learned all manner of combat techniques. The entire backstory is given mere minutes and one video clip of her cage fighting in some Asian country. This feels like fly-by-night, in-and-out, no-time-for-a-second-take filmmaking.

Anna It certainly would have made for a more interesting overall story if we got to see what Riley went through to become a badass vigilante; at least it may have offered some dimension to this very flat film. Riley's life is quickly summed up in the first few scenes: She's a doting mother and wife trying to do it all. Her boring bank job just helps the young parents scrape by, and the rival Stepford mothers of the school look down on Riley and her family with disdain. That's pretty much what we get as far as setup goes in this film, except for a loose string side plot involving Riley's husband, Chris, that sets up the drive-by shooting. I like Garner, and while I have no doubt the woman could kick my ass to the pavement no problem, there just isn't much for her to do here except emote sadness and kill off anyone who steps in the way of her vengeance. It's a totally forgettable film that at almost two hours starts to feel a bit like a chore. Frankly, I'm surprised audiences have rated it so highly on Rotten Tomatoes. It isn't painful, but it isn't fun—I'd much rather re-watch Taken than this underwhelming attempt at vigilante justice. 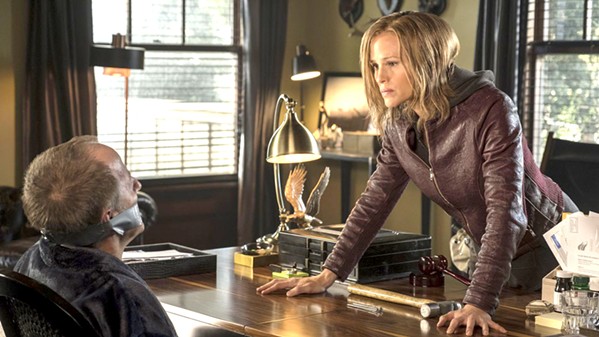 Glen Part of the story has to do with the two LAPD detectives working Riley's case—Stan Carmichael (John Gallagher Jr.) and Moises Beltran (John Ortiz)—who worked both her family's murders and the vigilante killings she commits upon her return five years later. There's a bit of intrigue concerning dirty cops within the LAPD, and to further convolute the proceedings, FBI agents Lisa Inman (Annie Ilonzeh) and Li (Eddie Shin) also join the investigation after Riley kills Judge Stevens (Jeff Harlan), who corruptly let the original killers go free. As for those drug-dealing gangbangers who've become Riley's targets, it's hard to keep track of who's who or to even care. Aside from distinctive-looking character actor Richard Cabral, the bad guys are interchangeable Hispanic men. Even the drug kingpin Diego Garcia (Juan Pablo Raba) is forgettable. The gulf between the Rotten Tomatoes' critic and audience score is vast—14 percent critics to 82 percent audience—so clearly some viewers are liking Peppermint even if critics aren't. If you're a Jennifer Garner fan or you love revenge flicks, maybe this is worth a trip to the theater, but I'd have been fine waiting for it to show up on Netflix. It's wholly forgettable.

Anna I agree, and while action movies can gain a lot from a view on the big screen, the tight yet sloppy way the fight scenes are shot leaves quite a bit to be desired. I doubt you'll lose much if you wait and watch at home. There doesn't seem to be enough here for me to justify the ticket price even for a matinee. Even the film's name seems derived from a scene that ended up on the cutting room floor. The filmmakers must have been so eager to get to Garner kicking bad-dude butt that they decided developing a backstory was a waste of time. While Riley's motivation is clear, her path to the end result isn't, and what's meant to be surprising in the end falls flat—the script backs itself into a corner it can't get out of. If you need a dose of female badassery, how about a re-watching The Long Kiss Goodnight or the more recently made Atomic Blonde? I'm guessing you'll be much more satisfied and have movie money left to see something that rises above mediocre. Δ