Judging from Unfamiliar Faces, his impending follow-up to his 2005 debut Songs We Sing, it's easy to see that former skate rat-turned-singer/songwriter Matt Costa pens a mean tune. His clever songs generate an immediate likeability: bouncy, welcoming, full of memorable (but not cloying) hooks. 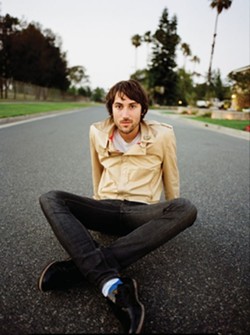 # For Unfamiliar Faces, Costa took his most treasured belongings and put them on a shelf, then stared at them and just let the memories flow.

"That way I could see everything that I loved," he explained (the collection included his favorite books, a giant wooden pipe, and a box of old 45s from the late '50s). "I let my imagination wander. Regular life isn't as exciting as an imaginary life."

His imagination must be pretty entertaining, because his real life was kind of crazy in and of itself. He grew up next door to a pet cemetery (weird!), played trumpet and piano, gave his first impromptu performance on a houseboat, and became a pro skateboarder until a life-changing leg break turned his attention to songwriting during the painful healing process.

He wrote some songs on guitar, befriended No Doubt guitarist Tom Dumont via the vibrant SoCal arts scene, and recorded Songs We Sing with Dumont as his guide.

"One of the first things he told me was 'Stop practicing so hard and let the feeling come out,'" Costa said. "It stuck with me because that's the key to music. The light went on in my head."

If you're a fan of Ben Folds, the Shins, or Spoon, you'll want to check out Matt Costa on Wednesday, Jan. 23, during a free in-store appearance at Boo Boo Records at 6 p.m.

Costa doesn't have another gig that night, so he'll be hanging out and signing copies of his new CD for fans. The disc comes out the day before his show. Be the first to get one!

In a last minute add, Downtown Brew has booked a show that's got a little something for the indie music scenester in all of us. On Friday, Jan. 18, three acts will drop their emotive little nuggets of heartfelt song beginning at 8 p.m. for a scant $8.

# First up is local rocker Derek Senn, one half of the Wedding Industrial Complex, who's playing solo so his drummer-wife Melanie can stay home and take care of their two younger-than-2 little dickens.

"It's going to be an acoustic set of mostly child-rearing themed songs," Senn said. "I'm calling it the 'Two under 2' tour, but it's not really a tour because I think you need multiple dates for that, so I guess it's more of a one night stand than a tour, because I am not playing multiple dates."

Next up is JT and the Clouds, a great Chicago-based act who first released Delilah in 2003 and is about to release a sophomore album, The City's Hot Yeah The City's Hot.

"We say we play soul music, but we got a pretty wide definition of what that is: Stanley Brothers, Talking Heads, Sly--they're all soul to us," the band says on its MySpace page. Their six-song demo EP jumps from R&B to Latin with Ween-like dexterity.

Headlining the evening is Sofia, a female duo featuring Allison Russell and Awna Teixeira, both talented multi-instrumentalists whose soulful harmony vocals will get under your skin. 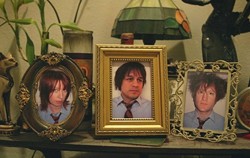 # According to Rock Sisters promoter Leanne Phillips, "This is a Templeton High reunion of sorts--vocalist and guitarist Steven Perry graduated from Templeton High School (the same year as KZOZ DJ and Axia drummer Dusty Rhoads). Perry is inviting all his friends and classmates to come hang out and catch up. Cult of Sue Todd has received stellar reviews for being not only talented, but entertaining and funny as well. One reviewer wrote of the band's live performance: 'When you're this entertaining, it really doesn't matter just how much sense your songs make.' Their CD, Kelsey Grammer Loves Us, met with much critical acclaim. They're now on tour promoting their most recent CD release, Not."

Get a jump on Valentine's Day when jazz vocalist Mellonie Irvine performs with the Mike Raynor Group on Friday, Jan. 18, at the Inn at Morro Bay from 7:30 to 10:30 p.m. Last year, Irvine released You've Changed, a collection of music for lovers. "My CD is a romantic mood album," Irvine said, "the kind you'd want to put on when you want to spend a romantic night at home with someone you love." Meow! 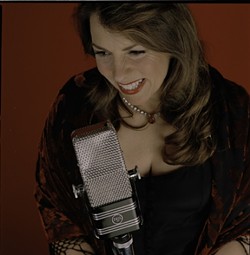 # The Seattle-based unsigned rock/reggae band Get Down Moses plays Frog and Peach on Friday, Jan. 18, at 10:30 p.m. "We make our unique sound by mixing traditional reggae grooves with rocking guitar, syrupy Hammond organ lines, and intelligent, fun lyrics," said singer/guitarist Cale. "We're on a short, self-funded tour down the West Coast--starting in Seattle and stopping in Oregon and California." Check out their music at www.myspace.com/getdownmoses.

Mike Lopez is back at the Pelican Point on Friday and Saturday, Jan. 18 and 19. Formerly of The Goods band, Lopez returns with special guest artist Jeff Elliot on the 18th, when they'll perform danceable tunes with a splash of his original songs. Lopez flies solo on the 19th.

What's hotter than a bunch of straight guys dressing up like gay sailors and glam rockers to cover Turbonegro songs? Almost anything! But that won't stop Sexy Time Explosion from sex-plosioning all over the Downtown Brew stage on Saturday, Jan. 19, at 8 p.m. for an 18-and-older show that also features The Cruel Romeos, AOD, and a band that actually is sexy, Romeo and the Juliets. Tickets are $9 at the door.

On Saturday, Jan. 19, local composer/musician Garry Eister will present "an evening of music and stories and stories in music." He'll premier several songs from his song cycle "Folk People" for male voice and resonator guitar. Eister will also play some classical guitar solos from his recent album, Galloping from Versailles, and sing the song cycle, "The Short Man" for tenor and electronic soundtrack. If you've never witnessed the weirdness that is Eister, get your keister to Steynberg and check out this hidden gem--he'll challenge your aesthetics! This 8 p.m. show costs $10 at the door.

Los Angeles-based indie folk rock band Nellie Bly shares a bill with Val Esway and El Mirage on Saturday, Jan. 19, at O'Reilly's. According to Rock Sisters promoter Leanne Phillips, "Nellie Bly has been called the 'more hummable side' of one of my new favorite

# indie rock bands, Breech, which the Rock Sisters also hope to bring to the area soon." The show starts at 9:30 p.m. and the cover is $2. Nellie Bly is also performing a free, all-ages acoustic set at Boo Boo records Saturday afternoon at 5 p.m.

Inveterate folk performers Bob and Wendy will bring their original Americana music to the Steynberg Gallery on Sunday, Jan. 20, at 3 p.m. Guest rhythm section Tim Novoa on drums and Travis Harms on bass will fill out the duo's sound, making them a quartet for a day. Tickets are just $5 at the door.

On Sunday, Jan. 20, alto saxophone legend Lanny Morgan will be the next attraction at the Famous Jazz Artist Series at the Hamlet in Cambria. Long recognized as one of the world's leading jazz artists of the alto sax, Morgan will be accompanied by a dynamic all-star rhythm section consisting of pianist Tom Ranier, bassist Tom Warrington, and drummer Joe LaBarbara. Concert series co-producers Charlie and Sandi Shoemake (vibraphone and vocals) will also be on hand. See him at 4 p.m. for $15 or 7:15 for $12 (or both for $20). Reservations are highly recommended by calling 927-0567.

Nashville-based vocalist/composer Rebecca Sayre plays the Tuesday, Jan. 22, Songwriter's Showcase from 7:45 to 8:30 p.m. (the whole show is from 6:30 to 9:30) at the Clubhouse at This Old House. The show is free and open to all ages. Really. Editor Ryan Miller took his baby to see a set there once.

Hot Buttered Rum will be pouring out the front doors of Downtown Brew again when the bluegrass quintet returns to town on Wednesday, Jan. 23. Technically speaking, calling these guys bluegrass is a bit of a misnomer. In fact, the band melds blues, folks, bluegrass, jazz, and rock into its own style--they just happen to play these varied genres on traditional bluegrass instruments. The 21-and-older show starts at 8 p.m. and costs $13.50 advance (ticketweb.com, Boo Boo's, and the venue).

# Ground control to Major Snow, what's up with your weird e-mail? The Snow wrote to tell me about their gig: "We are The Snow. We are a space rock group from Los Angeles. We are about to release our debut record. We are playing a show to promote it at Frog and Peach on Wednesday, Jan 23. We would like to submit this date for the calendar. Let us know if this is possible. Also, we would like to send in our new CD for review." I think this may be a band of robots, and something doesn't compute, because I wrote them back and requested said CD but never received it. See The Snow at your own risk. They may be mutant robots hell-bent on destroying humanity one concert at a time. Danger, Will Robinson, danger!

David Lindley fans, mark your calendars because the world music superstar and multi-instrumentalist extraordinaire returns to the Central Coast on Thursday, Jan. 24, at Downtown Brew with local act Still Time opening. Advanced tickets are $20 (ticketweb.com, Boo Boo's, and the venue). This is a 21-and-older show.

The City of Paso Robles Department of Library and Recreation Services and REC Foundation are currently accepting band demos for the 2008 Concerts in the Park series. Interested musicians have until Friday, Feb. 8. All bands should submit information including a demo CD or tape, band biography, and a photo. Information packets can be dropped off or mailed to Nancy Joynt, city of Paso Robles, Centennial Park, 600 Nickerson Drive, Paso Robles, 93446. Concerts will be held on Friday evenings from June 20 through Aug. 29 at the downtown City Park gazebo. For more info, call Nancy or Rose at 237-4741.

# With the album title also functioning as a warning placard, Stephin Merritt navigates his Magnetic Fields outfit into seas of feedback-drenched instrumentation without a route to perfectly manicured pop melodies. Then again, they are shaded by the dense fog of, yes, distortion. Taking the sonic reverb-saturated aesthetics of Jesus and Mary Chain's landmark album Psychocandy as their blueprint, Merritt adds layers of quavering sheen to the guitar, accordion, and even piano, obtaining a sound that's more monumental than any of Phil Spector's noted "walls of sound." But beneath these aural grandeurs still exists the morose vocals and snarky lyrics Merritt is cherished for: "California Girls" hijacks the sunny pop admiration of the Beach Boys with loathsome wrath and the spiteful hook of "I hate California girls." "Too Drunk to Dream" excuses the broken romantic heart for dipping heavily into a night of alcoholic binging. And with the addition of the sweet-voiced Shirley Simms, the pop appeal just gets exemplified further.

# As Reverend Horton Heat, Jim Heath has surely burned down his fair share of stages with his high-octane brand of rockabilly revivalism. But now, Heath down-dresses his previous antics and forms a trio to explore the vintage music he's passionate about, as well as keep the dust off his Gretsch guitar. Here arrives Reverend Organdrum, a mostly instrumental trio equipped with Hammond organist Tim Alexander (Asleep at the Wheel and RHH alumni) and Texas drummer Todd Soesbe. Containing the organ soul sounds of Booker T and the MG's along with the retro garage surf hijinx of Los Straitjackets, Rev. OD plays swing, standards, TV and movie themes, jazz, and anything else Heath has absorbed by means of a radio and antenna. And true enough, partway through the Booker T classic "Can't Be Still," Todd's marvelous crisp drumming is allowed to flail freely with a Black Sabbath riff. As surprisingly fun as it is intoxicatingly addictive, this could be a mechanic's new best friend.

Glen Starkey has the Midas touch--everything he touches turns into a muffler. Ask him if he does brakes at gstarkey@newtimesslo.com.