Magazine Dirty wants to drag you into the garage! 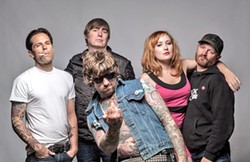 Magazine Dirty plays dirty, filthy, disgusting punk’n’roll. They’re noisy. They’re abrasive. They’re raw. They’re everything rock’n’roll was before professional “producers,” commercial pandering, and, most recently, auto-tuning took rock out of the garage, out of the shadows, and into shiny, happy pop culture. Well, fuck that. Magazine Dirty would rather piss on shiny, happy pop culture, then drag it into the alley and stomp its ass.

You can witness the mayhem that is Magazine Dirty when they play an album release party for their self-titled debut on Saturday, June 29, at SLO Brew (doors at 7 p.m.; all ages; $7 presale or $8 at the door). King Walrus and American Dirt open the show.

The Magazine Dirty record, a collection of 12 garage rock anthems and one hidden techno track you’ll hear about four minutes into the 13th track, definitely kicks some sonic ass. The most accessible song is “Faded,” about aging punk rockers whose “glory days are at an end, and they won’t be back again.” OK, look, a few of these guys are no spring chickens. Guitarist Dr. Cain Esq. is definitely in his 30s, and singer and harmonica player “Dirty” Curtis Campbell is almost there, and drummer Sir Chadwick of Nichol is in his 40s. Perhaps these guys are trying to prove the song “Faded” wrong!

The band is rounded out by cutie-patootie Hayley “Manstomper” Thomas on guitar and vocals and edgy Greg Cherry on bass. I first saw the band at The Z Club, and it felt like wandering into CBGBs for the Ramones’ first gig. They’re definitely capturing the primal essence of early rock’n’roll, and if that appeals to you, don’t miss this show!

And finally, on Sunday, June 30, local gal made good Callie Bobsin brings her country sounds to SLO Brew (doors at 7 p.m.; 18-and-older; $8 presale or $11 at the door). Her national radio single “Back Then” from her new EP On My Way is set to be released July 8 and promoted to Music Row charting stations. She grew up on a grain and cattle ranch in the North County, performed in team roping events, but got a bug for performing when she sang the National Anthem at school sporting events. At 17, she learned guitar, and since her mom’s also a singer, she gained inspiration there as well. “Being a songwriter has brought a whole new perspective to my singing,” she said in her press bio. “It means so much more and I enjoy it so much more, knowing that they’re my songs, and that other people can relate to them like I do.” Come check out this rising country music star!

Last week I was listening to Morning Cup DJ Neal Losey of KCBX 90.1FM, and he mentioned how when the Live Oak Music Festival started 25 years ago at Biddle Park, the organizers probably had no idea it would survive and continue to thrive 25 years later, and then he mentioned the upcoming Seven Sisters Fest that’s set for Friday and Saturday, July 12 and 13, at El Chorro Regional Park & Campground, and how maybe this festival could do the very same thing, and how great it would be to say, “I went to the first one.” That sounded about right, Neal!

The motto is “Celebrating Life on the Central Coast,” and the event is hosted by Tap It Brewing Company and produced by HarvestMoon Inc. with benefactors The Infinite Music Foundation, SLO Botanical Garden, The SLO Brewers Guild, Guitars in the Classroom, and The CA Craft Brewers Association. People can buy day tickets or camp overnight, and the organizers have purposely put together a very eclectic lineup of performers: Karl Denson’s Tiny Universe, Robben Ford, Gangstagrass, Nora Jane Struthers & The Party Line, Sister Sparrow & The Dirty Birds, Honey Island Swamp Band, Poor Man’s Poison, and City Folk.

“This festival is an earthy, laidback approach to celebrating summer on the Central Coast, with amazing music from artists that are not necessarily in the mainstream. And with the craft beer tasting and the camping component, you can totally immerse yourself in the weekend,” says Sarah Mason, co-producer of HarvestMoon Inc., the same group that has produced the successful Mammoth Festival of Beers & Bluesapalooza, now in its 18th year.

Tickets are available through all Vallitix locations, online at vallitix.com, or by calling 1-888-825-5484. You can learn more at sevensistersfest.com.

Neo-soul and R&B artist EmJay is on the last leg of her three-month Central Coast tour before heading back to her home stomping grounds in the Midwest. Featuring Emily “EmJay” Jawoisz accompanied by a drummer, the duo “combines socially charged and bold lyrics with jazzy and funky music,” according to Jawoisz. “Since coming to the area three months ago, shows have included Songwriters at Play, SLO Farmers Market, Fuel Dock, Stax Wine Bar, Cayucus and Cambria Ale House, and most recently at SLO Brew opening for the Flobots. Central California has been great to us. We went from playing jam nights and open mike nights to playing some of the best venues in town in a very short time.” Their next show is at Eureka Burger on Thursday, June 27, at 5 p.m. Catch this talented chanteuse before she’s gone.

“We’re hosting an evening wine reception and performance by Caribbean Cowboy Kelly McGuire on Thursday, July 27, from 6 to 9 p.m.,” said Kyle Coots of Sculpterra Winery. “The wine reception starts at 5:30 p.m. and wood-fired pizza will be available by Fresh Fire Pizza.” McGuire is on a mini tour and lives near the Galveston Coast in Texas and sings songs of boats, islands, and life on the sea. He was voted Songwriter of the Year in the 2012 Trop Rock Music Awards and was nominated for Album of the Year for King of the Island in the 2012 Texas Music Awards. The event is $20. Call 226-8881 for more info.

Luis Oliart and his trio play the Shell Cafe on Thursday, June 27 (6:30 p.m.; all ages; free). His song “Broken Chains” has been getting play on The Krush 92.5FM. Based in L.A., the alt-soul artist plays a multitude of guitar styles, from slide to flamenco. Special guests include Antonette G, Olivia Mancini, Scott Mickelson, and Beth Wimmer.

Spectra Records recording artist Rob Larkin is returning to our area for the first time in two years to play a solo acoustic show on Thursday, June 27, at 7 p.m. in the Paso Brewing Company. He plays a homespun blend of Americana, roots rock, and soul, and has been compared to Eric Clapton, John Mayer, The Band, and Tom Petty & the Heartbreakers.

Luna Red has the unusual jazz pop stylings of Proxima Prada on Thursday, June 27, from 10 p.m. to midnight, and the gorgeous and inventive songs of Jody Mulgrew on Sunday, June 30, from 3 to 6 p.m. Find great free music and drink and food specials, all in a lovely setting.

Seattle-based Tokyo-bred Japanese all-grrl band The Akabane Vulgars on Strong Bypass are returning for the third time in less than a year to Sweet Springs Saloon on Friday, June 28 (9 p.m.; 21-and-older; $5 at the door). These girls throw down some serious rock’n’roll. They can move from Paul Anka’s schmaltzy “You Are My Destiny” to raw, bluesy punk rock in an instant. Don’t miss this tight trio!

SLO Jazz Festival kicks off its summer season with the third annual Court Street Summer Jazz, a lineup of music featuring local jazz heroes and stars of the Central Coast jazz scene. On Saturday, June 29, from noon to 3 p.m. at the Court Street Terrace, check out the Cuesta Jazz Collective.

Local cancer victim Sam Ford will be honored during a Saturday, June 29, benefit concert from 3 to 6 p.m. in Branch Street Deli in the Village of Arroyo Grande. Ford—an active, well-loved girl—died in 2010 after her third battle with cancer, but her name and spirit live on in a scholarship to The Studio of Performing Arts in Arroyo Grande. There’s no charge for admission, and the deli is donating 10 percent of all of the food and drink sales to the Remembering Sam Ford dance scholarships. Local musicians Amaris Laurette Taylor (acoustic blues), Swim Lessons (indie folk), and Nataly Lola (folk-jazz) featuring Shannon Lowrie will perform. Plus, attendees will enjoy a special performance by dancers from The Studio of Performing Arts. Remembering Sam Ford organizers will be on hand to sell Remembering Sam Ford T-shirts, tank tops, tote bags, and bracelets. In addition, raffle tickets will be available for purchase for the chance to win exciting prizes from local businesses. Come out and show your support!

It’s time for the 6th Annual Firecracker Boogie, Dr. Danger’s annual fundraiser for the Woods Humane Society. On Sunday, June 30, starting at noon in the pavilion in Biddle Park, Dr. Danger will be joined by Big Daddy’s Blues Band and young power trio Spaces Between. Expect blues, soul, and rock as well as originals from all three bands. There’s a $3 park admission fee per car, but the event is free. However, a $5 donation is requested. All donations go to Woods. In addition, there’ll be barbecue for sale, a 50/50 raffle, and a silent auction. Bring your dogs, or if you’re looking for a new canine companion, Woods will be bringing dogs ready for adoption.

The Swingin’ Doors play Sunday, June 30, from 1 to 5 p.m. at Salisbury Vineyards. The Schoolhouse Rock Concert Series will feature classic honky-tonk, country, and western swing on the Schoolhouse patio. The show is free, and wine and food will be available for purchase.

The Grover Beach Sizzlin’ Summer Concert Series and Farmers Market has a double-header concert set up for you on Sunday, June 30, in Ramona Garden Park when the SLO County Band plays from 1:30 to 3 p.m. followed by Soundhouse from 3 to 6 p.m. Hear some traditional big band sounds followed by some awesome rock’n’roll!

Coalesce Bookstore presents Inner Faces on Sunday, June 30 (2 p.m.; all ages; $10; call 772-2880). The Central Coast group draws influences from jazz, rock, classical, and bluegrass. Going strong for more than 20 years, the trio has recorded two original CDs: Beneath the Surface and Best Laid Plans. Tom Walters plays mandolin, Bruce Corelitz is on guitar, and Ken Hustad plays bass. These guys are all top-notch musicians, and they put on a great show.

Pianist Keith Saunders is the next attraction at the Famous Jazz Artist Series at the D’Anbino wine tasting room on Sunday, June 30. Saunders was for many years one of the top jazz pianists in N.Y.C, leading the N.Y.C Hard Bop Quintet. He’s just recently relocated to San Francisco. He’ll perform a solo piano recital with series co-producers Charlie and Sandi Shoemake (vibraphone and vocals) sitting in for a few selections. There’s a 4 and 7:15 p.m. show for $15 each, or see both for $20. Call 927-0567 for reservations.

Spoonfed Lightning’s Billy Estrada and Tony Kirkorian play Bon Temps Creole Café on Monday, July 1 (6:30 p.m.; all ages; free). “Billy combines the vocals of Ray Charles with the guitar of B. B. King, while throwing in some healthy doses of blues harp and slide. Tony ‘The Kid’ Kirkorian was born and raised in Fresno where he was influenced by the likes of Lynyrd Skynyrd, Led Zeppelin, and Stevie Ray Vaughan,” according to concert organizers. Savannah Philyaw and Ted Waterhouse will also perform.

Canadian singer-songwriter Elaine Ryan splits her time between Vancouver and Maui, but on Monday, July 1, she’ll also play Bon Temps Creole Café (6:30 p.m.; all ages; free), and on Wednesday, July 3, she’ll play Linnaea’s Café (7 p.m.; all ages; free). “This is my album release tour,” she said. Titled Sunsets & Twilights, her album is a thoughtful collection of pop folk with a couple upbeat rockers thrown in. ∆