Feel like protesting in front of Sam Blakeslee’s office? Take a number. In his new position as Assembly Republican leader, Blakeslee, whether he wants it or not, is becoming a direct link between an outraged public and the Capitol.

Picketers marched frequently in front of his office as legislative leaders, often called the “Big Five,” met in Sacramento to decide what to cut.

If the latest budget fix is anything like the last round in Sacramento, it will be a nearly impossible fight to get enough Republicans on board for tax hikes. In its current state, the budget will likely be balanced through massive cuts to social and welfare services.

Multiple protests were staged outside Blakeslee’s office in downtown SLO. One scheduled on June 17 was backlash against proposals to slash billions from welfare-to-work programs, home care for seniors, and public education, according to a news release. Protesters scheduled another demonstration on June 18 in the area with plans to continue marching through the Farmers’ Market.

Dozens of picketers representing caretakers and patients of the state In-Home Supportive Services program crowded together on June 16. At a glance, the protest appeared to be directed at SLO County’s legislative figure, but several people there said their anger was focused elsewhere. During the protest a driver yelled a curse out his window, referring to Gov. Arnold Schwarzenegger.

Blakeslee wasn’t available for comment. District Director Courtney Kienow said he’s been one of the strongest Republican supporters of home-based services: “Sam is working very hard on a balanced budget that will minimize impacts during these very difficult times.” 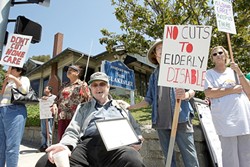 As part of his attempt to save the state’s black-hole budget, Schwarzenegger proposed to cut pay for IHSS workers from $10 to $8 per hour, protesters said. Additionally, the plan would block hundreds of thousands of patients—about 90 percent—from accessing the services.

Dale Grube, a 71-year-old Navy veteran, sat in a metal folding chair, wearing a knit sweater with a patch of the American flag crudely sewn on his left shoulder.

“I’d appreciate it if I can stay in my own apartment without having to go to a nursing home or convalescent home,” he said.

And if the home services are is cut as  severely as Grube and others worry, convalescent homes are exactly where many people will end up. Julian Havandjian has been an in-home caregiver for almost six years. He said if the state limits access to the program, that more would force move people into convalescent homes, which would cost taxpayers even more money through Medi-Cal than they pay to keep in-home services running.

“It gives [patients] quality of life and dignity instead of institutionalizing them,” he said of IHSS.

Aleida Lund has been Grube’s caretaker for about a year. She said she was upset she might take a large pay cut, but more worried about what could happen to Grube.

“Without me being there, his life wouldn’t,” she paused and made a nervous humming noise, “Maybe he would have to go to a nursing home.”

Even people who want Blakeslee’s office are protesting outside his office. Robert Cuthbert, a Democrat running for the seat Blakeslee will have to abandon due to term limits, led a short walk from the SLO County Government Center to Blakeslee’s Palm Street office on June 17 in protest of suggested budget cuts, ranging from senior home care to children’s health care.

Cuthert wants Blakeslee to increase state revenue to solve the budget: “He has access to the governor, we don’t,” Cuthbert said while standing in front of Blakeslee’s office. “And he needs to break ranks with the Republicans and create revenue.”

Colin Rigley can be reached at crigley@newtimesslo.com