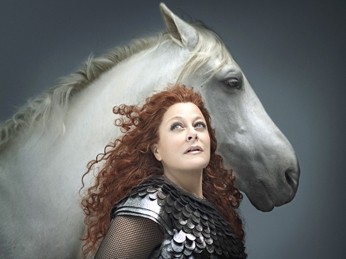 Wagner's Die Walküre is only one segment of an entire story. At a whopping 5 hours and 30 minutes long, the show is approximately twice the length of James Cameron’s Avatar, yet it remains only one installment of Wagner’s Ring Cycle. What would compel a person nowadays to sit through that? Why would the average American take time out of his or her day that could have otherwise been spent seeing several movies? The answer is simple: It’s a once-in-a-lifetime event, and a frightfully good one.

The Met: Live in HD is a series of simulcasts of the actual performance at New York’s Metropolitan Opera to venues all over the country. Given that attending the opera in person would cost anywhere from $30 to $420—and that the large, high definition screen allows one to see the action and facial expressions much better than any observer in the theater—a price of $19.95, with discounts available, is much more than fair.

What if you haven’t seen the prior installment? It doesn’t matter; you’ll understand the story. Don’t speak much German? It doesn’t matter. The show is subtitled. What if you can’t sit for that long without any breaks? Die Walküre has two intermissions to help you along the way, which is two more than you’ll get at a movie nowadays. And the production values are arguably some of the best that you’ll ever see—all the more astounding considering it’s live theater, rather than digital effects.

Bryn Terfel returns as Wotan, the lord of the gods. Deborah Voigt is Brünnhilde, and Jonas Kaufmann and Eva-Maria Westbroek star as twins Siegmund and Sieglinde.

Die Walküre is the opera from which the popular “Ride of the Valkyries” originates. (Those unsure as to whether they’ve heard the tune should bring to mind a famous Bugs Bunny short titled “What’s Opera, Doc?”—once voted the greatest cartoon of all time.)

The Met: Live in HD presents: Wagner's Die Walküre takes place at the Performing Arts Center in San Luis Obispo at 9 a.m. on May 14. Tickets cost $19.95, with discounts available for students. For tickets or more information, visit pacslo.org.