Get out of your funk: Recently released albums to help you forget about your latest apocalypse 2020 feelings

Not to be depressing, but it's hard not to be intermittently depressed. With more fires smoking California out due to a second record heat wave in less than a month, a renewed healthy fear of the great outdoors, plus COVID-19 keeping all of the fun indoor stuff shut up tight, what the hell are we supposed to distract ourselves with? 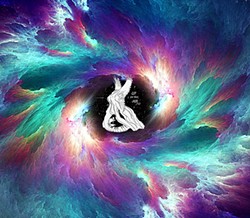 The first thing I did when I got to work this morning—Sept. 9—was cue Up in the Air's newest project, Still Out There, available for download from Bandcamp. The Santa Margarita-based seven-member band's sound is a blend of folk, pop, Dixieland, bluegrass, Latin, and worldbeat. A sweet bluegrassy guitar twang on the album's first track, "Let's Throw Time Away," temporarily pulled me out of my funk.

Up in the Air vocalist, string guitarist, and keyboardist John Beccia said they finished the album in March, pre-pandemic. But perhaps it has a thing or two to teach us now. Everything will be OK. Healing and recovery take time. But there's always time to play—to throw the time away. To gently sway with a sweet melody as you type away on a keyboard.

The band's 14th project is simultaneously a look toward where they're going and where they've been, reflecting on changes and challenges over the course of 12 tracks. Formed in the early 1980s, Beccia said they are one of the longest running bands in SLO County and they perform mostly original material. Beccia said they finished up this last project in time for a series of summer concerts that the pandemic halted.

"Being a group of musicians who do not depend on music for a livelihood, we feel we did and do not what to compete in any way with those who are making their living making music, so we have just sat on the project to this point, just giving CDs to a handful of friends and family," Beccia said.

Available on Bandcamp, Beccia said the band is entitled to 200 free downloads per month. So, if you aren't able to download it, he said just wait until the first of the month and try again.

You know what else can pull you out of a funk? An Americana album that comes with a coffee-table book and a nightlight.

Lompoc-based Americana act Angie and the Nightmares—singer-songwriter Angeline LaPointe, guitarist and backing vocalist Aaron France, and banjoist and drummer Sean "Doc" Campbell—released Girl Talk in August. You can purchase the 10-track digital album off Bandcamp for $7. An extra $3 will add a uniquely designed artist's book to that order. It unfolds like a miniature tent and comes with a small LED light to hang from the center. LaPointe told Calendar Editor Caleb Wiseblood that she chose the tent shape in part to invoke memories of camping at outdoor music festivals such as Live Oak.

"I wanted the album to come with an object. Vinyl production is out of our price range, and CDs can feel like an afterthought; so we landed on this. It literally and figuratively adds a little light to your personal space," she said. "It's like a tiny little concert venue for solo music listeners—which, let's face it, is nearly all of us these days."

That nightlight was inspired by the flashlight-lit pillow forts of La Pointe's childhood, which provides counterbalance to themes of adulthood laced throughout the album, which the group recorded with producer Jon Bartel at Northwall Studio in Atascadero. The title song, "Girl Talk," explores the complexities of growing up and "processing the harsh, beautiful realities of life and love," LaPointe said.

But out of the album's 10 songs, the third track, "Turnaround," is LaPointe's personal favorite—at least at the moment, she added.

"This song came together just right. It's atmospheric and has lots of layers," she said of the song, which features a guest saxophone solo from San Luis Obispo-based musician Laura Foxx, who LaPointe described as a "woodwind powerhouse."

Catch Michael Nowak and Orchestra Novo on Sept. 12 for How Music Tells a Story, A Concert for Families, a special never-seen-before archived video presented by the Clark Center for the Performing Arts.

Orchestra Novo's purpose is to nourish and inspire the community through the co-creation and shared experience of orchestral and chamber music that deepens connections between people, the world, and themselves. Maestro Michael Nowak crafted "a playful and imaginative constellation of musical selections," according to the Clark Center's blurb about the event.

The concert will include audience participation in "Guess the Story"; the "Hep Cat Symphony," a classic cartoon created in the 1940s Noveltoons period; and "Peter & The Wolf," of course!

Catch the show at youtube.com/user/clarkcenterperfarts or on the Clark Center's Facebook page @ClarkCenter. Donations will be split evenly between Orchestra Novo and the Clark Center.

The city of Atascadero continues its Saturday in the Park concert series remotely, and on Sept. 12, you can check out roots rocker Dulcie Taylor from 6 to 7 p.m. on KPRL 1230AM and from 6 to 7:30 p.m. on the city's Facebook page @atascaderorecreation and YouTube channel. Δ

Editor Camillia Lanham wants you to know that Glen Starkey will be back next week. Calendar Editor Caleb Wiseblood contributed to this column. Email complaints to gstarkey@newtimesslo.com.
Note: This article was edited to correct a spelling error.