Get ready to party!

Wet Zeppelin II will rock wine lovers for a great cause 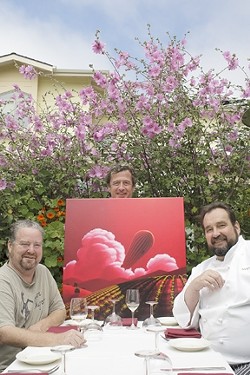 Winemaker Stillman Brown predicts his upcoming annual Wet Zeppelin wine and music event will be the wildest winery party ever held anywhere. Unlike winemakers who fear that if they admit they’re having too much fun in the business people might not take their wine seriously, Stillman—who’s definitely a maverick with a sharp wit—makes seriously good wines and combines them with heavy music. He brings in everything from rock-and-roll and reggae bands to punk and metal artists. “Last year I said to people: If you don’t like the band, wait 20 minutes,” Stillman noted, “and you’ll probably like the next one.”

It’s all for a very good cause: student scholarships for Cal Poly’s Wine and Viticulture Program. Last year, Stillman selected an inspired Cal Poly woman for the scholarship. This year, he hopes to expand the number of scholarships if he can generate enough money through Wet Zeppelin II. Stillman said students find him by referrals from their professors, among them Keith Patterson of the crop science department and John C. Peterson, Professor and Director of the Cal Poly Wine and Viticulture Program.

In Cal Poly’s newsletter The Cluster, Summer 2010, Peterson wrote: “Our very impressive students deserve the fullest experience, from vine to table, that we can offer.” The Wine and Viticulture Advisory Council is working on projects that will provide real world, state-of-the-art training and a foundation for the school’s maxim: Learn by doing. A new wine and viticulture facility is in the works, which will provide specialized laboratories, meeting rooms, and a fully functioning winery. Peterson added, “It embodies the [learn-by-doing] principle more than any other building project on campus.”

The scholarship isn’t huge, but it’s a big deal to the hardworking students who have to struggle to pay tuition. Stillman said he chose Cal Poly over Davis or Fresno’s wine programs, because it’s in the heart of wine country. Here it’s much easier for students to find internships, and jobs after they graduate. “Obviously, Cal Poly SLO is sited in a better winegrowing region than UC Davis or Fresno, the homes of the other enology and viticulture programs in California,” Stillman explained. “What many people aren’t aware of is that there are more students enrolled in the program here [in Cal Poly] than there are in Fresno or Davis. That’s another reason to help.”

“Stillman is a unique person. If you’re getting into the wine business, you’ve got to start out with him,” Peterson laughed. “He’s just a grown-up kid who’s having as much fun as anybody at Wet Zeppelin. He’s very generous with his wine and his money, and the students think the world of him.” All of the events have a suggested donation price per person, but those who make a substantial donation will get the V.I.P. treatment for their generosity.

On Wednesday night, the party will get a jumpstart on the patio at The Kilt in SLO. Red Zeppelin wines will be poured, and you can order cold drafts and food from The Kilt’s excellent menu until 10 p.m. The Red Skunk Jipzees, and Dario Rosa will perform. On Thursday, the party moves to the Sweet Springs Saloon in Los Osos for live music, the dancing cage, and wines. To get in each night, they’re asking for a $10 donation per person. The five-day event always includes Stillman’s Red Zeppelin wines and those donated by friends, this year they include winemakers Amy Butler and Steve Glossner. Another close friend of Stillman’s, Elvis Kokopelli, will read his poetry each of the five nights.

The winemaker’s dinner takes place Friday night in Cayucos. Wet Zeppelin II offers dinner with wine and live music at a destination restaurant, the highly-esteemed Hoppe’s Wine Garden Bistro. There’ll be a generous buffet by chef Wilhelm “Bill” Hoppe. The chef has created a special dish Stillman calls “uber-lone” provided by the Abalone Farm in Cayucos. It will be served in a bubbling black cauldron in keeping with this year’s theme, “paint it black,” because it happens on Friday the 13th. The buffet menu includes: green salad, potatoes, vegetables, shrimp curry, and beef filet. Stillman will be pouring some new and older vintages, and a Ranchero Cellars Blanc de Noir made by Butler and Glossner. The evening concert features the Red Skunk Jipzee Swing Band, and Dario Rosa. This dinner requires a donation of $95 per person for the buffet, wines, and the entertainment.

On Saturday, they’re back to Sweet Springs Saloon for the big concert featuring the Bezerks, Meth Leppard, Dario Rosa, and Dread Zeppelin, plus several yet unnamed performances. This concert requires a $30 donation per person. Feel free to break out your best costume, be it Elvis, surf, Halloween, animal prints, or leather. “The great thing is that there’s so much going on,” Stillman quipped, “there’s no way you’ll see everything during these events. Of course, the dancing cage will be featured most nights.” On Sunday, Stillman, who’s also known as Swilly Idle, said there will be a Secret Sayonara Soiree at 6 p.m. With a gut laugh, Stillman added: “Some of the Cal Poly students are under 21, so I’ve basically created a scholarship for under-age winemakers.”

The events take place in SLO, Los Osos, and Cayucos, Wednesday through Sunday, August 11 to 15. You can become a fan on Facebook: search for Wet Zeppelin II. To make early donations, volunteer to help set-up, or to get details, see wetzeppelin.com or call Stillman Brown at 550-6492. “I throw complex parties for the same reason I like complex wines,” Stillman concluded. “If one or two people don’t tell me ‘That’s the best party I have ever attended in my life,’ I’m disappointed.”