It’s good to know our kids are being taught about art by people who know what’s up. Like Cal Poly sculpture professor Diana Puntar, whose selections from her palindromically* named series LIVEDLIVEEVILDEVIL are deliciously difficult to describe. They’re like tree trunks, if trees were made by Swedish furniture designers in the future.

Puntar’s shiny, seductively curved pieces, alongside the work of several art educators, is on display at the Cal Poly University Art Gallery in a current exhibit of works by the college’s art and design faculty. The exhibit showcases a broad array of talent in multiple disciplines, resulting in an engaging and occasionally cohesive experience.

Michael Barton Miller’s wonderful Micromessy, which greets the eye upon entry, appears to be part of the artist’s continuing exploration of communication and outdated technology: Tangled microphones of various degrees of obsolescence, rendered in watercolor and graphite on architectural vellum, seem to memorialize past means of communication. But then again, maybe not, because who would want to untangle that pile?

The piece, Miller writes, “examines psychological pathways between human beings” and “raises questions about the lost desires of technological devices caught in a spider web filled with wandering ghosts.” 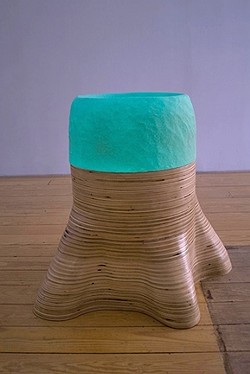 Eric Johnson’s photography series The Myth of Choice depicts what appears to be a totem pole or other ancient, symbolic structure, but proves upon closer inspection to be stacks of painted Styrofoam. The disposable totem appears in various environments in Forest, Alcove, and Bridge. The inspiration for the series, the artist explains, is the idea that everything is connected at an energetic level, “even the ubiquitous Styrofoam packaging that protects computers,” he writes.

Mary Laporte’s A Fishing Story may be one of the most emotionally affecting. It’s a tale told, storybook-style, of a murder the artist’s father witnessed at the age of nine. The pages, displayed individually in a neat little row, call to mind children’s author/illustrator Beatrix Potter, with their soft-edged illustrations and simple sentences. (“Lawrence was fishing in the usual spot…when he heard a commotion.”) Only the last page isn’t a page at all, but a Colt .41 revolver, its hard-edged realness shattering the innocence of the story.

If that doesn’t bring you to tears, Tera Galanti’s Beautiful Losers series just might. Galanti volunteers at Morro Bay’s Pacific Wildlife Care, an organization that rehabilitates orphaned and injured animals and releases them back into the wild. Ever the animal lover, the artist began doing a series of illustrations of the frozen mice the center feeds to wild birds in its care, in an effort to bestow some dignity on the creatures who had unwittingly given up their lives.

The drawings are sweet and sad, the tiny creatures curled up into a ball or appearing to stand on their hind legs, mouths slightly open as if releasing their last breath. One drawing depicts two of them together, heads almost touching, as if they were two sweethearts gazing up at the clouds. “Tiny sacrifices, resisting inconsequentiality,” Galanti calls them.

Photography professor Sky Bergman’s contribution is a series of short videos from around the world—set, fittingly, to Modest Mussorgsky’s Pictures at an Exhibition, performed by the Cal Poly Symphony. (The pairing was part of a recent concert of music inspired by and interpreted through the visual arts.)

Bergman’s visions of the earth bring to mind cinematographer Ron Fricke’s wordless documentary Samsara: moments of human interaction from around the world are contrasted with shots of ancient ruins and natural wonders, as well as time-lapse effects that make you believe you can feel the Earth spinning. Burmese children leap from boat to boat, while classic cars race around a street corner in what could only be Cuba. Desolate, lonely-looking rock formations are rendered all the more majestic by the accompanying classical score.

Daniel Dove’s large-scale painting Trixter, which recently appeared in a solo show at the San Luis Obispo Museum of Art, depicts a modern, ambitious-looking sculpture before a dilapidated building. The piece, named for the tagger whose name is scrawled across the (once impressive, now hulkingly ugly) structure, dichotomizes the optimism that led to the building’s construction with the sad reality that led to its eventual decay, in what might serve as an allegory for the rise and fall of human civilization. (Too far?)

The exhibit is impressive in the scope of its talent, the entirety of which I can’t possibly cover. (I’ll have to let you explore Charmaine Martinez’s sweet-smelling typeface and Deborah Denker’s photographic version of color field paintings on your own.) The show includes design work—architectural plans, logos, and so forth—that’s generally considered out of place in an art gallery, but which nonetheless make the world a more aesthetically pleasing place. Together, these pieces provide a well-rounded look at what the art and design department has to offer.

*not actually a word