Get that Picasso off your wall

Any exhibit is an invitation to view the world through another set of eyes, or at least an attempt to put new color into a world that has become too complacent. In this capacity, West End Espresso is currently home to a perspective new to San Luis Obispo, that belonging to Neal Breton a recent transplant from Los Angeles. In his shockingly untitled debut show—shocking because he takes such manifest pleasure in titling his individual works—Breton showcases 14 paintings and 9 drawings, mostly acrylic on canvas, as well as screen print, pencil, ink, marker and color pencil on paper, and spray paint, an explosion of pop descontruction-ish colors and shapes.

It may be just as well that he didn’t title his first solo SLO exhibition, given that the pieces on display are those he simply happened to have on hand, dating back nearly five years in one case. In a strange way Breton’s entire career is a confluence of passivity and passion. He studied design at Pasadena City College at his mother’s insistence: “She practically picked my classes for me,” he only half-joked. But he didn’t necessarily conform with the other design majors, only discovering his niche after he enrolled in a mandatory painting class.

“The painting people were like a loose liberal bunch of freaks that I finally identified with,” he said happily. Perhaps equally meaningful he found a painting instructor who encouraged him, and artistic predecessors—Andy Warhol and Roy Lichtenstein among them—who inspired him. So Breton did what anybody who had discovered their passion would do: He quit college,

“My teacher told me I could paint and by then I had my first show at a little coffee house. I figured that I didn’t need a slip of paper to tell me that I could paint,” he explained.

Working as an artist in Los Angeles, there were plenty of venues where Breton could display his work but he eventually tired of the innumerable artistic clones—devotees to a particular artist, whose own work would become indistinguishable from that of their idol. So, last December he moved to San Luis Obispo, drawn by the area’s natural beauty and lack of cutthroat lifestyle. The transition was initially a little awkward.

“At first I found it kind of hard to feel centered because when you live in L.A. it’s a war,” he said. “You’re fighting to live. You’re fighting to eat. Everything’s a battle. When I got here I wasn’t sure whether I wanted to set this place on fire or blend in.”

And the truth is he still isn’t sure. When he first arrived, he made the art venue rounds, bringing his portfolio to galleries and cafes, which is how he scored his current exhibit at West End. He doesn’t want to become categorized as a coffee shop artist, but abhors the content that tends to dominate many of the more traditional galleries. Wine glasses, landscapes, and horses probably won’t be making their way onto his canvases any time soon, unless, of course, he thinks of a way to invert them in a particular piece. 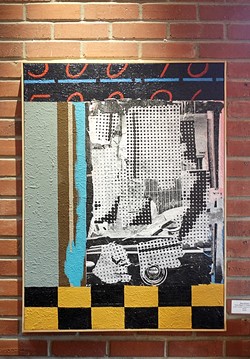 One space where he seems to have found a home is Jeff Claassen’s Gallery on Morro Street, which he praises for its ability to tap into the working-class aesthetic, as well as the fact that the gallery seems to have become a haven for artists whose work doesn’t fall within the boundaries of convention. Breton categorizes his own art as blue collar, in part because his content is generated by everyday occurrences and objects—fruit, slackers, peanut butter, and bunnies, among them. But his renderings of fruit aren’t your classical still life depictions. In fact, Fruit, Three Pieces, is frankly sarcastic, Breton’s answer to the thousands upon thousands of faithful depictions of produce created by amateur and professional artists alike. Much of his humor is also derived from titles, some of which bear absolutely no relation to the subject on the canvas.

“My paintings are a hard fought meal,” he said. “There’s always a part of every painting that is a pain in the ass. I have to paint this color and paint it seven times to get it just right. As a treat I let myself have some dessert. Titling something really strange, sometimes they’re two completely different ideas and I smack them together.” Examples of these designations include One Night in Hollywood (Was One Night Too Many), Life as a Painted-Over Billboard, Panda Youth, and Congressdog. His most recent favorite, not featured in the current show, is I’ll Stop Giving My Opinion About People When I Start Being Wrong About Them.

Besides painting relatable moods and concepts, Breton keeps his compositions working class by making them affordable to just about everyone. His paintings range in size from 5 by 5 inches to 48 by 36 inches, and in price from $30 to $350. In an easily overlooked corner of the cafe, at the uppermost region of shelves dominated by coffee canisters, is a row of Breton’s drawings as well—pencil, ink, and spray paint, mostly on paper. Here the prices range from $15 to $55. The goal, beyond fulfilling the compulsion to create, is to enable everyone to purchase original art. Purchasing a representation of a Picasso or Monet from a poster store is dated, as far as Breton is concerned.

Of course, talking people down from the poster aisle and away from the plein air exhibit requires technical skill. Breton is a perfectionist, whatever his subject, and he expects his peers to exhibit the same sense of responsibility for what they produce.

“If this is where we have to take the fight then this is it,” he gestured to the cafe, where his work holds court through the end of October. “This is our opportunity. If you paint a good painting then somebody will buy it and it doesn’t have to be of the ocean. It’s our responsibility to use a craft that is tight enough to make it into these big galleries.”

Arts Editor Ashley Schwellenbach has spent her share of one too many nights in Hollywood. Blame it on UCLA, and Greyhound, at aschwellenbach@newtimesslo.com.