Monday, Aug. 16 will mark the 33rd anniversary of Elvis’s death (moment of silence, please!). But The King’s ghost lives on in the person of Tortelvis, frontman to the greatest band on earth, Dread Zeppelin, an electrifying live act that presents Led Zeppelin cover songs done reggae style by an Elvis impersonator. Yes, let that soak in a little.

I mention this because Dread Zeppelin is coming to Wet Zeppelin, a concert so awesome that after last year’s event, the Cayucos Vets Hall banned the show for life. For life! It’s an event too big for one day only, an experience too colossal to be processed in one sitting. Attendees will puzzle over what they saw, heard, and lived through for years to come. Some attendees may take up poetry, others may become monastic philosophers, and others degenerate gamblers and drunks.

Here’s the rundown: On Wednesday, Aug. 11, the fun kicks off at The Kilt in SLO Town with an 8 p.m. show featuring Dario Rosa (formerly of Cabaret Diosa) and the Red Skunk Jipzees. Rosa sounds like “Johnny Cash partying with Brian Jones.” Red Skunk sounds like Django Reinhardt embodied in the spirit of a 20-year-old redheaded spitfire. $10 is all it takes.

On Friday, Aug. 13, meet at 8 p.m. in the Full Moon Wine Bar in Cayucos for a drink and then at 9 head to Hoppe’s Bistro for a $95 dinner that includes wine and performances by Dario Rosa and Red Skunk Jipzees.

Return to Sweet Springs on Saturday, Aug. 14 for the really big show with The Berzerks (punker than Devo!), Meth Leopard (the most dangerous band in the county), Dario Rosa, Elvis Died For Your Sins (a nasty surprise), and the infamous Dread Zeppelin ($30).

“There will be a dancing cage on at least two nights,” said Swilly, who recommended advance purchase for Hoppe’s and Dread Zeppelin by calling 550-6492.

There will also be a secret sayonara soiree at 6 p.m. on Sunday, Aug. 15. “Sunday’s event will be announced to the survivors of Saturday night,” warned Swilly, who also suggests that all attendees wear “entertaining attire.”

This week Downtown Brew’s cooked up three killer shows starting with garage alt-rockers Monster Eats the Pilot playing an album release party this Thursday, Aug. 5 (7:30 p.m.; all ages; $7 presale or $9 at the door). Scarlet Grey opens. The local trio is fronted by French-born singer-songwriter Richard Shackelford, and the band’s hooky sound has already garnered air time on indie radio stations in the UK.

One Monday, Aug. 9, check out funk, rock, and roots act Delta Nove (7:30 p.m.; 21-and-older; $7 presale or $9 at the door). The Southeast’s favorite funk institution, Yo Mama’s Big Fat Booty Band, opens the show. Long Beach-based Delta Nove plays world funk, “we’re talking deep and heavy funk grooves, a thunderous array of percussion, catchy songs, and a celebration of life like you’re at Brazilian Carnival and New Orleans Mardi Gras all at the same time,” says the band. The Booty Band is a six-piece funk monster that exerts an undeniable energy: “Using funk as a foundation, the Booty Band weaves elements of hip-hop, reggae, ska, and Latin soul into the mix, creating a musical entity that is entirely their own,” they say.

Next Thursday, Aug. 12, local act PK, whose record Into the Roaring is a finalist for Album of the Year in the New Times Music Awards, hits the club (7:30 p.m.; all ages; $8 presale or $10 at the door). Picture Atlantic opens the show. 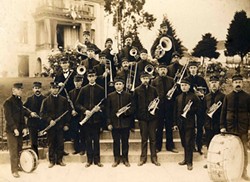 The SLO County Band is so old that when its members turn their horns upside down, mummified pilgrims fall out. In fact, it’s one of the longest continuously running bands in the United States at 136 years old this year.

At 1 p.m. this Sunday, Aug. 8, The SLO County Band and the History Center of San Luis Obispo County are teaming up to present a historical concert at the Dallidet Abode and Gardens. Enjoy the sounds of the band as well as the Coastal Brass Quintet while learning about local history as the musical performances are interspersed with historical facts and stories that pertain to the music and artifacts on display such as historical sheet music, vintage band uniforms, local wine history, and the permanent exhibits within the Dallidet.

Sheet music from the late-1800s to the mid-1900s will be displayed, some of which was used by such prominent original local families as the Danas and the Dallidets. Several SLO County Band uniforms from as early as 1906 will also be on display along with photos and musical paraphernalia. 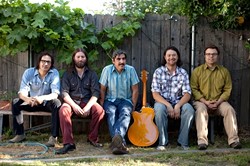 On Thursday, Aug. 5, Clubhouse regular Anthony Roselli will be joined by local blues harmonica player Joey Five & Dimes and his Moneymakers. Expect a mix of classic Willie Dixon and Little Walter tunes, as well as originals. Roselli starts at 6:30 and the Moneymakers will go on at 8. This show is free!

Old Californio returns to town for the third time this Thursday, Aug. 5 when they play a 9 p.m. show at Frog and Peach in support of their most recent CD, Westering Again, which features the band’s harmony-laden mountain sound. If you’ve seen them before, expect some new material as their upcoming album, Sundrunk Angels, is due out later this year. According to the band, they “blend a gritty soup of bucolic rock’n’roll influenced as much by bands such as the Grateful Dead, The Who, and Crazy Horse as the ungovernable San Gabriel Mountains themselves.”

One of the Central Coast’s most talented and versatile bands, Oasis, plays this Friday, Aug. 6 from 5:30 to 7:30 p.m. at Paso’s City Park during a free, all ages show. This energetic seven-piece outfit can play Big Band standard, swing music, and rock’n’roll with equal aplomb.

“Imagine if Johnny Cash, Bob Marley, and Joan of Arc were one woman. Now, imagine that woman gathering a band of eclectic musicians on a crusade to expand the bounds of country and folk music,” said Juli Crockett. “Described as ‘Cosmic Square Dance’ and ‘Hillbilly Jazz,’ Juli Crockett and The Evangenitals are opening people’s minds and ears to a new style of Southern music. Though based in the roots of country, the band incorporates a wide variety of influences, instrumentation, and styles. The result is a genre hopping bull ride that has music fans and critics buzzing in Los Angeles and beyond.” It’s her first time in the area, so check out Crockett’s alt-country vibe this Friday, Aug. 6 at 8 p.m. in the Clubhouse. The cover’s $5.

Red Barn Community Music Series continues this Saturday, Aug. 7 with an evening of traditional bluegrass to improvisational blues by Dorian Michael (guitar) and Kenny Blackwell (mandolin) at the South Bay Community Park in Los Osos at 7 p.m. (pot luck supper at 6). A $10 donation is requested at the door. Both these players are wizards on the strings. Said Dorian, “Some music makes you feel deeply, some music makes you think, and some tunes are played just for the sheer fun of it. We like to try to get to all those places in the space of a concert.” 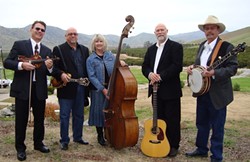 Looking for some cutting edge bluegrass? Then check out Highway 65. United in December 2009, the members of Highway 65—Ron Hibdon (guitar and vocals), Kelvin Gregory (mandolin and vocals), Roy Nelson (banjo), Dee Gregory (bass), and Ernie Lewis (fiddle, dobro, and vocals)—share over 185 years of musical experience. See them Saturday, Aug. 7, at 7:30 p.m. in the SLO Down Pub.

Doug and Telisha Williams play the Steynberg Gallery this Saturday, Aug. 7, touring in support of their sophomore release, Ghost of the Knoxville Girl, which just spent 15 weeks in the Americana Music Association Radio Top 40 chart. Hailing from Martinsville, Virginia, “where boarded up factories stand as monuments to how fast the world can change, they write and sing songs about dying small towns, and they know what they’re talking about,” says their bio. “The unemployment rate where they live is 20.2 percent. When you hear them sing songs about a couple of hard luck kids who made some bad decisions and wound up in jail, you’ve got to remember that Doug & Telisha are still good friends with those kids’ family.” See them at 8 p.m.

Ready to witness another donkey show? Then be at Z-Club this Saturday, Aug. 7 at 9 p.m. “We’re having our last show for a while and it’s an ‘underwear party, intending ladies to be in unmentionables, men in anything from bathrobes to Speedos (or burlap sacks, barrels with suspenders etc.),” said Stray Donkey’s Josh Feldman.  “Anyways, should be fun, so come experience a circus of near-naked musical debauchery.” Trouble Hoof is also on the bill. The cover is $3 … unless you’re a lady in underwear, in which case you get in free.

Sundays on the Sand at the Avila Beach Golf Resort continues this Sunday, Aug. 8 with a 1 p.m., free show featuring ‘60s pop and rock band Unfinished Business. Dig your toes into the sand and digs the sounds of some sweet rock’n’roll.

NYC drummer and composer Matt Slocum heads up the next Famous Jazz Artist Series concert at the Hamlet this Sunday, Aug. 8 with pianist Bill Cunliffe and bassist Derek Oles. Slocum has been featured on more than 20 albums and film scores and was recently awarded a Meet The Composer Foundation grant for the music on Portraits. Series co-producers Charlie and Sandi Shoemake (vibraphone and vocals) will also be on hand. There’s a 4 p.m. show for $15, a 7:15 p.m. show for $12, or see both for $20. Call 927-0567 for reservations.

Nashville singer-songwriter Brent Moyer is the featured performer of Steve Key’s Songwriter Showcase at the Steynberg Gallery this Tuesday, Aug. 10. “I’m currently performing in the Johnny Cash musical, Ring of Fire, down in Fullerton this month,” said Moyer. “I was with the original Broadway cast also.” The show starts at 6:30 p.m. and features as many as eight other performers.

This Tuesday, Aug. 10, you’ll see the kids are all right when Eyris plays the Clubhouse during Casey McDonald’s songwriters’ showcase. The group features Daniel Medeiros (guitar, age 15), Andrew Rubin (guitar and keyboard, age 15), Noah Colton (bass and vocals, age 17), and Jordan Medeiros (percussion, age 11). The group is influenced by ‘60s through ‘80s rock and such acts as Led Zeppelin, The Rolling Stones, Van Halen, and more. “Currently, we’re writing and recording original songs and also playing gigs. Recently, we played at the Clark Center ‘Search for the Stars’ talent competition, where we won the Audience Choice Award and came in third place,” said the band. The show starts at 6:30 p.m. and will include other singer-songwriters.

An up-and-comer in Portland’s indie folk scene, David Dyas is making his way across the country to his hometown of Mobile, Alabama in support of his 2010 release Stag, with a stop at Linnaea’s Café on Wednesday, Aug. 11 at 6 p.m. He last hit the road as Josh Kelley’s guitar-wielding sideman, opening for Rod Stewart. He’s also hired out his talents as sideman for the likes of The Motels, Patrick Park, and many others. Check out his “Southern inspired, lyrically driven indie-folk, featuring the deep-fried guitar playing that is distinctly Dyas.”