Get your reggae on with some of the greats

When I got my first cellphone at the age of 23, it was a flip phone. You could record sound with it and then set it to be the phone's ringtone. Very techy! My first ringtone ever? "Steppin' Out" off Steel Pulse's Earth Crisis album. Very hippy!

Well, I was in Santa Cruz, so don't judge. I had a friend who did plenty of that! He would make fun of me every time my phone rang because it was a song released in 1984—and it was reggae. Who doesn't like reggae? My favorite song from that album was "Roller Skates." 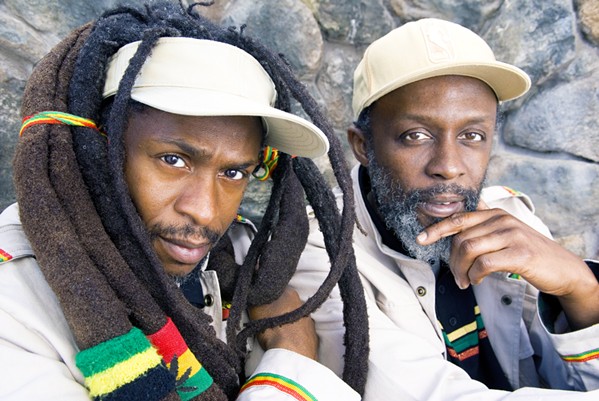 "Up comes this guy in his flashy car/ In his mouth stuck a big cigar/ Needed my help said he lost his way/ I never heard a word he said/ To find some street, said he wanted instructions/ So I turned down the music/ To point out directions, guess what?/ Guy jumped on me messed up my clothes/ Smashed and grabbed my radio/ Calling all detectives/ A criminal at large smoking/ A big fat cigar in a flashy car/ And thin him some superstar.

I totally agree. Life without music would suck.

The British reggae act is considered one of the best to come off the island and was the first non-Jamaican act to win the Grammy Award for Best Reggae Album. Steel Pulse has been bringing music to life since 1978 and has plans to release their 12th studio album in May. Called Mass Manipulation, it reflects four decades committed to bettering mankind through music, according to a post on the band's Facebook page.

"A manipulation of our minds has been influenced by a New World Order currently dominating humankind," the post states. "Steel Pulse reappears at a fated moment, armed with compassion, encouraging all people to reject false ideals, set higher goals, and demand more from themselves to further this unification."

In other reggae news, you can also bounce and boogie in unity with roots reggae, rude reggae, and dub acts Max Romeo and Dubtonic Kru at The Siren on Thursday, March 28 (7 p.m.; 21-and-older; $22 presale at Boo Boo's and ticketfly.com; $25 at the door).

A provocative lyricist, Romeo gave the reggae world songs like "Chase the Devil" and "Wet Dream"—incidentally, this song's lyrics were so naughty that it was banned on the radio and still reached No. 10 on the U.K. charts in 1969. After more than 50 years on the road, Romeo rarely tours the U.S. But he's here and on the West Coast! He cruises through Morro Bay on his way from LA to Santa Cruz. Resination opens.

If you hear the wing-ding-ding of a hundred two-stroke engines, you'll know you're in the right place for this year's annual Push-Start Scooter Club's Rides of March scooter rally events, which are open to the public.

Things kick off on Friday, March 29, with a 6 p.m. cocktail hour-and-a-half at Madonna Inn, followed by a show at Frog and Peach featuring pop punk by Hayley & The Crushers, Bay Area garage rockers The Outta Sorts, and Bakersfield's '60s-style reggae act The Capsouls (8:30 p.m.; 21-and-older; free). DJs Night Owl and Mod Scientist will spin vintage vinyl into the night.

"Rides of March turns 30 this year and so is Giuseppe's restaurant," said DJ Curtis Campbell, one half of the DJ team The Ideals. "Come celebrate with us at Ballo Mania (dance craze in Italiano). Enjoy an evening of dancing and spirits as we spin vintage vinyl of '60s soul, garage, R&B, international, and more! Formal or semi-formal dress is encouraged but not required."

Should be a blast!

Tribute to the greats

Roy Orbison Returns and The Big O Band hit the Fremont on Saturday, March 30 (8 p.m.; $42 to $52). Who knew a tribute band could cost so much to see? Well, Willie Ray is that good, and you're not just going to see a band do a bunch of cover songs.

One karaoke performance changed his life. Ray belted out "Oh Pretty Woman" and received thunderous applause. That night morphed into a regionally touring musical group that pays tribute to all things Roy.

Roy Orbison Returns puts on a musical theater re-creation of Roy Orbison's 1980s concert era years, complete with costumes, lighting, and staging. The show is 90 minutes with songs that span the 35-year career of Roy Orbison, from his earliest rockabilly days through doo-wop and into the MTV era. 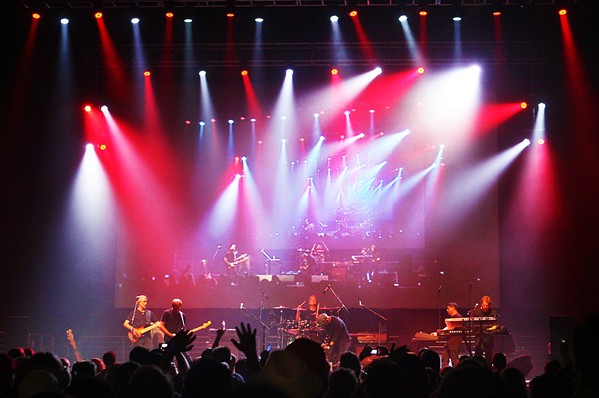 And if you're looking for a different kind of tribute band, we've got you covered. Which One's Pink? A Tribute to Pink Floyd plays the SLO Brew Rock Event Center on Saturday, March 30 (7 p.m.; 18-and-older; $20 at Boo Boo's; slobrew.com).

The Los Angeles-based nine-member group recently released a two-CD set A Fair Forgery of Pink Floyd, featuring 29 LA-area musicians and 30 tracks. Are they the greatest tribute band to Pink Floyd ever? All Access magazine thought so. But really, if you're into Pink, there's only one way to find out.

Tim Bluhn (The Mother Hips) plays the Siren on Saturday, March 30 (8 p.m.; 21-and-older; $15 presale at Boo Boo's or ticketfly.com, or $20 at the door) with The Mark Adams Band opening. As the primary guitarist and singer for The Mother Hips, Bluhm's been rocking rootsy tunes on Central Coast stages for a while now. In that time, he's released a slew of his own solo and collaborative projects, toured with Nicki Bluhm and The Gramblers, teamed up with The Grateful Dead's Mickey Hart and Bill Kreutzmann, opened up Mission Bells Studio, and started a music festival in Big Sur called Hipnic.

Bluhn cut a new record of his own at the Cash Cabin in Nashville after a speed-flying (like paragliding, but faster and more dangerous) accident landed him in the hospital. With Dave Schools of Widespread Panic in the producer's chair and a group of music veterans, the album Sorta Survivin' will be released soon.

Get funky at The Siren with Niki J. Crawford and Prussia on Friday, March 29 (7:30 p.m.; 21-and-over; $13 to $15, at Boo Boo Records or ticketfly.com). Crawford brings the heat with a "high energy soul get down." From Springhill, Lousiana, Crawford's melodic voice will get you grooving with poignant lyrics from her roots. Prussia's a modern funk group full of diversity and ambition. Their influences range from early rhythm and blues to current pop.

Black Valentine swoops into The Pour House in Paso Robles on Friday, March 29, to shower your ears with three sets of heavy metal and hard rock originals and remakes (8 p.m.; 21-and-over).

Two-man rock group Cloudship finds their way from Fresno into Sweet Springs Saloon on Friday, March 29, and the Frog and Peach on Saturday and Sunday, March 30 and 31. The duo emotes a blend of indie pop, blues, and soul.

Corey's Rolling Figs Jazz Orchestra from Los Angeles and the Cabrillo High School Jazz Band from Vandenberg Village will be playing "Hot Swingin' Jazz" at the Basin Street Regulars Sunday afternoon concert at 1 p.m. at the Pismo Beach Veterans Memorial Building, 780 Bello Street, on Sunday, March 31 ($5 for members, $10 for nonmembers). A jam session starts at 11 a.m. (bring your instrument and join in). The Basin Street Regulars is a 501c3 organization, dedicated to the performance and preservation of traditional "Hot Swingin' Jazz." Funds from this event support jazz camp scholarships for area teens and young adults.

Corey Gemme's nine-piece 1930-ish sounding ensemble will perform original songs composed and arranged by Gemme. The Rolling Figs includes members of Corey's Dixiebop Quartet, which performs all the favorites from the '20s to the '40s with a little bebop thrown in for good measure. The Cabrillo High School Jazz Band, led by Garson Olivieri, will be the intermission band at the Sunday session. Olivieri was recently selected as the 2018 Santa Barbara Bowl performing arts teacher of the year for Santa Barbara County. It's his seventh year at the high school and the fifth time that the high school band will perform for a Basin Street Regulars Sunday session.

Editor Camillia Lanham filled in for Senior Staff Writer Glen Starkey this week. You can keep up with the real Starkey via Twitter at twitter.com/glenstarkey, friend him at facebook.com/glenstarkey, or contact him at gstarkey@newtimesslo.com.