Getting by: Helping the Central Coast's working poor survive

Between the holiday good will and cold weather, winter is a time when the plight of the homeless population is on our collective consciousness—even in sunny San Luis Obispo. As the rainfall increases, warming shelters spring up across SLO County for the season. But inside apartments and houses across the Central Coast, a different kind of hardship can be found. From a lack of head-of-household jobs and insufficient affordable housing to roadblocks to medical care, barriers to financially stability abound. New Times sat down with two Central Coast volunteer organizations trying to help the often-overlooked working poor.

Sharon O’Leary spent a lot of her working life outside, from being a maintenance supply worker for Pacific Telephone to painting signs for Payless Shoes. And she saw things she might not have at an office job, like people waiting in line for a food bank or a man living in his car.

“You see people out on the streets, the nature of day-to-day life outside of our homes and offices,” O’Leary said. “You become sensitive to it. And you can’t not do anything.” 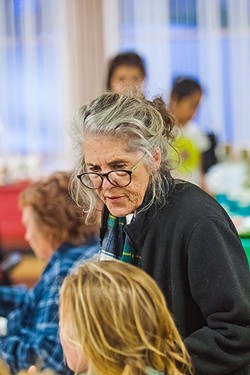 At 71 years old, O’Leary has been retired for about 15 years, but those experiences stuck with her, so much so that when the city of Morro Bay wanted to open an office with the sole purpose of helping people in need connect to programs like food banks, affordable housing, social services, and more, O’Leary was handed the task of running it in 2014.

The idea for the Community Resource Connections office was simple enough: get all the current information on homeless shelters, utilities discounts, low cost medical care, and even free legal help on one piece of paper that could be handed out to whoever needed it. In a sleepy beach town of around 10,400 people, O’Leary said that about 75 percent of the population is between the ages of 45 and 59. This is the age range of the people O’Leary sees the most in her office. They typically have a place to live, but are underpaid and not yet old enough to receive retirement benefits. In Morro Bay, where O’Leary says the average wage is lower than the national average, many face tough choices on where to spend their limited income. O’Leary estimates that anywhere between a quarter and a third of the population are at or below the poverty level.

“We don’t have head-of-household jobs out here,” she said. “We have boutique jobs. But between 45 to 59 should be the peak of people’s working career. We have a situation out here.”

O’Leary’s job is strictly a volunteer position; she takes no salary. About 12 others work with her to help connect people to services. The city pays for the rent and electricity in a small room in the Morro Bay Chamber of Commerce building, where clients can come in to meet with a volunteer. A few donated desks and chairs, a computer, and a printer fill the tiny space where around eight to 10 phone calls come in a day and two to four clients drop by. Those figures triple in the summer, when Morro Bay sees a spike in the number of homeless people in the area, most of whom are on their way to the gypsy camps in Big Sur. On a Monday in December, she paused  to warmly greet a visitor.

Bonnie Bracken of Morro Bay first met O’Leary while waiting in line at the food bank and came to the resource office for help when her son and his kids moved in with her for a time. Her income of $12.50 an hour couldn’t stretch to provide for a family of four. Now, she refers others to O’Leary.

“It was just the most loving thing going on in this whole territory, in my opinion, because there is so much need,” Bracken said.

According to O’Leary, across California, only one other city, Eureka, offers a similar service essentially through city government like Morro Bay does. The way Morro Bay Mayor Jamie Irons sees things, it’s the right thing to do. 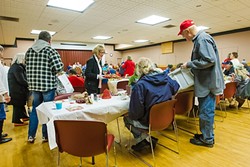 “There are folks in our community that are deeply proud and just getting by,” Irons said. “They’re making choices on things like groceries over rent. These things happen more than we know.”

O’Leary makes it her practice to go where the people are, rather than waiting in her office for them to find her. She can be found at the weekly Monday night community dinner put on by the Estero Bay Alliance for Care, at the food bank lines, and at any of the city’s 20 homeless camps stopping to say, “How are you? Do you have a copy of the most recent resource list?”

The week of Christmas, the Morro Bay Vets Hall was decorated with shiny red tinsel and wreaths for a special community dinner of tri-tip, potatoes, salad, and dessert. O’Leary stopped to check in with a man who excitedly told her he has Obamacare coverage now. She smiled broadly at the news. She doled out a kind word here, an encouraging squeeze of the shoulder there to everyone she encountered, and people perked up as she moved along.

“It’s not a tentative effort anymore,” O’Leary said. “It’s a proper effort. You get people to the table, you sort things out, and there’s an action that follows. That is everything to me.”

After rent and utilities are paid, Elva Cardona has just $150 left to pay for a month’s worth of everything from groceries to gas.

Several years ago the 66-year-old Guadalupe resident was out of work after a career as a caregiver—helping and lifting heavier, elderly people—left her injured and disabled. Her income from Social Security is limited, to say the least. When a friend told her that a local group, the Catholic Worker, gives out free food and groceries on Tuesdays, she decided to look into it. 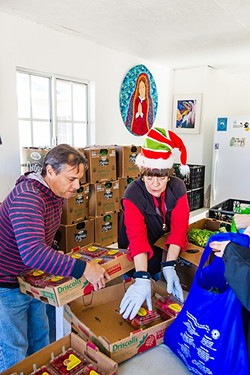 “The people there don’t look down on you,” Cardona said. “It helped me tremendously. I have a little extra money now to maybe get underwear or a better pair of shoes. I’m grateful for that program.”

Cardona supplements her income with food from the Catholic Worker’s program and she gives back to the community as a volunteer there, handing out food to others in need.

“It gives me something to do,” she said.

Nestled on a residential street in Guadalupe is what appears to be just another small house; look too quick and you just might miss it. The only thing that sets it apart is a white pole in the front yard (and another in the back) that greets visitors with the words “May peace prevail on Earth” printed in languages including Spanish, English, and Japanese. Inside is everything from a house to a food bank (with a playground for kids) and even a medical clinic. For Jorge Manly-Gil, it’s been his home and place of work for the better part of a decade. He’s worked with the Catholic Worker in communities like Los Angeles, San Diego, and Mexico for most of his adult life. He came to Guadalupe for a six-month stint about eight years ago and never left.

“I just loved the community and the work, and I just stayed,” Manly-Gil said. 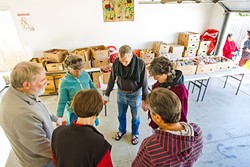 While there are Catholic Worker groups across the country and abroad, each one operates independently and seeks to serve marginalized people in those specific communities. In Guadalupe, the group has roots going back 20 years and is largely focused on helping farmworkers, who are usually of Mexican descent. Officials from the Catholic Worker estimate that at least 60 percent of Guadalupe’s adult population works to harvest food on local farms. In a town where the total population is around 7,000 people, that quickly adds up.

“We look at where we find ourselves and try to address the needs there,” Manly-Gil said. “The farmworkers have just enough work to get them through the year. They’re not stable in their living situation, but they’re not following the crops from area to area.”

Manly-Gil lives in the front of the house alongside a former farmworker who’s disabled and can no longer work. Two other volunteer community members who live in Santa Maia help to run the organization. The living expenses of Manly-Gil and the other community members along with the costs to provide services are all covered through private donations. They don’t fundraise. The house is owned by the group and also paid for through private donors. Manly-Gil said they try to live as simply as possible so most of their money can go toward helping people access food and basic medical care. He points to the UC San Diego sweater he’s wearing as an example. He didn’t go there, but the sweater was donated to the group.

Given the work they do, the group’s religious background, and its lack of focus on the numbers, measuring success in a concrete way isn’t necessarily the goal. Every Tuesday, they distribute groceries to between 90 and 160 families. A filing cabinet bulges with the medical records for at least 500 families.

Success is really measured in more anecdotal ways, such as the family who struggled to put food on the table and now owns a home or the kid who grew up and was able to attend college.

“We relish in that,” Manly-Gil said. “Maybe we were able to provide just enough help for those families in the lean times and now they’re in a better place.”

Ultimately, the point of what Manly-Gil and others do at the Catholic Worker is to simply help their neighbors in need.

“We approach this work from a spiritual perspective,” he said. “We want the focus of our time and energy to be of service to the people and just trusting that God will provide.”