Getting into the delicates: Pewter Plough brings 'Nana's Naughty Knickers' to Cambria

The phrase granny panties takes on an all-new meaning after viewing a showing of Nana’s Naughty Knickers. 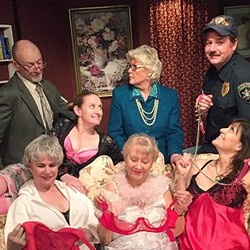 The performance began with the parting of a brand new burgundy colored velvet stage curtain to reveal the setting for our story: Nana/Sylvia’s (Barbara McKee) New York City apartment, adorned with lace and floral prints as far as the eye can see, with a painting hanging from nearly every available wall surface.

Granddaughter Bridget (Rayna Ortiz), newly accepted into law school, is rooming with Nana for the summer and has a potential love interest in newbie cop Tom (Derek Ehinger).

What promises to be a tame summer hanging with Nana and her geriatric bestie Vera (Joyce Calderone), quickly gets out of hand when Bridget discovers that Nana is running an illegal lingerie boutique out of her rent-controlled apartment (that she’s lived in since the ’30s) called Saucy Slips, etc. To which an already outraged Bridget replies, “Well why don’t you just call it Nana’s Naughty Knickers?” Yup, they did it, they said the title of the show in the show! The plot is a fun enough premise, but the script leans a bit heavily on winks to the audience.

While Bridget tries to deal with the fact that Nana is a lingerie peddler by swilling back as much vodka as possible (cuz hey, free booze when you’re living with Nana), landlord Gil (Gregory Schoonover) is on the hunt for any excuse to kick the old lady out on the streets so he can get a new tenant in the apartment and hike the rent way up. Gil attempts to recruit the law, aka Tom, in his quest, but Tom is a bit dim and a bit too busy making eyes at Bridget. Also, while Bridget and Tom are clearly written to be younger folks—one freshly accepted into law school, the other newly graduated from the police academy—the actors portraying them have the challenge of playing younger, which they go about doing with much bashfulness. It’s an understandable casting move, given that Cambria isn’t crawling with college kids, but it’s still a tad distracting.

The ante gets further upped when an order for Nana’s mysterious top client gets misplaced and a shipment from an even naughtier biz accidently gets sent to the apartment. Will Bridget’s worst fears be realized? Will Nana get arrested or evicted? Find the answer at the Pewter Plough Playhouse.

Ryah Cooley is airing out the dirty laundry at rcooley@newtimesslo.com.