As BART trundles by, Novella Carpenter milks her Ethiopian dairy goats. She feeds the chickens, ducks, and geese, their squawks mingling with the not-too-distant sirens of the inner city. She harvests honey from the beehive on her deck, the idyllic I-80 snaking across the horizon. The kitchen where she prepares her home-raised meals boasts an excellent view into the alleyway where junkies sometimes seek refuge, shoot up, and slump over.

The deadness of the Oakland ghetto gray belies the tiny, teeming ecosystem that is Carpenter’s turf. The wrong part of town, you see, is the right place for urban farming.

Carpenter is the author of Farm City: The Education of an Urban Farmer, named the 2011 Book of the Year by Cuesta College. A 100-yard lot near the Oakland apartment she rented with her boyfriend, Bill, became her own version of utopia, complete with a vegetable garden. And bees to pollinate it. And assorted fowl for eggs and meat. Rabbits, too, for a little dietary variety. And—why not?—a couple pigs, to complete the urban farming experience.

It all fit within a few blocks of downtown Oakland, in a neighborhood christened GhostTown for its abandoned houses and businesses.

“The minute that a neighborhood starts to get, you know, nice, they’re not going to live with goats next door. People are less enthusiastic about these kind of pursuits in more upper-class areas,” Carpenter explained to New Times in a phone interview. “Urban farming doesn’t increase property value.”

Therefore, would-be urban farmers have to keep their operations in the rough parts of town—places with low rent, far from developers’ interests, where neighbors are unfazed by extreme lifestyles and police generally don’t interfere unless there’s a murder.

Clever and engrossing, Farm City reveals an eye for detail on both the large and small scale. From the elaborate hierarchy of Carpenter’s beehive, to the 24-hour street theater of Oakland’s 28th St., to broader observations on the maddening wastefulness of modern humans, Carpenter’s pen picks up signals like an antenna.

While thoughtful and well researched, Farm City stays as unpretentious and raw as the neighborhood in which it was written. The area’s unkempt lexicon barges in frequently. (“Did we have baby rabbits? We had hella baby rabbits.”)

One of Carpenter’s boldest moves, chronicled in Farm City, is to test her self-reliance by living only off of her farm for a month. It sounds fantastic—until you find yourself hungrily pulling up veggies for breakfast, a caffeine withdrawal headache steadily building pressure like a storm cloud. Or going out to a restaurant just to keep your boyfriend company. Or wondering if you have it in you to slaughter one of the bunnies you raised from birth to quell the rumblings in your stomach. 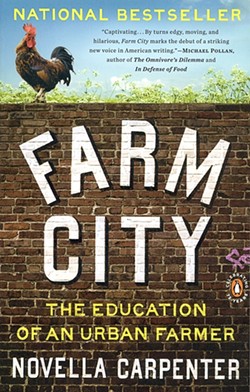 “This white rabbit had been the largest of the group—and the bully, always beating up his smaller brothers and sisters—so he made sense to kill first,” Carpenter explains.

Farm City confronts the conscience in stages. Even to the carnivorous reader, the idea of killing a cute animal by hand seems monstrous. Then, one begins to consider this: Where does the meat we eat come from? How were the animals treated? Did they enjoy open pastures and lots of sunlight? Were their bodies allowed to mature normally, or were they rendered freakish by growth hormones, making their muscles develop at obscene rates? In their last moments, were they afraid?

Next to Carpenter, the average meat consumer appears cowardly: letting someone else take care of the grim, gross stuff, happily oblivious to the way the animal on one’s plate lived and died. Using Carpenter’s model, the consumer develops a respect for the animal he or she eats, and is careful to use every part of the beast so as not to waste its life.

The author, who speaks at Cuesta College on April 6, has already inspired readers to start their own urban farms. She offers classes on the subject at the biodiesel-station-slash-urban-farming-store she runs in Berkeley.

“I’ve put forth such an extreme example that it makes less extreme things seem kind of normal,” she said.

But—lest we dwell too much on Carpenter the farmer and forget about Carpenter the writer—Farm City is also wonderfully gripping in its own right, by turns fascinating and repulsive, often expertly crafting suspense.

The author’s difficulty taking another life gives her unexpected poise when she finds her own life in jeopardy at the hands of Oakland’s jaded, gun-toting youth. The obvious parallels are left largely unaddressed, and it’s a tribute to the writer’s maturity that we are spared any overt conclusions about the food chain, evolution, karma, or whatever.

Despite the recent critical success of her book, Carpenter and her boyfriend don’t seem to feel any need to leave GhostTown—and why should they? Carpenter now owns the lot where her farm thrives, safe from the threat of shopping centers and condos.

“For a minute there,” Carpenter said of her neighborhood, “it was getting super-gentrified. Like we had Whole Foods move in, and all these hipsters were moving into the neighborhoods. But then, with the recession, it’s just back to the normal garbage and prostitutes.”

She laughed: “In some ways, a recession is good for urban farmers.”

Her bees still pollinate the garden and busily churn out honey. The chickens, bunnies, and milking goats still roam freely, no longer a neighborhood curiosity.

With her bold forays into farming—and literature—Carpenter allows us to do what many urban Americans avoid: meet our meat.