Ghostbusters: Afterlife delivers a kid-centric, nostalgia-driven homage to the 1984 original

Jason Reitman (Juno, Up in the Air) co-writes and directs this sequel to the supernatural comedy, Ghostbusters (directed by his father Ivan Reitman), about a team of parapsychologists who in 1984 save New York City from an invasion of malevolent ghosts and evil demigods. This time around, a broke, single mom, Callie (Carrie Coons), inherits a weird old farm, house, and barn in small town Summerville from her long-estranged and now dead father, Dr. Egon Spengler (played by Harold Ramis in the original) and moves her family there. Her children—teenager Trevor (Finn Wolfhard) and brilliant but odd adolescent Phoebe (Mckenna Grace)—are none too happy about the move, but then they begin to see signs of paranormal activity and discover their grandfather's workshop and ghost busting tools, and find themselves at the center of another ghost invasion. (124 min.) 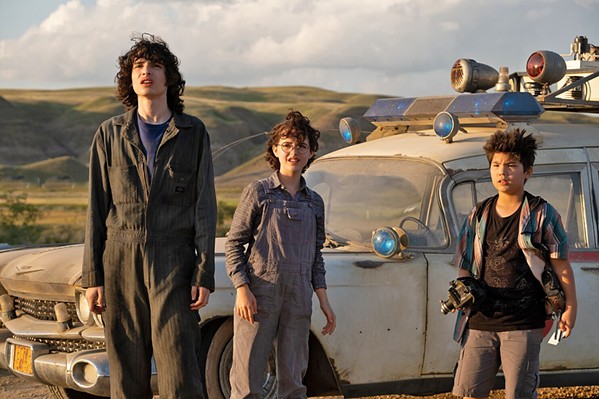 Glen After the debacle that was Ghostbusters: Answer the Call (2016), I'm happy to report this course correction has returned the franchise to its original fresh and funny splendor. It really does everything right: It puts its kid audience front and center with a couple of kid characters they can project themselves into, it finds a suitable role for funnyman Paul Rudd as seismologist Mr. Grooberson, who's lazily teaching summer school so he can keep an eye on all of Summerville's weird seismic activity, and it lovingly connects the plot to the 1984 original, bringing back in a third-act cameo from its original cast ... well, except Harold Ramis, who died in 2014 and to whom the film is dedicated. It's funny, touching, and it features well-defined characters, terrific acting, and fun special effects and driving stunts. It feels very Spielbergian in the way it centers on the twin storylines of Trevor, who's chasing after town hottie Lucky (Celeste O'Connor) and friendless, nerdy Phoebe and her budding friendship with Podcast (Logan Kim). And Rudd makes an excellent love interest for mom Callie. It was the dose of nostalgia fans have been waiting for.

Anna This is such a fun, nostalgic continuation of the Ghostbusters franchise, and certainly it's miles above the 2016 film that starred Melissa McCarthy and Kristen Wiig. It was super smart to center this on the kids—it introduces the old films to a whole new audience and gives those of us old enough to have seen the original a fresh-faced new watch. Rudd is such a great funny man and adds a whole lot here, but my favorite part was definitely Phoebe and her new friendship with Podcast. Those two are simply adorable. When Trevor unearths a dust-covered, not working old Cadillac in the garage with some odd additions, he gets it up and running. Combined with Phoebe's found ghost trap and proton pack, the crew is ready to take on the havoc-wreaking ghosts. Unfortunately, their greenness in that department shows, and they wind up in the clinker after taking out most of main street. Can you lock kids up in jail? I don't think so, but for the sake of the story and as a plot device, we'll just have to assume small town Summerville has different rules. This film shouldn't be a comparison to its 1984 predecessor—that film is far too much a classic for it to be a fair fight. However, Afterlife stands all on its own, and I had so much fun watching it!

Glen I was amazed they got original cast members Bill Murray, Dan Ackroyd, Ernie Hudson, Annie Potts, and Sigourney Weaver to come back, even for cameos, but perhaps with original director Ivan Reitman's son Jason directing this sequel, which is dedicated to the now-deceased original's co-writer and star Harold Ramis, it felt proper and necessary. The film even manages at the end to generate some deep emotions, which is rare for a comedy. To be completely forthcoming, this sequel doesn't capture the greatness of the 1984 original, but how could it? Ghostbusters is one of the best comedies of all time, and it became a cultural phenomenon. What this film does is pay sincere homage to the original and sets up the potential for more films with a more kid-centric cast. Who you gonna call? If Jason Rietman makes another, I'm gonna call Ghostbusters.

Anna Having the OG cast back even briefly was so fun; it definitely widened my smile. Both Wolfhard and Grace are flying high in their young careers right now, and it is well deserved. Logan Kim is a newbie to the big screen, but he has a bright future ahead—especially in comedy. The kid is a natural! I couldn't help but think of Martin Short's character in Only Murders in the Building who also Serial-style obsessively recorded everything for a podcast. It so gracefully nodded to the first film without trying to either be it or outdo it, and that right there is the key. It doesn't take itself too seriously and honors the genius that came before. I definitely want to watch the original again now, but I have no doubt I'll be re-watching Afterlife at some point as well. If there's more to come from this team, I'll be there! Sure, you can wait to watch this at home, but if you're safe to go to the theaters, this one is totally worth venturing out for. Δ