Ghosts in the curtains

A slender new lock on a peeling, ornate wooden door seems a poetic summation of Alison Watt Jackson’s photography exhibit “Say Goodbye to Yesteryear.” It’s the sight of the past left in the care of the present: cloistered away, gracefully succumbing to rust and rot. Watt Jackson’s striking black-and-white images—many taken in Arizona and in California’s Central Valley—depict the kind of traditional agrarian and rural lifestyles long forgotten by the cities. It’s there in the weathered squint of a Latino man in Zapeda’s Pool Hall, dusty hat cocked just so. It’s in the rusted dignity of Retired Farm Equipment, seat positioned against the sky, as if the machine’s final act was to eject its rider straight into the cloud-dappled blue. 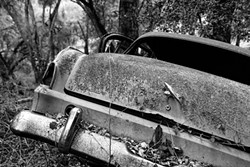 Hanging at the San Luis Obispo Museum of Art (SLOMA) through Dec. 31, “Yesteryear” is a departure from the work many have come associate with Watt Jackson. The photographer is better known for series such as “Goddess Within”—diverse images of women from circus performers to roller derby players to cooks—and “Women of the Earth,” a collection depicting women in dreamy, exalted, and quasi-mythical states of being, often digitally manipulated and superimposed into natural forms: sand dunes, leaves, forests.

“Yesteryear” seems to shift its focus from people to the traces they leave behind: the dangling ice skates of Thrift Store Goddess; the abandoned, debris-encrusted classic car in Last Stop; the thin ghostly strips of curtain dangling in the window of Yesterday; or the beautiful slices of light as seen from inside an empty barn in Still Standing. These scattered pieces of the past won’t survive another generation, and while its unlikely they’ll be missed, there’s something sad, even noble, about the way they keep hanging on.

Of course, there are people present in “Yesteryear” as well, often wiry, hard working types such as George N or Dan King. A young girl on an amusement park ride grins gleefully in Front Row Seats, her tightly clutched balloons warping the lights intriguingly. An elderly couple poses in front of their home in Kingsburg, Calif., the man tucking one hand into the pocket of what might just be his Sunday Wranglers; the woman in sensible shoes and a double string of pearls, clutching an elegant, old-fashioned purse and gazing tranquilly into the camera.

Some places depicted in “Yesteryear” appear to be maintained with pride, such as the dining room in Widow Hawkins House. Wildflowers have been arranged in a vase on the table; embroidered curtains catch the breeze from the open door. Others, such as the long-forsaken, peeling Westerner Hotel, faded lettering still advertising “a very clean” something or other, are testaments to changing times.

Life is passing/Time moves on/ With/Or without us, writes Watt Jackson in a short poem displayed alongside her work. The sight of an abandoned house or the rusting skeletons of farming equipment tend to illicit feelings of melancholy, but Watt Jackson doesn’t let the impact end there. Change reminds us/Nothing is static, she concludes, And on a deeper level/We too are vulnerable.

Arts Editor Anna Weltner lives in another time. Contact her at aweltner@newtimesslo.com.