The embattled Mark Moore's mother, wife, and father-in-law all dispute they signed loans

With her farm and home in jeopardy and at least three banks jostling to recoup their money, Gail Moore and her attorney are trying to figure out why she’s on the hook for a $900,000 loan she claims she never signed. 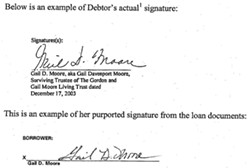 In fact, two other people have disputed they signed similar documents that bear their names. There is, however, a common thread connecting the three individuals: Mark Moore.

On March 15, New Times reported that Mark Moore is being sued by his former CEO for a number of allegations, including sexual battery and wrongful termination. The Nipomo-based Moore owns and operates a number of agricultural chemical companies under the parent company CoreClean, which do business throughout the United States and overseas. He also served as president of the San Luis Obispo County Farm Bureau from 2007 to 2009.

Multiple sources reported or alluded to an FBI loan-fraud investigation involving Moore. CoreClean’s attorney confirmed that the FBI is looking into Moore, though the bureau wouldn’t confirm or deny to New Times any such investigation.

On Feb. 23, a handful of attorneys met with a federal bankruptcy attorney to kick off what will likely be a lengthy process of determining whether a $900,000 loan to Moore Agricultural Products was forged, and by whom.

“I’m giving you latitude because I think these are important issues, and they’re going to have to be addressed at some point,” Greg Powell, an attorney with the U.S. Department of Justice Office of the United States Trustee, told one of the attorneys, according to a court transcript. “But let’s try and keep it civil and straightforward.”

“I understand,” said Tom Mouzes, an attorney for Rabobank. “This is an important issue. Serious allegations that loan documents are forged, and we can’t identify who that person might be.”

The topic that day was a bankruptcy case filed by Gail Moore, Mark Moore’s mother. According to court documents, Gail Moore was informed after she filed for bankruptcy that she owed Rabobank (formerly Mid-State Bank) $493,069 on a loan to her business drafted in 2006. The original loan was for a principal amount of $900,000, using her personal property, crops, and farm products as collateral.

Rabobank is just one creditor involved in the case. Gail Moore also owes money to Bank of America and Farm Credit West, according to court documents. But unlike the other loans, she claims she never signed the Rabobank documents nor received any money from the bank. In fact, she said she didn’t know anything about the loan until her creditors came knocking after she filed for bankruptcy on Jan. 20 of this year.

“After reviewing these documents, Debtor believes that all but one purported signature was not actually hers,” her attorney, Scott Belden, said in a written court response.

Gail Moore is the sole owner of Moore Agricultural Products, a fertilizer company she and her late husband started in Hanford in the early ’80s. The company stopped doing business about three years ago and is now effectively defunct, with more liabilities than assets, according to Gail Moore’s testimony in the court transcript.

Until recently, Gail said, she was also receiving paychecks from CoreAgri, one of her son’s companies. According to the court transcript, CoreAgri shares two buildings with Moore Agricultural Products in Hanford and Humboldt, Tenn. Despite occupying the same space as Moore Agricultural Products, CoreAgri owes as much as $80,000 in unpaid rent, according to the transcript.

Gail Moore said she did sign one loan document, which she claims she signed and returned with little thought when it was mailed to her office.

Michael Cavaletto, Mark Moore’s father-in-law, was listed as a guarantor on the loan and he, too, is disputing that he signed the loan, according to a response letter Belden filed with the court.

Rabobank is investigating the loan and the allegations of forgery, according to court documents.

At the Feb. 23 hearing, Gail Moore refused to speculate who may have forged her signature, despite repeated attempts by Mouzes to get an answer. Belden instructed her not to speculate or name names. With no suspected forger identified, Rabobank claims the loan is legit and it’s owed money. In a letter to the court, Mouzes said Gail Moore and her attorney were “stonewalling” the bank by refusing to identify the alleged forger.

But in a response to that letter, Belden wrote, “Given that the funds went to Moore Agricultural Products, Inc., which was then run by a different CEO (who is named at least six times in Rabobank’s status conference statement) Debtor does not believe that her unwillingness to speculate (on the advice of her counsel) constitutes stonewalling the bank.”

Darrell Freeman, formerly of Rabobank, signed off on one of the allegedly forged documents. Freeman told New Times he’s retired from Rabobank, but he declined to comment further, other than acknowledging he knows Mark Moore, who was one of his customers.

“I’m just not going to comment on anything,” he said. “I know Mark, and that’s all I’m going to say.”

Mark Moore’s wife, Laurie, has also contested a loan she purportedly signed. In a lawsuit brought by Heritage Oaks Bank, Laurie was listed alongside Mark and his various companies—CoreClean, American Micro Tech, and Omni Agri, for example—as a defendant. The bank alleges both Moores defaulted on loans to the tune of $1.8 million to $2 million. But Laurie claims she didn’t sign off on those documents.

New Times took three samples of Mark’s and Laurie’s signatures from that lawsuit and others filed previously by Heritage Oaks and Wells Fargo to a handwriting expert. The expert compared those signatures with three other samples from notarized documents filed with the SLO County Clerk-Recorder. The expert said it appeared Laurie didn’t sign the loan documents, but clarified more materials would be needed to make a conclusion that would stand up in court.

However, one of Laurie’s attorneys, Santa Barbara-based Nathan Rogers, said she’s disputing most if not all of the signatures purported to be hers. Asked who might have forged her signature, Rogers said, “Just based on different suits that are pending out there and investigations … we can’t comment.”

One of Mark’s attorneys, Bruce Zabarauskas, declined to comment when asked if his client was also disputing any of the signatures.

“We’re not going to comment to the press right now on any of the allegations,” Zabarauskas said. He referred New Times to another attorney, Jeff Rutherford, who specializes in the Foreign Corrupt Practices Act: White Collar & Regulatory Enforcement. Rutherford didn’t return a call for comment.