Gifts for SLO: Nomadic Artifacts strives to create 'economy of gifting' through activities and actions

Whether it be a piece of art or a clean beach, Logan Leggs believes in bestowing gifts to his community.

Nomadic Artifacts, a local art collective headed by Leggs, hosted its first major project on July 1: a gathering of volunteers to pick up litter at Pirate’s Cove. The Facebook page for the event had 80 RSVPs, and there were five videographers in attendance to document it. However, this project was only the first step in a much bigger plan. 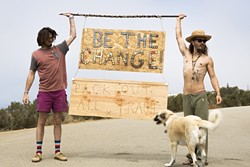 Leggs plans on spreading the “pack it out” mentality through a series of videos that will not only teach people how to effectively pick up after themselves, but also bring awareness to the consequences of not doing so. For example, Leggs recalled once when he was rock climbing at the beach and cut his hand on some glass while hanging from a ledge.

“It’s a much bigger problem than an eyesore,” he said.

The main philosophy behind Nomadic Artifacts is to create an “economy of gifting,” in the hopes of diminishing the gap between those who have money and those who do not. Leggs was inspired by his family’s smoothie shop in South Carolina, which was eventually turned into a vegan restaurant without prices. The restaurant survived on donations and community support, and provided its customers with tips on how to live a healthy lifestyle in addition to serving up healthy food.

“It’s a mindset of building relationships instead of transactions,” Leggs said. “I wanted to bring that to California because it’s the most influential place in the world.”

Nowadays, Leggs prefers to share his message through something more permanent than food. Nomadic Artifacts creates and distributes a series of six handmade pendants called Tokens of Inspiration, each design representing an idea. The most coveted is the Unity Token, which is only given to those who attend a Nomadic Artifacts gathering such as the Pirate’s Cove cleanup. The rest, including a variation of the Focus Token that was created with bottle caps to draw attention to the trash problem, Leggs carries in his pockets so that he may either give them away or exchange them for services.

“Any piece of art that we give, we give with purpose,” he said. “We don’t give art just for the sake of having art.”

By doing this, Leggs hopes to challenge the idea that one needs money in order to accomplish things. He believes that passionate and motivated people are what we really need.

“I’m technically homeless in the eyes of the U.S. government, and I’m happier that way,” he said. “I wake up and I do whatever I want. The community magically takes care of me because I hold myself accountable for taking care of them.”

“We want to make a list of all of the problems that we see, and then develop solutions for those problems,” Leggs said. “We don’t like just talking about problems, because that doesn’t solve anything and just brings negative energy.”

In the meantime, Nomadic Artifacts will continue to spread its philosophy of giving and building relationships. More information about the group’s activities can be found on the Nomadic Artifacts Facebook page.

“We all have an abundance of something,” Leggs said. “That’s what this gift of economy is about. We want everyone to bring their abundance and share it.”