Alzheimer’s can be a tough situation for everybody. No one wants to see a loved one experience any form of dementia, and helping them through it can be a very emotional and taxing process that leaves caregivers feeling drained and isolated.

One care provider is trying to address that a little bit at a time by offering free training for businesses and their employees to recognize and handle situations where someone may have Alzheimer’s or some form of dementia. 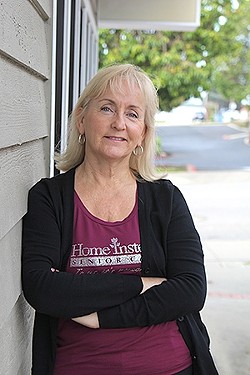 Carol Rose, who co-owns a local Home Instead Senior Care franchise with Tiffany Alcantara, said that it’s important—and perhaps inevitable—for businesses to learn how to deal with patrons who have a type of dementia. Whether a person with dementia is alone in a business while having an issue with memory or physical orientation, or is accompanied by a caregiver or family member, it’s important for those who deal with the public to understand that an interaction may be a sensitive situation.

“There’s a savvy way to deal with somebody and to be able to re-direct them,” Rose said.

The training itself is quick and simple—it takes about a half hour and is followed by a 10-question quiz. The training can be done online, or a trainer can go to the business to do it or teach a manager to give the training.

The goal is to give employees the tools to know how to recognize and respond to a situation that may involve a person who has some type of dementia.

“What would they do if they had somebody in an aisle that’s confused or doesn’t know where they are?” Rose said. “The Alzheimer’s-friendly business has a way of training their staff to help the shopper to not become agitated or afraid, and they can direct them in the right way with the right skill set.”

That skill set will equip employees with tips on how to help someone who is struggling with a fit of memory loss or confusion and how to avoid escalating the situation. If a grocery store employee notices someone dropping or spilling something in the aisles, for example, Rose recommends that employees don’t come up to that person from behind, but instead to approach them from the front, slowly, to avoid startling them.

“We’re taught how to identify, maybe use a comforting tone of voice, and try to redirect them,” Rose said.

The idea is to recognize where they are, and bring them back from there.

Rose says dementia is widespread and growing, especially as people learn more about the disease.

In 2013, 44.4 million people suffered from a form of dementia, and that number is growing. According to Alzheimer’s Disease International, the number of people worldwide with dementia is expected to increase to 75.6 million people by 2030, and 135.5 million in 2050.

With that growing number of dementia cases comes the need for a larger support structure within society. Rose said that it may be uncomfortable for people who haven’t had any experience dealing with people suffering from dementia, but they shouldn’t be afraid.

For more information on the Alzheimer’s Friendly Business program, go to www.alzheimersfriendlybusiness.com.