GleanSLO: Reclaiming the county's forgotten produce, one pick at a time

View photos of the recent harvest.

Sixty-four-year-old Chuck Asmus is perched high on a ladder, wrestling bright orange clementine oranges from branches heavy with fruit. About a dozen GleanSLO volunteers are at work on the steep hillside, and you can hear the swish of nimble fingers examining, snipping, and dropping the orange orbs into deep canvas bags slung around sweaty shoulders.

While some volunteers prefer to use a tall stick with a basket-like claw on one end to dislodge the highest fruit in the orchard, Asmus prefers the ladder, especially for a view like this. The surrounding Avila hills are blazing green thanks to recent rains; the air is a balmy blanket of herbaceous rosemary and fresh citrus blossom perfume. Below, hundreds of apple trees are blooming with flushed red flowers. Asmus squints into the sun, his arms in perpetual motion.

“I’ve been on something like 450-plus gleans in SLO,” he says, flashing a smile that reveals that this fact surprises even himself. Like everyone else in this orchard, he wasn’t always a gleaner. It all started in 2001, when a longtime volunteer invited Asmus on his first citrus glean in Nipomo.

Recently retired and restless, Asmus decided, “why not?” There was no commitment, nothing to sign, no club to join. Gleans are, by their very nature, spontaneous. Someone’s got a backyard lemon tree overflowing with fruit, or a local farm’s got a few extra pounds of green beans. Whoever can go pick them, does. And on that day, Asmus decided he could be one of those people.

“That was it, after that beautiful day picking at Clamshell Ranch,” Asmus says.

Maybe it’s the breathtaking locales (he and his fellow gleaners spoke wistfully of blueberry and avocado gleans in Cambria), or maybe it’s the social aspect (gleans can range from meditative to boisterous, depending on the group), but it’s the social obligation that tugs hardest at his heart.

This particular glean—of tangy, concentrated citrus with juice sweeter than candy—is bound for those who truly need it.

The estimated 1,234 pounds of fruit will go to the Food Bank Coalition of SLO County, which feeds hungry families across the Central Coast. And it all happened because one homeowner in the gated neighborhood gave GleanSLO a call.

“You’re saving something precious,” Asmus says, dropping a handful of fruit into his bag with a thump. “Nature goes through this whole ordeal; to not save this fruit would be a tragedy. You just know it’s the right thing to do.” 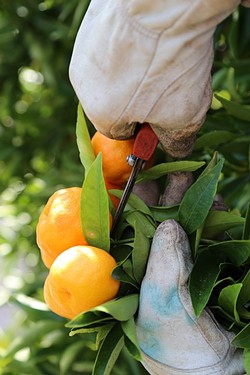 How many pounds of fruit are currently wasting away in your own backyard? This is a question GleanSLO Project Manager Joshua Ayers wants to ask us. For the record, he was an editor inspired to work for GleanSLO after an epic arugula glean at Talley Farms in Arroyo Grande two years ago.

“There truly is so much food waste happening, and at the same time, there are families who don’t have food on a consistent basis. This is an awesome cause, and I get to be outside,” Ayers says. Like everyone here, he’s hard at work while being interviewed. Cardboard boxes are starting to overflow with the bounty, and foreheads are glistening under the sun. Still, you can get a lot done in two hours.

“You may have 15 people helping pick radishes, and all of a sudden, you’ve got half a ton, and you know that’s going to a family that needs it,” Ayers says. “That’s pretty incredible.”

Last year, The Food Bank Coalition of SLO County distributed more than 3 million pounds of produce, and about 209,000 pounds of that was picked in backyards and farms across the Central Coast.

A portion of that food was also recovered from other venues such as farmers’ markets and school fruit drives, and the rescued produce was distributed through a string of programs hosted by the food bank. These programs include the Children’s Farmers’ Market Program, where kids get their hands in the mix. (Ayers says it’s amazing to see youngsters so excited about kale and onions.)

From Ayers’ perspective, it isn’t just the number of pounds of food that’s impressive. It’s the mind shift that ordinary people go through when they realize the rich resource thriving in their backyard. These once invisible heroes, many planted as delicious heirloom varieties decades ago, are finally recognized for their nutrition and flavor.

“We had three gleaners at a backyard harvest for one fruit tree and 700-plus pounds of grapefruit came off of that tree,” Ayers says. “When you give someone a metric like that, they have no idea they had that much to give. Then, they’re doubly surprised to know that that fruit might be going to children in need, that very day.”

This is how ordinary, everyday people become something more. They put on their gloves and canvas bags and become gleaners. Asmus just celebrated his 65th birthday. I asked him what a hardcore gleaner does to celebrate. He thought for a moment, the day’s zesty juice lingering on his lips.

“Well,” Asmus concludes, still picking, “He sits down and enjoys the fruits of his labor and the company that he’s with.”

Hayley Thomas is looking into the GleanSLO lifestyle. She can be reached at hthomas@newtimesslo.com.