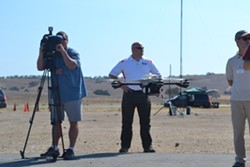 Though it was only the size of a personal pizza, a sizeable crowd of journalists, defense contractors, and military officers clustered around the drone hovering at eye-level.

Behind the controls of the InstantEye drone, Thomas Vaneck of Boston-area tech company Physical Sciences Inc., grinned, and flicked the joystick upwards.

The assembled crowd oohed and aahed as the four-propeller drone shot directly up into the sky—recording the revelers in high definition.

This was just one of the almost 70 experiments conducted from Aug. 5-8 at Camp Roberts as part of the Joint Interagency Field Exploration (JIFX) event run by the Naval Postgraduate School in Monterey.

Camp Roberts, a dusty, expansive National Guard base straddling the border between San Luis Obispo and Monterey counties, was invigorated by the event, which brought over 400 scientists and consultants from as far away as Israel and the United Kingdom to experiment, tweak, and scout cutting-edge technology.

“We like to think of this event as a tech-oriented ‘Burning Man’ for government,” said Ray Buettner Jr., an associate professor at the NPS and director of the JIFX event. “It’s a collaborative learning environment with minimal rules where producers can get feedback from their consumers.”

In the media “briefing tent” Buettner told New Times that the NPS received over 90 submissions for experimentation and/or demonstration—accepting slightly fewer than 70. An impressively crowded wall of white papers at the JIFX command center paid testament to that diversity of ideas.

At the McMillan Airfield, host to many of the experiments, interests were identifiable by their attire. There was the rumpled semi-casual of journalists and academics, the stiff boots and camouflage of Army and Navy officers, and the branded polo shirts of defense contractors. 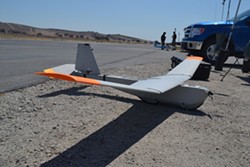 Chung explained that this experiment consisted of a 50 v. 50 drone challenge, with the red drone team taking on the blue drone team. The glider-shaped drones are cheap to make and easy to control.

“It’s 50 non-human cognitive entities interacting with 50 of the same in a space that’s both physical and temporal,” Buettner said. “That’s science fiction, man.”

“Drone” is somewhat of a taboo word here. Where the alphabet soup runs thick and political correctness is a mandate, the preferred vernacular is unmanned aerial vehicle (UAV).

That said, the drones being tested at Camp Roberts are a long ways from the missile-blasting Predator drones often deployed in the skies of Yemen, Pakistan, or Somalia.

Even the heaviest drones being tested here weigh a mere 22 pounds, and none of them are weaponized. Primary applications for these nimble, remote-operated drones include agriculture, surveillance, and disaster response.

Buettner, on the other hand, offered a more measured take.

“One of my jobs is to create a robust discussion around the ethics of ubiquitous data collection and armed lethal force,” Buettner said. “We are looking for inexpensive ways to make better decisions on the battlefield.”

Though the drones were the main attraction, roughly 25 percent of the experiments at Camp Roberts were in the fields of humanitarian aid and disaster relief.

Working under the blistering midday sun, Army personnel were constructing a S.I.P. (structural insulated panel) hut, a more durable form of temporary housing designed to be built in a mere six hours.

“When y’all get done here, I need one of those in my back yard,” quipped a passing Army officer.

FEMA officials, buzzing around in a specially-constructed “disaster recovery center,” were testing out their “cellular activity heat map,” which helps to locate those in need of rescue during a disaster.

“We like to think of it as ‘everyone helping everyone,’” said Desiree Matel-Anderson, FEMA’s chief innovation advisor.

As JIFX officials announced the imminent landing of a 13-pound Puma drone, observers gathered around the small airstrip.

Adam MacDonald, a business development director at AeroVironment—the company that makes the drone—enthusiastically described the radar-mapping abilities of the drone and its milestone certification on July 26 by the Federal Aviation Administration for civilian use. After the Puma landed, MacDonald flagged down an assistant carrying the drone from its landing site for a hands-on demo.

“Can you pass me that Puma, bro?” MacDonald asked.

Though no money changed hands at the JIFX event and many of the technologies are still in their beta phase, Buettner said he saw the future of the military scattered among these experiments.

“I get excited when I see people looking over new technology and saying ‘what if?’ or ‘maybe we could,’” Buettner said. “You can influence the views of officers, and you can influence which technologies make it to the battlefield—and we get to do both.”