Glitter trash act Hayley and the Crushers releases their new vinyl at O'Sullivan's Pub on Jan. 31

Hayley and the Crushers' new album, Vintage Millennial, kicks off with "Put a Little Action In Ya," a two-minute barnburner that sounds like it was a hidden track on an early Go-Go's album. Dripping with sexual innuendo and with tongue firmly in cheek, Hayley sings, "So tired of missing your love. I think it's time I put a little action in ya." This is sugarcoated pop punk at its finest! 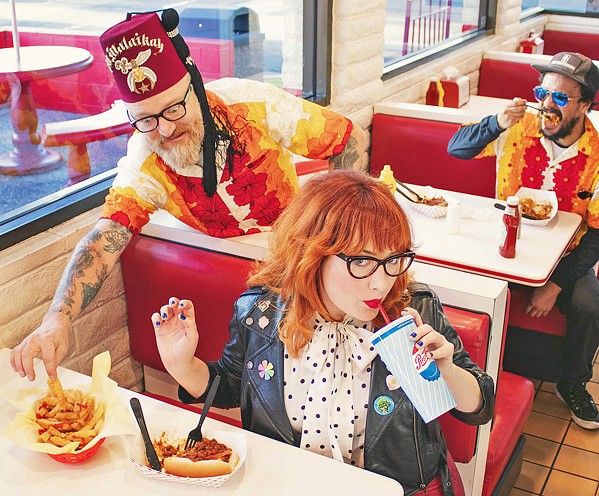 They call their genre Poolside Glitter Trash, describing it as "one part soda pop punk, a splash of '60s surf, and all the bad girl fun." Expect mermaid references! Not only will you hear a nod to the The Go-Go's, but there's also a dose of The Pandoras, The Bangles, The B-52s, and other new wave-era acts mixed into the power trio's sound. Oh, and a Ramones anti-tribute!

The new record was released on pink vinyl by Eccentric Pop Records, the band's second full-length on the label and their third album overall. If you don't have a record player, the new album is streaming everywhere.

The band's current bio reads, "Led by Gretsch-wielding front woman Hayley Crusher Cain and her nefarious crushers (evil bassist Dr. Cain Esquire and drummer 'Action' Benjamin Cabreana), the group has been described as 'a demonic version of the Go-Go's or 'like Bazooka bubblegum stuck to the bottom of your combat boot.' Both would be at least partly correct! The band has been touring the West Coast and Midwest extensively after the release of their sophomore album, COOL/LAME in September 2018."

True story! The band, whose home base is SLO Town, has been living out of their tour van and traveling the country, bringing their snarky, high-energy "Pop Rocks exploding out of Nehi Grape Soda" sounds to the masses.

In addition to making great music and putting on kick-ass shows, the band could also write the book on self-promotion. They have a top-notch website, they're always doing fun new photo shoots, their social media presence is widespread, and they know how to appeal to their fans.

Here's what they wrote for those who pre-ordered their new record: "Release the MerKraken! Vintage Millennial officially greets the world today! Stream everywhere, dance anywhere (just be sure to share your cool moves with us, OK?) If you pre-ordered the album and tee bundle, double high fives! We have packed up your goodies and they will be shipped out this week. We added a super '90s handmade lyric zine with your order! Why would we spend extra hours at the Xerox machine? Well, we're so grateful to have such a kind and cool Crusher family. We would've added cookies and perhaps some nice herbal soap in there, but there's only so much time in the day and room in the box—still, we probably should make grandma-core a thing, right? There's no way around it: We aren't afraid to sound cheesy. Pile on the pepper jack! We're not crying. You're crying."

If you want to see pop punk done right, come to O'Sullivan's Pub! These three know how to throw a party! DJ Daisy Van Tassel and Pure Love Gang will open.

First of all, if you'd hoped to see Courtney Barnett on Saturday, Feb. 1, in the Fremont Theater, you're too late. She sold out. You've got to be on that shit, people! However, EDM fans rejoice. Fremont has two shows coming at you this week.

Electronic music producer Minnesota takes the stage this Thursday, Jan. 30 (doors at 8 p.m.; all ages; $24.96 at Boo Boo's and fremontslo.com), with Thelem, Eastghost, and Call Me opening. Minnesota came out of the West Coast bass music movement, developing into an innovative and proficient electronic producer whose "sound breaks away from the various subgenres of EDM but holds onto origins of dubstep and hip-hop," according to his bio. 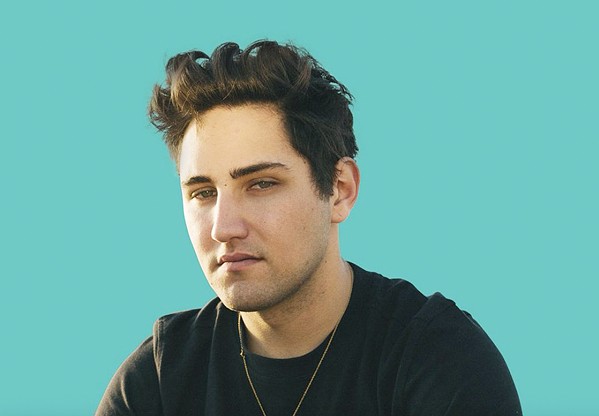 Jauz Dangerous Waters Tour comes to the Fremont on Wednesday, Feb. 5 (doors at 8 p.m.; all ages; $39.04 at Boo Boo's and fremontslo.com), with Drezo opening. Jauz is Sam Vogel, an LA-based EDM producer who's been endorsed by the likes of Zedd, Skrillex, and Diplo.

"Through his compositions and remixes, [Jauz] aims to represent the darker and more imaginative side of EDM," his bio proclaims.

Smokies if you got 'em

Numbskull and Good Medicine presents acoustic bluegrass-influenced band The Lil Smokies at The Siren on Friday, Jan. 31 (7:30 p.m.; 21-and-older; $18 presale at Boo Boo's and eventbrite.com or $20 at the door), with Brent Cowles opening.

Don't let their acoustic lineup fool you, this isn't a sleepy folk band. The Lil Smokies play with electrifying energy as they deliver bluegrass roots sounds with the punch of rock!

With Scott Parker on bass, Jake Simpson on fiddle, Matt Rieger on guitar, Matt Cornette on banjo, and Andy Dunnigan on dobro, they've won the 2015 Telluride Bluegrass Band competition and took home the 2016 IBMA Momentum Band of the Year award.

They're touring in support of Tornillo, their third studio album, produced by Bill Reynolds (The Avett Brothers, Band of Horses).

"Recorded at Sonic Ranch studio and inspired by the great outdoors, Tornillo paints a picture of longing for home, missing loved ones, and all the tribulations that come from spending years hustling on the road," according to press materials. "During the recording process, the band pursued activities like rafting, fly-fishing, hiking, and rock-climbing, which all played a role in creating the space and emotion that's so apparent on the record."

Also at The Siren this week, check out Yächtley Crëw on Saturday, Feb. 1 (doors at 8 p.m.; 21-and-older; $20 presale at Boo Boo's, Traffic Records, and eventbrite.com, or $25 at the door). They bill themselves at "The nation's favorite Yacht Rock band," and the "The Titans of Soft Rock." Hear classic soft rock covers such as "Brandy," "Africa," and "Escape (The Piña Colada Song)."

Reggae pioneer Bob Marley's birthday is on Feb. 6, and if alive, he'd be turning 75. To celebrate, SLO Brew Rock is hosting the family friendly Bob Marley Day on Saturday, Feb. 1 (4 p.m.; all ages; $12 at slobrew.com).

Chill out to the reggae sounds of Ras Danny & The Reggae All-Stars, Resination, True Zion, and Dante Marsh & The Vibe Setters.

Derrick "Ras Danny" Reid was actually a protégé of Marley's, having grown up in Trench Town. After Bob's death, Ras Danny and his longtime friend, Errol Organs, organized the first Bob Marley tribute concert in Jamaica, an annual event that continues today!

"Bob Marley was, to me, a teacher," Ras Danny said. "When Bob Marley passed off, a group of us in Trench Town did the first Bob Marley tribute show. The next year his wife and mother joined us, and it's been going on ever since."

Come on out for some great music and camaraderie as Marley's life and enduring message are celebrated.

"Restless Wind is a portrayal of Winston's place in a chaotic world—his compositions extend solace with an idiosyncratic grace," according to press materials, which added that Winston is "committed to supporting local food banks and encourages Spanos Theatre patrons to please bring canned goods for donation at the theater in support the Food Bank Coalition of SLO County."

The Ethnic Heritage Ensemble is celebrating its 47th year of touring, and thanks to KCBX's Jazz Liner Notes host Fred Friedman, they're coming to 4 Cats Café this Tuesday, Feb. 4 (7:30 p.m.; all ages; free).

Created by famed multi-instrumentalist and composer Kahil El'Zabar, the ensemble is known for its remarkable improvisational skills as they work in and around contemporary African American music styles such as jazz and funk, as well as traditional African instrumentation and rhythms.

After heading south for a few years, getting married, and starting a family, beloved local singer-songwriter Jody Mulgrew has returned to the Central Coast and begins a four-month residency at The Savory Palette (formerly the Morro Bay Wine Seller) in Morro Bay, beginning this Friday, Jan. 31 (6:30 p.m.), and continuing with the final Friday of every month through April. The troubadour-crooner has a singular voice and writes wonderful award-winning songs. He was recognized by The Songwriter's Hall of Fame in New York with an Award of Excellence in 2012. He's also won two Best Album awards at the New Times Music Awards.

The Frog and Peach Pub hosts a reggae doubleheader on Friday, Jan. 31, when Sunny State and Kruel Summer share the bill (10 p.m.; 21-and-older). It's dank, green reggae for you! Winning! Δ