The Glitterotica Burlesque and Drag Show will be held at the SLO Guild Hall on Feb. 15 and 16. Doors open at 7 p.m. and the show starts at 8 p.m. Attendees must be 21 and over. Tickets range from $20 to $40. Beer from Libertine Brewing and food from the Zen Dog food truck will be available for purchase. Visit glitteroticaburlesque.com for tickets and more information.

For Alex Milaychev, bigger is better. Beyond that, she's not too picky, though she is partial to gold.

"In person, the fine glitter is nice, but on stage you need the bigger pieces to catch the light," she said. 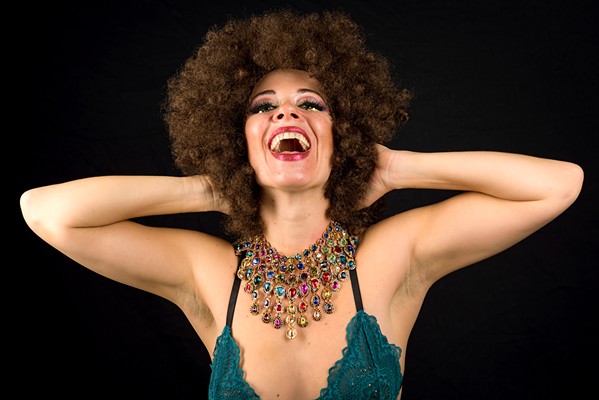 But Milaychev once hated glitter. Despite being a lifelong dancer who started in ballet, toured with a modern dance company in college, and worked as a professional ballroom dancer, there was no love lost between Milaychev and the shiny stuff.

"When I first moved here and started performing aerial silks, I didn't want to wear glitter because it would get everywhere," she said. "I couldn't get it out. I had an OCD thing."

‘It’s ok to be sexy. It’s not a shameful thing.”—Alex Milaychev, founder of Glitterotica Burlesque tweet this

While glitter hasn't changed, Milaychev's affinity for all things sparkly has. When she took on the role of the tooth fairy in a production, she realized that a glittery face mask would be just the thing to round out her costume.

"I thought it was really cool for the character, so I got over it," Milaychev said.

The rest is a haze of shimmery history. While performing aerial silks, Milaychev met people from the local burlesque community and went to her first SLO Tease Burlesque show.

"There was this feeling that I had when I watched the show that was very inspiring," Milaychev said. "It was about sexual freedom, and the audience was so supportive. Everyone just exudes this confidence. It was a part of me that was closed off." 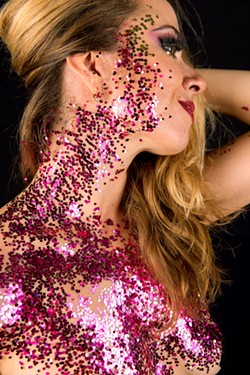 Not to worry, while some of the performers will be wearing glitter, no audience member will be showered with sparkles. In a whimsical twist, Glitterotica Burlesque's first venue actually doesn't allow glitter. It's in the fine print and everything. After all, Milaychev knows that glitter just isn't for everyone.

The show features about 20 performers, including burlesque dancers, drag queens, and even one drag king. Sabrina Pratt of Central Coast Comedy Theater will host the show, and Shawna Maria of Ignite Movement Studio will perform a twerking piece. One burlesque performance will be aptly set to the number "The Glitter Song," and it tells the tale of a girl who wakes up unable to remember the night before, but finds glitter ... everywhere.

As for Milaychev, her piece is set to the song "Psycho" by Lauren Aquilina. For it she portrays a character who's obsessed with her ex-boyfriend.

"I try to do physical pieces, so I'll be doing this piece in a straight jacket," Milaychev said. And of course she'll be rocking some sparkles in the form of a huge, gaudy rainbow rhinestone necklace.

While Milaychev wants audience members to expect boobies and butts galore, she also hopes they get a little something more out of the Glitterotica Burlesque and Drag Show.

"It's OK to be sexy," Milaychev said. "It's not a shameful thing. Women can support other women. And we don't have to hide in our clothing. It's a safe community. We're all about consent, communication, and boundaries." Δ