Let’s not forget local punk juggernauts New Tomorrow with opening act The Mighty Fine on Thursday, Jan. 26 (7 p.m.; all ages; $8 presale or $10 at the door). New Tomorrow took to the road a while ago, but now they’re back, which means it’s time for—as their bio says—“stage diving, mic grabbing, circle pitting, pile-ons, shoe losing, getting your glasses broken, sing-a-longs, and fists in the air.” 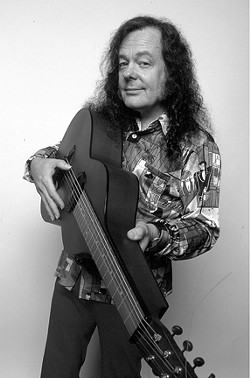 Geoff Tate never wanted to be a metal singer. When he first joined Queensrÿche—then called The Mob—for a small music festival, he had no plans of staying with the band, and didn’t, but he came back again later when they recorded their first songs. After their four-track demo was rejected by every label the band approached, it started getting handed around and was well received by both metal fans and rock publications like Kerrang!, which gave it a glowing review. Soon the labels couldn’t ignore the band anymore. Tate, for his reluctant part, has been named 14th on Hit Parader’s 100 Greatest Metal Vocalists list. He was voted No. 2 on That Metal Show’s top five metal vocalists of all time, beating out Rob Halford, Axl Rose, and Sebastian Bach (Iron Maiden’s Bruce Dickinson won). In short, he rocks! See him unplugged on Saturday, Jan. 28 (7:30 p.m.; 21-and-older; $20 presale or $25 at the door).

David Lindley is well known around these parts as an incredible innovator on all stringed instruments. The multi-instrumentalist was a longtime sideman to Jackson Browne and led his own eclectic band El Rayo-X for years, but it’s really been his ongoing interest in world music in which he “effortlessly combines American folk, blues, and bluegrass traditions with elements from African, Arabic, Asian, Celtic, Malagasy, and Turkish musical sources,” says his bio. He puts on a fantastic live show, which you can see on Sunday, Jan. 29 (6:30 p.m.; all ages; $22 presale or $25 at the door).

Secret Chiefs 3 has been best described by Pitchfork, whose Jonathan Zwickel said of the group’s newest album, Book of Horizons, it’s the band’s “most expansive and coherent statement, an alchemical fusion of Morricone-esque cinematic grandeur, midnight surf guitar, traditional Middle Eastern rhythms and time signatures, demonic death metal, and electronic deviance that yields a work of undeniable force.” Dengue Fever features a Cambodia pop star singing psychedelic rock oldies from ’60s-era Cambodia, sometimes in Khmer! And yes, the band’s as awesomely crazy as that description sounds. For those who like to stretch their musical comfort zones, the show on Tuesday, Jan. 31, is the one for you (8 p.m.; all ages; $15 presale or $17 at the door). 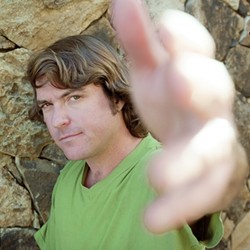 Keller Williams is such an all-out monster musician that his show simply amazes! A sparkling performer, he’s also a leading proponent of looping technology, so his solo performances can frequently sound like a full band as he lays down one track after another live on stage, building the repeated layers into a remarkably full sound. Recently, he’s turned his recording attentions to a CD of covers, noting, “I’m a music lover first, a musician second, and a songwriter third, so a covers record is a natural progression for me. I love writing songs and I love performing my songs—almost all of them. But I go out and do about 120 shows a year, and I just can’t write enough to play new songs all the time. There are always different cover songs to learn, though; just flipping around on the radio, next thing you know you’ve got a song stuck in your head. If you change it around and play it completely differently, it sounds like a whole new song.” His most recent album, Bass, features him on bass! See him Wednesday, Feb. 1 (7:30 p.m.; all ages; $20 presale or $23 at the door).

I’m going to tell you about ALO (Animal Liberation Orchestra) today, even though the show isn’t until Thursday, Feb. 2 (7:30 p.m.; 21-and-older; $20 presale or $23 at the door), with Nicki Bluhm & The Grambles opening. Why? Because this is going to be an awesome show, and may very well sell out (just like the recent Citizen Cope and All American Rejects shows!), so if you want to go, you’ll want to get some tickets now! Anyway, this is a band that really epitomized the Do It Yourself philosophy, building a huge following based on self-recording, self-promotion, and lots of touring. Today, they’re signed to Jack Johnson’s Brushfire Records, and their most recent album is the stunning Man of the World, an 11-track album they recorded in Hawaii in mostly live recording sessions. Listen to it and you’ll get the most accurate example of what they sound like on stage.

Steve Key’s Songwriters at Play showcases kick off on Thursday, Jan. 26, with Lucy Billings at The Porch (6:30 p.m.; all ages; tips accepted). Billings’ songs have been described as “refreshingly honest, authentic, and captivating,” and her voice, “crystal clear” and “lovely.” This former cowgirl, research scientist, and corporate lawyer will inspire you. 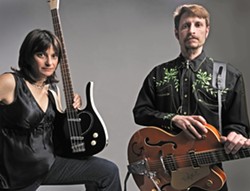 Come Sunday, Jan. 29, check out the rockin’ Ballistic Cats at Sculpterra Winery (1 p.m.; all ages; tips accepted). Usually performing as an electric band, they’ll appear as an acoustic duo for this show. “We have a big collection of originals so we could easily do a full set with no covers—we’d throw in a Muddy Waters tune or two also if we could get away with it,” said guitarist Matt White, who’ll be joined by bassist and lead vocalist Lissy Abraham.

Don Lampson is the musical embodiment of a barbed leather whip, old spurs, and a hobo’s knapsack, and he’ll be at Kreuzberg on Tuesday, Jan. 31, to celebrate his birthday the best way he knows how: playing and singing songs as rustic, interesting, and rascally as he is! Special guests include Off the Griddle, an eight-member old-time string band, who will follow Don and play the closing set of the show (6:30 p.m.; all ages; tips accepted).

The showcase includes one featured act and five or six others playing four-song sets.

DJ and producer extraordinaire Felix Cartal has a new club pop album coming out, Different Faces (due on March 27), and a show to support it at the Graduate on Saturday, Jan. 28.

He’s currently on Steve Aoki’s Dim Mak Records label, and according to Aoki in press materials for the show, “Cartal’s second album really showcases the pop side of his production. What you get in his track ‘Don’t Turn On the Lights’ is huge massive drops you would hear in his original productions previous to this, but now with a huge vocal. We crown this one mental.”

The new single (and the video for it) is available online if you want a listen.

“‘Don’t Turn On The Lights’ is a chance for me to try some more memorable melodies,” Cartal said. “I really wanted to create something that people could hum along to, something that they would recognize instantly, but still with powerful, hard-hitting production behind it. Polina’s vocals really helped bring this song together to make it one of the catchiest songs I feel that I’ve ever produced.”

Try the venue for tickets as tickets online are sold out (8:30 p.m.; 18-and-older). The show also includes 12th Planet and Audiobit. 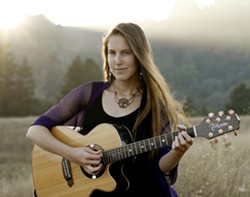 Are you ready for a philosophical folk and Swedish farm jazz mash-up? Well, ready or not, here it comes when Amanda West and Inga Swearingen play the Steynberg Gallery on Friday, Jan. 27 (7 p.m.; all ages; $15 at the door). “She and I have shared several shows up here in Santa Cruz, and it will be fun to finally do one down there together,” said Amanda, who also mentioned her new single: “The big news in my music world is that I’ve just released a new single, called ‘Habit’ (it’s an appropriate New Year’s song), probably the most catchy and finely produced thing I’ve put out in the world. I think you’ll enjoy it.” Amanda West will also play with multi-instrumentalist Pete Solomon on Saturday Jan. 28, at the Gather Wine Bar at 7 p.m.

Shuck you, man! The Mother Corn Shuckers are opening the barn door, hosing themselves off, jumping in the old pickup truck, and heading your way with their newest member, Cody St. James. Said front man Che Miller, Cody’s “bringing a new sound to the band and we’re fired up like an out-of-control harvester with no steering wheel!” See them at the Fuel Dock on Saturday, Jan. 28, from 3 to 6 p.m. and then later that night from 9 to midnight at the Merrimaker.

You can check out studio musician Adam Levine and Friends on Saturday, Jan. 28, when they play from 8 to 10 p.m. at D’Anbino ($10, or $5 for Record Club members). Levine plays guitar, composes, and produces music for TV, film, and recording projects. He also fronts an eclectic group called Human Nation, composes and arranges from his recording studio in Paso Robles, and is a jazz guitar instructor for National Guitar Workshops of San Francisco. He cites world music, acoustic steel string fingerstyle guitar, jazz, and blues as influences. Check him out as he performs with some of the county’s best musicians.

Lake Tahoe-based Dead Winter Carpenters are heading to Frog and Peach on Saturday, Jan 28. “The band seamlessly blends Americana with roots rock and a tinge of straightforward ‘tell-it-like-it-is’ alt.country for hard-hitting performances that are as edgy as they are whimsical,” according to their band bio.

Youkali, Brynn Albanese, and Duane Inglish are joining forces for a fiddle and accordion show at Steynberg on Sunday, Jan. 29, from 4 to 6 p.m. ($15). The traveling trio Youkali, from Sebastopol, will “split the bill, kibitz, and cajole with local favorites Duane Inglish and Brynn Albanese, members of the fabulous Cafe Musique!” according to concert organizers. “Come early and stay late for fantastic fiddle fireworks and accordion acrobatics!”

Thicker Than Thieves will bring its “soulful vocals, searing guitar solos, and a rock-reggae-based rhythm section” to Frog and Peach on Tuesday, Jan. 31. They cite influences ranging from Bad Brains, Bob Marley, The Clash, and classical composers like Dvorak!