It must be an exciting time to be an AT&T shareholder. On one hand, the telecommunications giant is set to acquire competitor T-Mobile. On the other, a new series of fees for the highest of its high-speed Internet consumers--potentially a big moneymaker for the company--are just around the corner.

It’s hard to imagine customers will be as excited. After all, the extent to which these new fees will be a drain on their wallets--and whether other broadband providers will follow suit--remains unclear. 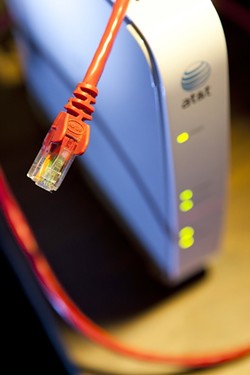 Beginning May 2, AT&T will crack down on its heaviest bandwidth consumers, charging its residential DSL and U-verse subscribers additional fees for exceeding set usage allowances, i.e. how much data you send or receive over the Internet in a month.

Publicly, AT&T says this move will even the field between subscribers who hog a disproportionate amount of bandwidth and the average customer.

One could hypothetically download approximately 50 full-length, high-definition movies for about 150 GB. And while that may seem like more than the average user will ever need, factoring additional service staples such as e-mail, photo sharing, music downloads, and other content, a customer’s bandwidth allowance could dry up relatively quickly.

There are also subscribers who might not realize they could be affected by the caps, such as professionals who continuously upload and back up data to “cloud” networks, as well as shared residences with multiple tenants on one network. Given the new caps, AT&T issued a warning to its customers, advising them to secure or “lock” their wireless network so someone with a Wi-Fi enabled device nearby won’t be able to access it and increase the monthly usage.

Anita Lamont, spokesperson for Charter Communications, the only other high-speed broadband provider in SLO County, told New Times Charter is aware of AT&T’s new bandwidth caps, but currently has no plans in the works to levy similar fees on its customers.

“There have been no talks on that front,” Lamont said.

Hard numbers outlining how many high-speed Internet customers AT&T and Charter serve in SLO County aren’t public, according to a spokesperson for the Federal Communications Commission. However, data compiled by the National Telecommunications and Information Administration indicate that between 70 and 80 percent of households in the county subscribe to a high-speed broadband service.

AT&T says the vast majority of its customers won’t be affected by the new fees. According to AT&T Spokesperson Karla Enriquez, a small slice of its customers--roughly 2 percent--gobble up about 20 percent of its network capacity.

“Our top priority remains our customers’ service experience. That’s what this initiative is all about,” Enriquez wrote in an e-mail to New Times. “As I’m sure you can imagine, we’re witnessing a dramatic increase in bandwidth usage, driven primarily by a small fraction of our customers who are consuming a disproportionately large amount of bandwidth.”

Enriquez said just one of these high-traffic customers use about the same amount of data capacity as 19 typical households.

“Lopsided usage patterns can cause congestion at certain points in the network, which can slow Internet speeds and interfere with other customers’ access to and use of the network,” she added.

Critics of the company say otherwise, however, and have called on AT&T to provide raw data to back up that claim.

Enriquez added that the fees won’t come out of the blue. Those customers likely to exceed their allowance will receive notifications from the provider, she said, when they hit the 65, 90, and 100 percent marks.

AT&T has become the focus of substantial criticism over the past decade for what many see as a lack of pursuit in developing the infrastructure necessary to increase overall bandwidth capabilities—an endeavor that would have made such data caps unnecessary.

“It’s not about usage, its about control,” said Bruce Kushnick, chairman of the customers’ advocacy group, Teletruth, which focuses on telecom and broadband issues. Kushnick has written extensively about the failure of companies such as AT&T to follow through with promises made in the late ’90s to invest in high-capacity fiber-optic networks. In exchange for building these networks, AT&T-owned companies enjoyed changes in state laws that allowed them substantial tax savings and other perks.

Though the money was doled out, the fiber networks were never built on the scale imagined—especially in California.

“What we have here is a situation where they never properly rolled out their products like they were supposed to, and in most [areas] there is no real competition,” Kushnick said. “A dualopoly is not competition, though they will try to argue it is.”

Others raise questions about the reliability of AT&T’s metering of a customer’s data usage. Some industry analysts, including Matt Wood, associate director of the Media Access Project, a nonprofit law firm and advocacy organization focused on communications policy, have called for a standardized, independent metering system.

“What we would prefer to see is some fair way to meter, something akin to the electrical and gas utilities,” Wood told New Times. “Broadband should be open, and the idea of data capping instead of investing in infrastructure is, I think, short-sighted at best.”

Countries that have implemented data caps are already seeing consequnces. In Canada, for example, Netflix has responded to such caps by downgrading to lower-quality, lower bandwidth-intensive streaming videos.

“Until people start screaming, and the senators and lawmakers start taking [telecom companies] to task, we’ll see them doing more of this kind of thing,” Kushnick said. “Because they can.”