The downtown club heats up for the holidaze

There’s a sleigh full of great shows coming up during the next couple of weeks, and seeing as how this is the last music column I’m going to write this year before taking the rest of December off (sweet paid vacation, I salute you!), I’m stoked at all the possibilities for nighttime sonic fun.

First, let’s take a gander at SLO Brew’s lineup. They kick things off with the King of the Surf Guitar on Thursday, Dec. 2, when Dick Dale, with son Jimmy Dale, brings some thundering, bone-shaking rock to the club (6:30 p.m.; 21-and-older; $25). That same night, stick around for Round 2, when the Bunnies & Bikinis Contest takes place (10:30 p.m.; 21-and-older; $5 at the door). Featuring some lovely ladies of the Central Coast, the bikini and skiwear show will be like hitting the surf and snow in the same
day … but with hot babes!

Get your rock, reggae, and dub needs fulfilled on Saturday, Dec. 4, with Tomorrows Bad Seeds with Josh Fichel (7 p.m.; all ages; $12 presale or $13 at the door). They help you rock steady into the holidaze season.

Speaking of daze, on Sunday, Dec. 5, you can witness the spectacle that is D.R.U.G.S. featuring Craig Owens (6 p.m.; all ages; $12 presale or $14 at the door). This hot new group is set to release its debut album on Decaydance/Sire Records in early 2011. You can download “If You Think This Song Is About You, It Probably Is” for free on the band’s Facebook page. By the way, their name stands for “Destroy Rebuild Until God Shows.”

Country, rock, and roots act Reckless Kelly returns to town on Monday, Dec. 6, with the Bob Lawrence Band opening (7 p.m.; 18-and-older; $15 presale or $17 at the door). According to Reckless’ bio, “The album art on Reckless Kelly’s new release, Bulletproof, is a semi-faithful rendition of the homemade armor Australian outlaw and band namesake Ned ‘Reckless’ Kelly wore during his final police shootout.”

MCA recording act the Randy Rogers Band hits SLO Brew on Wednesday, Dec. 8 (8 p.m.; 21-and-older; $16 presale or $18 at the door). Their newest album, Burning the Day, hit stores last summer and was the second most downloaded album on iTunes (all genres), just under pop super star Katy Perry. The album was also No. 2 on Billboard’s Country Albums chart and sold 29,000 units its first week.

Steve Key’s Songwriters at Play shows no sign of slowing down through December. He’ll kick off his songwriter showcase series on Thursday, Dec. 2, at The Porch in Santa Margarita with Gary Garrett and Kate Kilbane playing the featured set. In addition to being a musician, Garrett is a sculptor working in bronze, clay, and multimedia. His songs are sometimes philosophical, often funny stories about life, love gone right and wrong, space travel, the beach, and flying dreams. “If you like David Wilcox, Loudon Wainwright III, Greg Brown, Lyle Lovett, or the Barenaked Ladies, you’ll probably like me,” he said.

Kate Kilbane, a Texas native, now lives in San Francisco. Her latest CD, The Medea Cycle, is a collection of songs from the point of view of the Greek heroine who sacrifices everything for love. The show is all ages and starts at 6:30 p.m., and may feature up to eight other performers playing three-song sets. It’s free, but tips are gladly accepted.

The showcase marches on when the Steynberg Gallery hosts the showcase on Tuesday, Dec. 7, focusing on Joni Mitchell songs and featuring local jazz chanteuse Margie Nelson, who’ll perform “Be Cool,” a Mitchell song from Margie’s new CD Hungry Girl. “We celebrated the music of Joni Mitchell in September at our Morro Bay showcase, and the response was so strong we had to do it again,” said Bonnie Nelson. “Many of the performers from that show return for an encore, including Chick Tuesday, Shannon Savage, Raeme Miner and Johnee Gange, and Kay Ashley. Also performing is Human Nation jazz guitarist Adam Levine. In addition, we will add two Santa Barbarans: Karen Thurber and Tysa Goodrich, also known as Coyoteez (be sure to wish Karen happy birthday).” The all-ages event starts at 6:30 p.m. and costs $5 at the door.

Get your holiday started early

Ready to get into the spirit? Cal Poly Choirs are having an old-fashioned “Christmas Celebration” on Saturday, Dec. 4, at 8 p.m. in Harman Hall of the Performing Arts Center’s Christopher Cohan Center (though they will sneak in a Hanukkah favorite, “S’Vivon”). Hear the Cal Poly vocal ensembles conducted by music professor Thomas Davies. University organist Paul Woodring will be featured on the Forbes Pipe Organ. The Cal Poly Brass Ensemble, conducted by Christopher Woodruff, will perform, and Woodring and Susan Azaret Davies will accompany the choirs. It’ll be Christmas music, mostly, culminating in the biggest tearjerker of them all, Malcolm Sargent’s arrangement of “Silent Night.” Tickets cost $10 for students, $16 and $19 for seniors, or $17 and $20 for general admission (call 756-2787).

Amazing Celtic act Molly’s Revenge and special guest vocalist Moira Smiley will be performing an annual Celtic Christmas Celebration of music, song, and dance at South Bay Community Center in Los Osos on Sunday, Dec. 5, at 4 p.m. The Rosemary Turco Irish Dancers will also appear. Expect Christmas songs both old and new, all given a Celtic twist. Winterdance, a new CD featuring music from the show, will be available for purchase, and 10 percent of the profits will be donated to the ALS Foundation (Lou Gehrig’s disease). Tickets are available online at mollysrevenge.com, at Boo Boo Records, or at the community center.

Cal Poly’s terrific a cappella ensemble Take it SLO presents its second annual Holiday Concert at 2 and 7 p.m. on Sunday, Dec. 5, in Room 218 of the Davidson Music Center on campus. The 15-member vocal ensemble will perform a variety of songs to raise the holiday spirit, plus some new works and old favorites, all arranged by the students, who hail from a variety of majors on campus. Admission at the door is $7 ($5 for students).

Of course there’s a ton more going on this week than what’s happening at SLO Brew and the Songwriters at Play showcases.

Ready for some traditional folk music? If yes, then check out Golden Bough, who performs on Celtic harp, pennywhistle, violin, octave-mandolin, mandolin, accordion, guitar, harmonica, recorder, and bodhran; playing tender ballads, lively jigs, reels, and sing-alongs on Friday, Dec. 3, at 7 p.m. in the Coalesce Bookstore as part of the SLOfolks music series ($20; call 772-2880).

“The creativity and spontaneity of jazz will be on display when the Cal Poly jazz ensembles give their Fall Jazz Concert at 8 p.m. Friday, Dec. 3, in [Cal Poly’s] Spanos Theatre,” according to the Music Department. Two big bands and a jazz combo will perform standards and cutting-edge, contemporary jazz. “The unpredictable is always a part of jazz, and that is one of the fascinating things about it,” said Paul Rinzler, Cal Poly’s director of jazz studies. “The jazz musicians performing have the chance to do something really new and fresh, and they always come through, much to the audience’s delight.” Tickets cost $10 for the public, $8 for senior citizens and Jazz Federation members, and $6 for students (call 756-2787).

On Sunday, Dec. 5, The Famous Jazz Artist Series at the Hamlet in Cambria presents its annual “All Alone” concert featuring the series co-producers Charlie (piano and vibraphone) and Sandi (vocalist) Shoemake, who will perform selections from their many recordings and will converse with the audience about their careers and the current jazz scene—one show only at 4 p.m., for $15. Call 927-0567 to reserve tickets.

Living Room, an Austria-based hang drum and bass clarinet duo, plays the Steynberg Gallery on Sunday, Dec. 5at 7:30 p.m. ($10). What’s a “hang drum,” you ask? The Switzerland-made instrument is rare, and Living Room’s Manu Delago is its most famous adherent, with YouTube videos that have garnered more than two million hits. The duo will do a radio interview with Sonnie Brown at KCBX on Saturday, Dec 4, at 3 p.m.

Australia’s hottest export, Thunder From Down Under, which was named AOL’s Best Adult Attraction in Las Vegas for the third year in a row, is heading to The Ranch in San Miguel on Tuesday, Dec. 7. The show is “sexy yet clean hot Aussie fun straight from Down Under,” according to press materials. “This All-Australian dancer troupe [is] handsome with rippled washboard abs and red-hot bodies.” This is an 18-and-older event. Visit liveattheranch.com for ticket info. 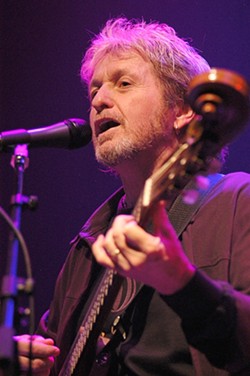 Central Coast resident and rock legend Jon Anderson, the voice behind ’70s supergroup YES, will play a solo acoustic concert on Wednesday, Dec. 8, at 7:30 p.m. in Cal Poly’s Alex and Faye Spanos Theatre. “During this special-added Center Stage event, concertgoers will discover that Anderson is also an accomplished solo artist and composer; his acoustic show will include many classic songs from throughout the YES songbook, as well as his original eclectic work,” said Cal Poly Arts. Student and adult tickets are $38, available at 756-2787.

Sayonara, readers! See you next year!