If making music is a subversive act, then Rebelution is, as their name suggests, both revolutionary and rebellious. Check out these lyrics from “Feeling Alright”: See, we can still sit in a distant haze and watch rain clouds pour thoughts of greatness and help our troubles sail far away/Well, it’s a struggle—every day we’re stressing, but what’s a life without dedication?/I’m trying to pick up the soul’s intention to soak in music relaxation. 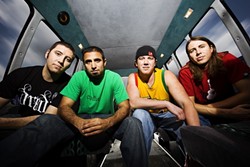 Reggae has, from its inception, been about overcoming adversity, striving for peace, shining light on dark deeds, fomenting unity—and in capitalistic, individualistic, aggressive America, the message is as subversive as can be: relax, be good to one another, do the right thing.

“It definitely went to the next level when we, literally, had thousands of people watching us perform in Isla Vista on Friday nights,” Rachmany explained in press materials.

In June 2007, when they released their first full length album Courage to Grow, they had a major commercial breakthrough with radio play on San Diego’s 91X, Los Angeles’ KROQ, and San Francisco’s Live 105. Then iTunes Editor’s Choice awarded their recording Best Reggae Album of 2007.

Now they have a huge following of happy listeners who soak up the band’s socially conscious, positive message. As Rachmany said, “I think everybody who really feels our music also feels like they are part of a community, and that is something really special to us.”

Catch the Rebelution feeling on Saturday, March 16, at the Alex Madonna Expo Center (doors at 7:30 p.m.; all ages; $25 presale or $30 at the door), with J Boog and Hot Rain opening. This show is brought to you by SLO Brew, and while we’re on the topic, the club will be host to some other hot shows this week as well.

On Thursday, March 14, check out The Story So Far (doors at 6:30 p.m.; all ages; $15), a Bay Area pop punk act that’s developing a rabid following with its melodic hardcore sound. Man Overboard, a pop-punk quintet from the South Jersey/Philly area, will open.

The country-rock singer-songwriter has a classic country back story: He was born Earle R. Ely on Feb. 9, 1947, in Amarillo, Texas; his family worked for the Rock Island Line railroad dating back to the start of the century. At 12, his family moved to Lubbock, where his father ran a used clothing store. After seeing Jerry Lee Lewis, Ely aspired to a musical career, and he briefly took violin and steel guitar lessons before turning to the guitar. When his father passed when he was 14, his mother was institutionalized for a year due to the trauma. I could go on, but you get the idea. Ely is the real deal and has loads of life experience upon which to draw. Joe Pug and our own Joe Koenig will open the show. Three Joes for the price of one!

Old school hardcore punk act Good Riddance hits the Brew on Saturday, March 16 (doors at 7 p.m.; all ages; $15). The Santa Cruz band formed in the early 1990s, growing out of the vibrant surfing and skateboarding culture and influenced by such bands as Black Flag, The Adolescents, TSOL, and Bad Religion.

On Sunday, March 17, get ready to rock when High Voltage—A Tribute to AC/DC returns to the club (doors at 7 p.m.; 21-and-older; $5 at the door). They have a new singer, and all the reports I’ve been hearing is that they sound awesome. Get your green beer on!

I’m digging the high lonesome sound of The Railflowers, a quartet of three sisters and a fourth gal, who create lovely Americana sounds featuring guitar, banjo, mandolin, and lush three-part vocal harmonies. Their album, Lament to Death, is a folk revivalist’s dream!

The three sisters—Hannah, Ellen, and Beth Knight—got their start singing in church up in Chico. Soon they took their act to Madrid, and when they returned in 2010, they added bassist Emma Blankenship and the quartet was complete.

They were awarded Best Female Vocalists by the Chico News & Review, and you’ll be hard pressed to find a more beautiful set of voices. They play Wednesday, March 20, at 8:30 p.m. in Frog and Peach for a free show and again for a sit down concert at Steynberg Gallery on Thursday, March 21, at 7 p.m. for $10. If you go to Frog, I’ll bet you’ll want to see them again the next night. This is gorgeous music!

Kiki Ebsen of the Christopher Cross Band returns to the SLO Down Pub on Thursday, March 14 (6:30 p.m.; all ages; free). Based in the Southern California town of Agoura Hills, she’s an accomplished singer-songwriter but has also backed up Christopher Cross, Wilson Phillips, Boz Scaggs, Tracy Chapman, and many more. Special guests include Mark Davis, Pi Jacobs, and Skydrea Hull.

Don’t forget that Thursday, March 14, The HayDudes play Shine Café in Morro Bay for a $25 concert and dinner package. I’m not sure if there are any tickets left at this point, but it won’t hurt to call 771-8344 if you want to see this incredible bluegrass and beyond trio!

Dead Shot Outlaws, a danceable rock cover band from North County, plays McLintocks in Arroyo Grande on Friday, March 15. They’re pretty big up there, but they’re trying to grow their fan base in the south, so check them out.

Can’t take off from work to go to Hawaii? Here’s the next best thing. Head to Cal Poly’s Spanos Theatre and check out Willie Kahaiali`i (aka Willie K), who was raised on Maui and has entertained audiences since the age of 10. The eclectic and charismatic singer, songwriter, entertainer, and actor performs a wide range of styles: Hawaiian, jazz, blues, reggae, rock, country western, and even opera! Soak up the tropical vibe on Friday, March 15, at 8 p.m. with special guests The Kalama Brothers. Student and adult tickets range from $38 to $44 (756-4849 or order online at calpolyarts.org).

I was just up at Pappy McGregor’s on Monterey Street, and there were some busy beavers in there constructing a new stage, which is great news for the local music scene since SLO has been pared down to three consistent live music venues: SLO Brew, Frog and Peach, and Linnaea’s Café. On Friday and Saturday, March 15 and 16, the stage will see its first performers in the Mighty Croon Dogs. Come out and support SLO’s newest live music venue!

“Young Ireland has been laying low since August, writing music and plotting the next leg of this adventure,” wrote Patrick O’Hara, who makes up the Celtic duo with his son Michael. “We’re headed out on a four-date St. Patrick’s tour that includes one local date in Cambria on Saturday, March 16, at 7 p.m. in the Pewter Plough Playhouse. At our show, we’ll be joined by fiddler Paul Oyler who is new to the area, but not new to music—a wonderful addition for us.” Tickets are $15, available through brownpapertickets.com, at the door, or by calling 801-2988. You can also hear them when they play live around 3:30 p.m. on Saturday on Sonnie Brown’s Song Town on KCBX 90.1FM, which starts at 2 p.m.

Every once in a while I hear from Bob of Bob and Wendy. “We recently met two wonderful musicians who have just moved to SLO,” he wrote me. “They are Karoline Hausted and Mark Davis. They’ll be joining us at my birthday gig at Steynberg Gallery on Saturday, March 16, at 8 p.m.” Look, if Bob says these two are alright, they’re alright! I checked them out online, and, well, color me charmed. Hausted’s song “Alarm” is amazing and otherworldly. Davis also crafts excellent Americana songs. Welcome to the neighborhood!

Cal Poly’s Arab Music Ensemble will be joined by three acclaimed guest artists: Egyptian master violinist Adel Iskander Guirguis, distinguished Assyrian qanun player Ishmael, and Near Eastern percussion specialist David Martinelli. See them on Saturday, March 16, at 8 p.m., in the Spanos Theatre when they present old and new vocal and instrumental selections by some of the most celebrated composers and performers from the Ottoman era to the present day. Tickets are $12 for the public and $9 for senior citizens and students (756-4849).

On Sunday, March 17, Ron Stout, a legendary trumpet soloist with Woody Herman and Stan Kenton, makes a rare West Coast appearance at the Famous Jazz Artist Series at the D’Anbino Wine Tasting Room. Stout, now a renowned jazz educator, will be joined by bassist Dylan Johnson and drummer Paul Kreibich. Series co-producers Charlie and Sandi Shoemake will also appear. There’s a 4 and 7:15 p.m. show, each for $15, or see both for $20. Call 927-0567 for reservations.

On Sunday, March 17, retro-inspired folk-rock band Musical Charis plays a free St. Patrick’s Day show from 5 to 8 p.m. in the SLO Down Pub. If you’re a fan of Fleetwood Mac and the Mamas and the Papas, you’ll dig these folks, who claim their “live show is like slamming Pop Rocks while cuddling up with your favorite Dr. Seuss book; you feel warm and nostalgic, yet excited all at the same time.”

Disney’s Beauty and the Beast, an award-winning Broadway musical, plays a two-night run at the Performing Arts Center at 7:30 p.m. on Tuesday and Wednesday, March 19 and 20. There will be a free pre-show lecture led by Cal Poly Theatre and Dance Department professor Virginia Anderson, beginning at 6:30 p.m. each show night in the PAC Pavilion. Student and adult tickets for the performance range from $47 to $84 (756-4849 or order online at calpolyarts.org).

Thomsen & Frechette play Upper Crust Trattoria on Monday, March 18 (6:30 p.m.; all ages; free). One is a classically trained violinist and the other a prolific Canadian singer-songwriter. They met on the Internet. Dan Frechette has recorded 13 solo albums. Laurel Thomsen performs and records across a variety of genres, with ensembles ranging from orchestras to singer-songwriters and tribute bands. Special guests include Devin Welsh, Cynthia Hathaway, Derek Senn, Curtis Marsh, and a duo called Panga.