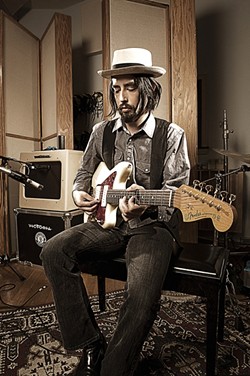 Jackie Greene has “rock star” written all over him … with Sharpie, when he passed out at a party this one time. Just kidding. Rock star is written all over him metaphorically, from his impossible skinniness to his droopy doe eyes to his laconic dis-affectation to his moppish hair and his chain-smoking ways.

The self-made musician clawed his way up from the bottom, but with terrific self-produced and -released albums, a strong work ethic, and some strategic moves as he hopped from Sacramento’s DIG Music to Verve Forecast and finally to 429 Records. He’s become a music tour de force, sharing the stage with the likes of B.B. King, Phil Lesh, Huey Lewis, Susan Tedeschi, Taj Mahal, and Buddy Guy. A few years ago he also became a member of Phil Lesh and Friends, the Grateful Dead bassist’s ensemble dedicated to the interpretation of the Dead’s extensive songbook.

The Brew also hosts reggae and hip-hop act Chiller Whales during its CD release party on Saturday, Feb. 12 (7:30 p.m.; all ages; $7 presale or $9 at the door), with Bare Feet opening.

“We’re all buds from Cal Poly that started jamming together late night after typical Cali shenanigans,” wrote the band. “We started writing music and practiced in an old crappy shed that had more holes than roof that we dubbed ‘The Jamquarium.’ Luckily, Chiller Whales have left the shed and moved on to bigger and better things, sharing the stage with the likes of Tomorrows Bad Seeds, Nada Rasta, Bare Feet, Jah Sun, Tippa Irie, and more.” 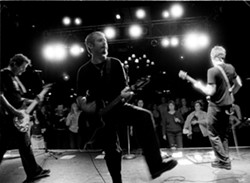 Celtic rockers The Young Dubliners have been busy in the studio, but they’re ready to take a short break and road test some of the new material on Thursday, Feb. 10, at Rooney’s Irish Pub (241 S. Broadway, in Orcutt). A short tour will lead up to their annual St. Patty’s Day performance at the Shamrock Festival in San Diego.

“The way America celebrates St. Paddy’s Day and the days leading up to it is like nowhere else on Earth,” said Irish-born front man Keith Roberts, who now calls SLO County home. “It would be blasphemy not to be on the road at this time of the year.”

The Dubs’ last record, Saints and Sinners, was packed with raucous party anthems that blended their Celtic rock with American sensibilities. Expect a night of good cheer. 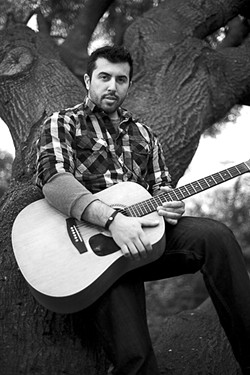 The former SLO resident now makes the Bay Area his home, where he’s “established a buzz in the California music scene after performances at music venues, radio, and events around the state,” said his bio.

While a student at Poly, he worked for three years as the ASI Musical Entertainment Supervisor, booking more than 100 concerts, but music was in his blood long before his Poly days: “I’ve come a long way over the years and continue to learn what it means to be a musician every single day. I’m happy to be able to do what I love most, and I am excited to share my music!”

Annuzzi was recently honored with San Francisco’s Song of the Year, and has been featured on the San Francisco Bay Area’s Channel 92.3FM, San Luis Obispo’s Coast 101.3FM, and KCPR 91.3FM. Check out this rising star. 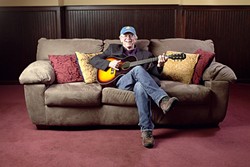 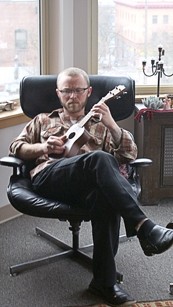 Decker headlines Key’s showcases on Tuesday, Feb. 15, at the Steynberg Gallery (6:30 p.m.; all ages; $5) and again at The Porch on Thursday, Feb. 17 (6:30 p.m.; all ages; free). The Sedona-based singer-songwriter (born Brandon Decker) sings songs that “delve into the human heart and the human condition. Not quite rock, not quite folk, his acoustic-based music draws upon a variety of influences from Leonard Cohen to Tom Waits, from Cat Power to PJ Harvey,” according to a press release.

Local musicians have gathered forces to host a fundraising concert for the Sharing a Dream Foundation on Saturday, Feb. 12, from 2 p.m. to midnight in Los Osos’ South Bay Community Center. Billed as the Lucky 13 Music Fest, organizers have claimed to gather “13 of the Best Musical Acts Ever in One Place.”

Great food and cocktails will be available throughout the day. Tickets ($25) are available at Cheap Thrills Records.

For the third year in a row, the SLO Down Pub has your romantic needs covered with a Beatles love-fest on Saturday, Feb. 12, right before Valentine’s Day. The California Blues Band (formerly known as the Jim Townsend Blues Band) is proud to host a night of all Beatles music, featuring more than 20 artists, including three bands. You’ll hear more than 50 Beatles songs, back to back, with sing-a-long booklets supplied for those who want to join in.

According to promoters, “Of special note this year is the addition of the youth band, the RKdians. This band is comprised of nine kids, ages 9 to 13, who just recently performed in the Grover Beach Christmas parade, garnering a first place trophy. Also joining in will be local favorites RF8 and Whiskey Shakes.”

The California Blues Band will host and back up numerous singers, many returning and some appearing for the first time as they cover Beatles songs of all types and styles. The show costs $5 and starts at 7 p.m. sharp.

On Thursday, Feb. 10, award-winning multi-instrumentalist, songwriter, and music historian Lil’ Rev will play the Steynberg Gallery at 7:30 p.m. “Known as a ‘protector of old songs, poetry, and stories,’ Rev has been called a ‘Wisconsin treasure,’” according to his bio. “His many awards and frequent travels have garnered him a loyal and growing fan base amongst lovers of all things ukulele, folk, old time, harmonica, Jewish music and culture, American labor history, and respect for our elders!” He calls his style “edu-tain-ment,” a combination of songs, history, stories, poems, quotes, and jokes “all wrapped up in a cloak of exuberance and gratitude for those moments when we can all come together and rise up singing … and celebrate life!” 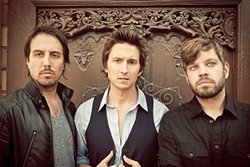 The Northstar Session, which will be releasing its newest album Late Bloomer this April, returns to the area for two shows: Friday, Feb. 11, from 3 to 6 p.m. at The Cliffs, and Saturday, Feb. 12, from 8 to 11 p.m. at The Pour House. Fans of Wilco will dig this band, which just made an appearance on NBC’s Parenthood. 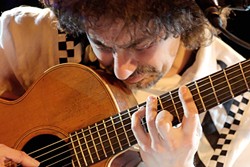 Frequently hailed as the Best World Music Guitar Player, Pierre Bensusan is the next performer at SLOfolks concerts: Friday, Feb. 11, at Coalesce Bookstore (772-2880), 7 p.m.; and Saturday, Feb. 12, at Castoro Cellars (238-0725), 7:30 p.m. Bensusan is the USA 2008 Guitar Player Magazine Readers Choice Award winner, whom George Winston calls “One of the truly gifted musicians of our time—he plays the guitar as if it were the very soul of himself.” Tickets to his shows are $20, available at the venues. Sonnie Brown will interview Bensusan on Song Town, KCBX 90.1FM, on Feb. 12 after 2:30 p.m. Bensusan will also offer guitar lessons from 10 a.m. to noon at Coalesce, limited to six students at $300 per student, which includes a ticket to one of his shows, a set of his custom signature Wyres Strings, a tour T-shirt, TABs/sheet music, and time to chat and take photos. To book your VIP Guitar Lesson or request further details, e-mail Marie Kutch at mkutch@aol.com or call (516) 674-9686.

Meet SLO County’s newest addition: Stephen McAndrew, a new arrival from the East Coast, will present the music from the Great American Songbook with friends Judy Philbin, Rick Jarrett from Los Angeles, and Kimberly Ford from Santa Barbara on Saturday, Feb. 12, at Unity Hall (1490 Southwood Drive, SLO) from 7 to 9:30 p.m. Hear songs by George Gershwin, Cole Porter, Antonio Carlos Jobim, and other great composers. McAndrew will also be premiering a soon-to-be-nationally released tribute to Frank Sinatra. Free wine and refreshments will be provided. Buy advanced tickets ($12) online at stephenmcandrew.com, or pay $15 at the door.

Dive in to Diva Nation on Saturday, Feb. 12, at 8 p.m. in the Clark Center (489-9444). “Join the Four Bitchin’ Babes for a hilarious musical journey as they navigate life in the nation ... Diva Nation,” said a press release. “With their whimsical, hip, and sophisticated girl-group harmonies, these hysterically funny and multi-talented musicians let loose on how the new millennium has, in some cases literally, changed the face of The Diva! You can find her everywhere—in your office, your mall, your grocery store. She’s cleaning up messes and putting out fires, possibly from her own hot flashes! This show celebrates The Diva in us all. Let your sense of humor be your ticket to a magical place where chocolate is a vegetable, wine is in the food pyramid, shopping for shoes is medicinal, and a girl can safely admit that she wears 100-percent cotton underneath it all! Take this enchanting excursion to Diva Nation, where all songs are sung with pride, attitude, and terrific accessories!” 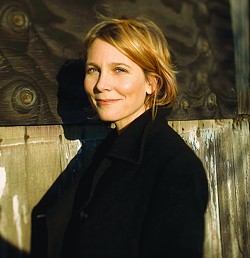 Sunday, Feb. 13, marks the beginning of the San Luis Obispo Botanical Garden’s 2011 concert series, which will provide audiences with a variety of musical genres from jazz, country, blues, rock ’n’ roll, and pop. Jazz chanteuse Inga Swearingen kicks off the series with a 4 p.m. concert, performing originals from her most recent CD, First Rain. She’ll be joined by Jeff Miley on guitar, Dylan Johnson on stand-up bass, Darrell Voss on percussion, and Inga’s sister Britta on vocal harmonies. Inga also plans to sing an Annie Lennox cover while accompanying herself on a National-Resophonic Guitar. She’ll also perform a traditional Swedish melody as a blues tune. Seating is very limited; call 541-1400, Ext. 304 to reserve your tickets ($18 members; $20 non-members). Upcoming concerts include The Sherry Austin Band (April 10); The Mystery Trees, featuring Dorian Michael and Kenny Blackwell (Aug. 7); and Joe Craven Oct. 9). Arrive at 3 p.m. for a docent-led tour of the gardens.

“Here’s a chance to do something good for you, your sweetie, and the Cambria Library,” wrote Billy Foppiano. “They have quite a way to go on their fundraising, but this’ll get us going! With the theme of ‘What’s Black, White, and Read All Over?’ the Friends of the Cambria Library is hosting the its Eighth Occasional Valentine’s Day Dance and Chocolate Tasting, on Monday, Feb. 14, from 6:30 to 9:30 p.m. at the Library. Cambria sweethearts will sample chocolate delights, dance to live music, and support our new library. Led by intrepid cooks Alese Bell and Becky Kincaid, local volunteers are whipping up their own special sweet treats. We, Billy Foppiano and the Mighty Croon Dogs, are laying down the tunes.” This costs $15 at the door.

Alt-folkies Jennie Wayne and Peter Murray from the Portland band John Heart Jackie will play Steynberg Gallery on Wednesday, Feb. 15 (7 p.m.; all ages). “We released our debut album, We Are Gold Mounds, in August, and we were just featured as NPR Song of the Day,” said the duo.

Normandie Wilson will be playing lounge, indie pop, and soul at Linnaea’s Cafe on Wednesday, Feb. 16, at 8 p.m. The San Diego-based musician is a “musician and painter from West Virginia,” said her bio. “She grew up listening to 1960s music (Burt Bacharach, the Beach Boys, Motown) and watching birds with her grandma. She delights in playing as many different instruments as possible, usually sticking with piano, percussion, and trumpet.”