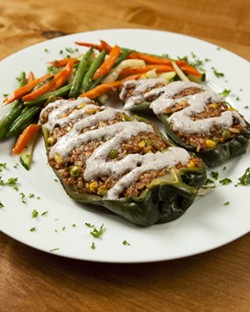 Count me among the loudest complainers when it comes to Mexican cuisine in SLO County. Most of the restaurants are cheap, and that’s the problem: so is the food. You’re served bland rice, vapid beans that provide only gas, and leathery meats, but that’s typical of many Mexican restaurants, not just here.

That’s why I was excited when friends who love Mexican cuisine like I do recommended the Wild Donkey Café for its fresh, delicious foods.

I ran right over to see for myself, of course, and was happy to find the food quite impressive. It was reminiscent of the meals I enjoyed at the taquerias I frequented in San Francisco’s Mission District. Actually, compared to some of them, the food was much better on Wild Donkey’s unusual menu. That’s because of the talented chef and owner, George Kartsioukas. You’re right if you recognized that his name is Greek, and he’s cooking Mexican cuisine that’s everything I’ve been hoping for and more.

My favorite dish (so far) is “fajitas donkey style.” I chose lamb from the meat offerings that also included New York strip, chicken, pork, or tofu ($12.50 to $13.95 depending on the chosen meat). It appears to be typical Tex-Mex style, but the donkey version has subtle touches that make it really tasty. Rather than a simple stir-fry of meat, onions, and bell peppers, Kartsioukas adds garlic and julienned carrots and zucchini. It’s served with chunky guacamole, sour cream, black beans, and Spanish rice, each side dish so deliciously made, they stand alone. That’s the mark of a great chef—nothing should be placed on the plate that isn’t delicious to eat, and that includes garnishes.

“They had me doing things you’d do on a computer now, and I hated it,” Kay recalled. “I quit and went to the Haystack to ask for a job.”

A few years later, they opened their own place in San Francisco’s Cole Valley: Bambino’s Ristorante. Located across from Tassajara Bakery on Cole Street, the Kartsioukases specialized in Italian and Greek dishes. (They’ve since sold it, but it remains open under that name.)

“Greek food wasn’t that well known then,” Kay remembered of their first years in business, “so we mostly offered Italian cuisine with Greek specials.”

The couple debated whether they wanted to recreate that cuisine here, but found that SLO already had many Italian restaurants.

While growing up, Kay’s family lived in the Greek community in Noe Valley, near the Mission District, so many of her friends were Mexican. She explained that they frequently dined at each other’s homes, so she gained an appreciation for Mexican cuisine. That’s how they came to offer a menu with both Greek and Mexican specialties. I didn’t consider it fusion, even though I chose lamb fajitas.

Wild Donkey is located in the former Tio Alberto’s on Broad Street, but the Kartsioukases couldn’t just move in and open. The building required retrofitting, a new stainless steel kitchen, windows, and doors. Kay said they completely remodeled the dining room and stripped the tar off to expose the old brick walls and wooden beams. The finished restaurant is as colorful as its cuisine, decorated with Kay and their daughter Cristina’s original art. Kay also decorated it with wonderful Mexican art. Their paintings of wild donkeys inspired the restaurant’s name.

“We like the fact that everyone coming in to eat seems to know each other, and they go over to each other’s tables,” Kay said.

The reasonably priced menu offers generously sized dishes like the delicious taco salad (with different meat options, ranging from $8.95 to $10.95), served in a crispy tortilla bowl with fresh greens, black beans, shredded cheddar and jack cheeses, black olives, salsa, guacamole, and sour cream. I enjoyed the gyro, a large pita with lamb, red onions, lettuce, tomato, and tzatziki sauce ($8.50), with a side of tangy peasant potatoes ($1.50). The chef finished by noting: “We keep our prices low so you can eat here every day of the week and not spend too much money.”

You can reach New Times Cuisine columnist at khardesty@newtimesslo.com.