By Karen Garcia and Caleb Wiseblood

Director Sharon Maguire (Bridget Jones's Diary) takes the audience on a lighthearted and comedic journey with Eleanor Fay Bloomingbottom (Jillian Bell, Workaholics, Brittany Runs a Marathon), an untrained fairy godmother who ventures into the human world to prove she's got what it takes to answer the call of a girl whose request for help was left unanswered. (113 min.) 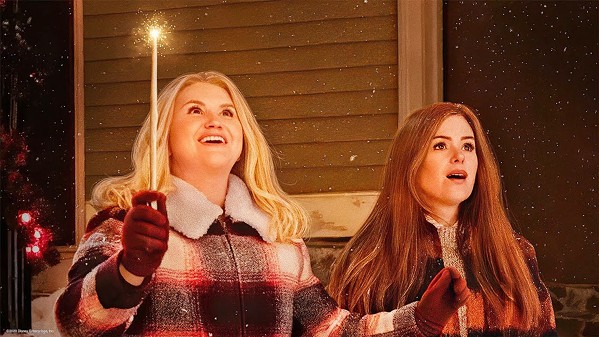 Caleb In a magical realm known as Motherland, fairy-godmothers-in-training hone their craft in an academic setting reminiscent of Hogwarts, minus the teen angst and, well, all things youthful really. The school's students and faculty are solely composed of elderly women, with one exception, Eleanor Fay Bloomingbottom (Bell), who appears to be in her mid-30s (at least from a human perspective—who knows how old she is in fairy years). As the youngest of the fairies, Bloomingbottom (whose surname I will not tire of) is an outlier who embodies becoming a fish out of water during her first visit to Earth, where she sets out to find a 10-year-old girl named Mackenzie Walsh. After reading a wishful letter from Walsh, Bloomingbottom is determined to make all of her dreams come true by granting her a "happily ever after." But she's a few decades late, as Walsh is a middle-aged, single mother by the time Bloomingbottom arrives. Recently widowed, Walsh (Isla Fisher, Confessions of a Shopaholic) and her two daughters live in Boston, Massachusetts, where she works as a reporter for a local television station. Bloomingbottom shows up at the station to convince Walsh that she's her fairy godmother in front of her co-workers during an awkward scene that echoes Buddy the Elf meeting his father for the first time ("I love you, I love you, I love you!").

Karen It's a hodgepodge modern-day fairy tale until Bloomingbottom realizes that happily ever after isn't so black and white. She quickly realizes Walsh might not need a knight in shining armor but a touch of positivity and to be intertwined back into her girls' lives. But nevertheless, as the dried-out saying goes, she persisted—and I mean that in a positive way. Bloomingbottom doesn't let go of her positive spirit and will not give up on her assignment. This fairy godmother has a dual mission: help Walsh and save The Motherland. Sadly, Bloomingbottom is in a dying industry slated to become a Tooth Fairy enterprise because humans don't believe in happily ever after (Gee, I wonder what would make us so cynical?). Seeing her interact with humans and deliver fish-out-of-water jokes is top notch and had me belly laughing. In almost every scene, you know that Bloomingbottom is going to get into some kind of mischief while trying to help the Walsh family. That being said, the story doesn't do anything new. In fact, it's following the footsteps of many Disney films, where several storylines somehow mesh together in one.

Caleb It's in the same vein of films like Enchanted and A Simple Wish (I wish Martin Short was my fairy godfather). And while I agree Godmothered doesn't bring much new to the table, it's still fun to see these actors take on the genre. Bell is never not funny as Bloomingbottom. Her childlike, but often hazardous, optimism in the face of one disaster after another reminded me of her role as wide-eyed Jillian Belk in Workaholics. In one scene, Bloomingbottom attempts to transform a pumpkin into a carriage, a la Cinderella, but ends up destroying the entire patch. You can easily imagine Bell's Belk coming to the same conclusion as her Bloomingbottom does: Well, let's try watermelons instead! And it's that level of perseverance that makes her occasional angry outbursts all the more effective ("Mother of fudge!"). My favorite character by far though is one of her Motherland mentors, Agnes, played by the always wonderful June Squibb (Nebraska, About Schmidt). Agnes is basically Bloomingbottom's guide throughout the film as she pops in from time to time to offer some godmotherly advice. Their convos are usually via "FaceTime," but not our version of FaceTime, as Agnes's head magically appears inside of an old, wooden clock (Droid users can relate).

Karen What I appreciated most from writers Melissa Stack and Kari Granlund is that they rewrote the fairy tale formula of needing a prince to have a "happy ending." Of course Walsh has a love interest, her colleague at the news station, but it's not a primary goal for her or Bloomingbottom. Time and time again, these modern-day fairy tales end with a couple coming together in love. It's a lovely thought, but finding happiness in family, friends, and work is more of a life lesson. So take the time to enjoy the loved ones in your home by curling up on the couch, sharing a large bowl of popcorn, and laughing together at Bloomingbottom's magical journey. Δ