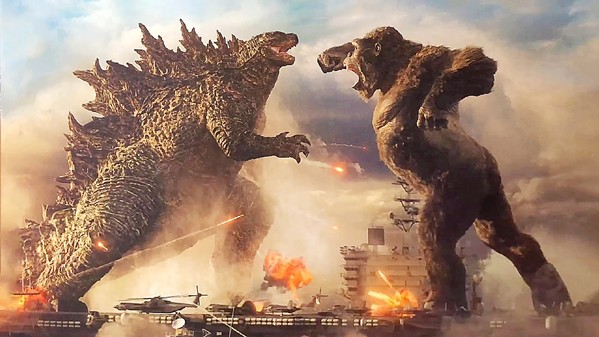 Adam Wingard directs this creature feature about the mighty King Kong squaring off against fearsome Godzilla. It's loud. It's dumb. It's pure fantasy. If you're watching this film for the human characters, prepare to be disappointed, but if you're here for an epic throw down between two titans, you might have a bit of fun.

The film takes up nearly five decades after we last saw Kong in Kong: Skull Island (2017), and it's been five years since Godzilla defeated King Ghidorah in Godzilla: King of the Monsters (2019). Kong is being monitored inside a giant dome—he's none too happy about it, but he communicates via sign language with Jia (Kaylee Hottle), the last Iwi native of Skull Island, or some such nonsense. It doesn't really matter. We're just waiting for Kong to go toe to clawed toe with Godzilla, who's just attacked some facility.

Then there's more nonsense about Hollow Earth, which—the theory goes—is the realm of the titans, and Skull Island is the place where Hollow Earth pushed up to the surface. If this sounds ridiculous, it's because it is, but the fight sequences and mayhem are impressive. This probably would have been better to see on the big screen, but it was released on HBO Max the same day it arrived in theaters, so I watched from home. It was thankfully pretty short at less than two hours. (113 min.) Δ