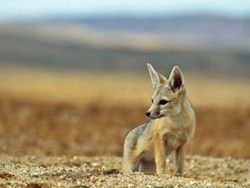 We are facing twin crises of climate and extinction.

The planet has seen a 60 percent decline in wildlife over the past 40 years. In the U.S., we are losing one million acres of natural habitat to development every year. Of the millions of acres of public land under the purview of the Bureau of Land Management, 14 percent are protected. More than 80 percent are at the mercy of the oil and gas industry.

But there are other numbers, numbers crunched by the UN International Convention on Biodiversity and leading conservation scientists, and those numbers say that we can turn back the crises of extinction and climate by conserving 50 percent of the planet by 2050.

In the U.S., that means protecting 30 percent of our remaining lands and waters by 2030. Increasing the levels of protection and conservation for public lands currently managed by the Bureau of Land Management, U.S. Fish & Wildlife Service, Department of Defense, Forest Service, state and local government lands, private land, and natural areas would yield that crucial 30 percent. The means to do so include designations of national monuments, wilderness, and roadless forested lands; a moratorium on oil and gas leasing; executive orders; and local land use planning.

Before the 2020 election (when there were other pressing matters at hand), I briefly mentioned the 30 by 30 conservation agenda in this space ("Can you live without wild things?" Oct. 15) as a ray of hope amid the environmental destruction wrought by the Trump administration, writing that "on Oct. 7, Gov. Gavin Newsom signed Executive Order N-82-20, committing the state of California to protecting 30 percent of California's lands and waters by 2030 to curb the loss of species and the destruction of ecosystems. California is the first state in the nation to pledge to conserve 30 percent of its land and waters by 2030, joining 38 countries in that commitment to conservation."

Saving threatened wildlife by protecting public lands means stemming the tide of destruction that has cost us 60 percent of the planet's wildlife and is consuming a million acres a year. It's about keeping fossil fuels in the ground, greatly aiding the shift to a clean energy economy. It's about building a movement at the local, state, and federal levels, partnering with indigenous and frontline communities. It's about generating the political will, visionary policies, and legislation to permanently protect the highest value landscapes to insure the survival of the greatest number of species.

To achieve that goal, the Sierra Club is focusing on four strategies:

• Support the conservation and stewardship vision and priorities of tribal nations.

Few countries on Earth have retained as much wilderness-quality land as the United States. And according to a 2018 study, "the mitigation potential of conservation, restoration, and improved management in forests, grasslands, agricultural lands, and wetlands"—natural climate solutions—could cut U.S. carbon emissions by 21 percent.

In 2002, legendary biologist E.O. Wilson published The Future of Life, in which he wrote: "The biosphere creates our special world anew every day, every minute, and holds it in a unique, shimmering, physical disequilibrium. ... When we destroy ecosystems and extinguish species, we degrade the greatest heritage the planet has to offer and thereby threaten our own existence."

He was right. That's why, for the next 10 years, with a special emphasis on the first hundred days of the Biden administration, the Sierra Club will engage all our networks nationwide to push for a 30 percent by 2030 conservation vision. Δ

Andrew Christie is the director of the Santa Lucia Chapter of the Sierra Club. Send a response for publication to letters@newtimesslo.com.