Art is, among myriad other things, a conversation—sometimes between two people who have never met. Such was the case, at least, for Cambria’s Gail Lapins and Bay Area-based Jenny E. Balisle, who, at the request of curator Ruta Saliklis, worked in isolation from one another on the joint exhibit “Paths Intersected,” which currently hangs at the San Luis Obispo Museum of Art. 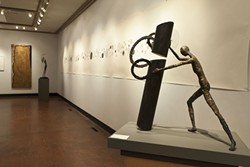 Lapins’ is the language of the figure, whether expressed in acrylic paintings (not represented in “Paths Intersected”) or through her alternatively delicate and imposing bronze sculptures. Balisle speaks in geometry: Her simple ink drawings appear abstract, clear-cut visions of nothing in particular, as if conjured by an architect of dreams. Balisle’s acrylic sculptures, expertly placed to cast intriguing shadows on the wall, are like three-dimensional incarnations of those ideas. Balisle also does large-scale abstract oil paintings so heavily layered they can take more than two years to dry. (In fact, Balisle writes in an artist’s statement that she engages drawing and sculpture not only to exercise other parts of the brain, but to give her something to do while waiting for her paintings to cure.)

It’s a testament to the success of “Paths Intersected” that determining which piece came from which mind isn’t always easy. Balisle’s fractal-like circular designs interact nicely with the repeated circular motifs present in Lapins’ sculptures. For the Cambria sculptor, the circles signify wholeness, she writes, though perhaps they also point to life’s never-ceasing rhythms. In Balisle’s case, the circles seem more like the result of a complex mathematical calculation. The layered patina of Lapins’ sculptures is echoed, too, in the texture of Balisle’s paintings. 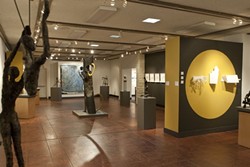 It may be facile—or simply lazy—to compare Lapins’ androgynous bronze figures to those of Swiss artist Alberto Giacometti, yet the similarities are undeniable. But where his elongated beings seemed emaciated, traumatized, and hopeless, Lapins is significantly more optimistic. Her figures may struggle, as in the powerful Strength of Vulnerability. They may find themselves haunted, as in Presence of the Past, in which a lone figure appears confined within an unyielding circle. But they don’t appear ready to break. Often, as in From the Earth, they seem to overcome, pulling themselves up from nothing, assuming form from abstraction, willing themselves into being.

“Paths Intersected” also seems to represent an ongoing upping of the ante in terms of the museum’s presentation—beginning, maybe, with last September’s “A Time and a Place,” another exhibit to juxtapose the work of two artists, while also drastically altering the space. The curatorial choices made in “A Time and a Place” were meant to conjure the different settings in which the pieces were created; here, those choices seem to playfully draw a common thread through the works of two artists. Great golden and black circles, painted onto the walls, embrace Balisle’s white sculptures, making them, to use a word favored by interior designers and makeup artists, pop.

The joy of both artists’ sculptures lies also in their ability to tell a different story depending on where you stand. The rising figure in Lapins’ From the Earth looks from one side like little more than a mound of coal, and Balisle’s structures, too, often change with the viewer’s angle. Seemingly chaotic pieces align themselves into geometric designs. A piece resembling a simple rectangle when viewed straight-on seems to bloom like a hard-edged flower when approached from one side, as if to say that all along, it had a secret plan.

Arts Editor Anna Weltner has a secret plan, too. She won’t tell, even if you ask her nicely at aweltner@newtimesslo.com.