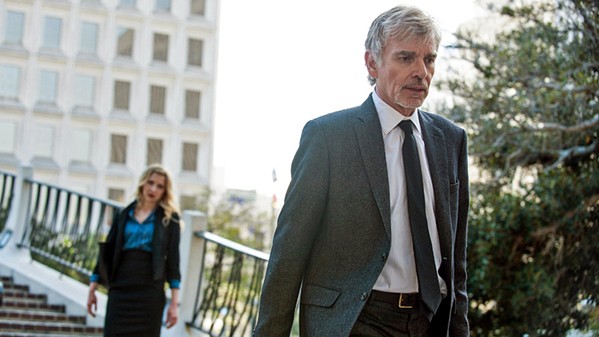 Now in its fourth and final season, I'm clearly a bit late to the Goliath party, but better late than never. This Amazon Studios-produced law drama created by David E. Kelley and Jonathan Shapiro follows disgraced attorney Billy McBride (Billy Bob Thornton), who wiles away his days drinking and lazily trying to get poor clients to plead out so he doesn't have to step foot in a courtroom. The once formidable lawyer lost his mojo in a past case, but in season 1, he's offered a chance to get it back when real estate agent and part-time DUI lawyer Patty Solis-Papagian (Nina Arianda) brings him a big case involving a wrongful death lawsuit.

This is a deliciously juicy story with a terrific cast of veteran actors, and in each season, Billy takes on a new near-unwinnable case—real David and Goliath stuff. There are lots of pitfalls along the way, but like David, Billy is deadly and unafraid of staring down a giant because he knows the law, he knows juries, and he loves justice. I'm halfway through the second season and am loving it. (32 approximately 60-min. episodes) Δ