Fresh local wild-caught king salmon is making its way to SLO County dinner tables, courtesy of the Central Coast fishing fleet. With the opening of salmon season May 1, local fishermen are plying nearby coastal waters in search of the silvery delicacy, as efforts gear up onshore to create a healthy fishing industry that's a model for the world. 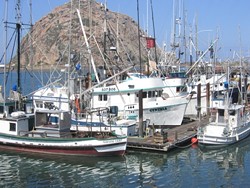 # "If anything is sustainable fishing, this is it," said Henry Pontarelli as he watched the boats load up with fuel and ice along Morro Bay's waterfront. While the fishermen head out to sea, Pontarelli is working on the first-ever comprehensive business plan for the future of the local fishing industry.

"The factors that have led to overfishing globally are not happening here. These fishermen are heavily regulated. They're not using spotter planes and technological fish-attracting devices. Some of them are out by themselves, without a crew. These are small family-owned businesses," Pontarelli noted.

Some will return to Morro Bay within a week to sell fresh salmon off their boats. Others will be gone for months, heading north along the coast to catch salmon, albacore, and other targeted species.

Jeremiah O'Brien, the president of the Morro Bay Commercial Fishermen's Organization, will stay in touch by satellite phone. As he finished up some last-minute repairs to the engines and hydraulics on his 50-foot boat, the Aguero, he talked about a unique community-based organization that he said will be officially formed in the coming weeks to promote the local fishing industry.

The environmental groups last year launched a program to buy local trawler boats and trawling permits because the dragged nets are considered destructive to marine life. The groups now hold the trawl permits that include an unused allocation for "a great deal of fish," he said.

"They're willing to give us, through this new organization, some of their allotment. We can fish with hook and line and traps, targeting some of the healthy stocks without impacting species of concern. Each boat will have an observer, so there's no room for fudging the numbers," O'Brien said.

The new, still-unnamed group is hoping to persuade federal regulators to allow hook-and-line fishing for the species currently covered by the trawling permits, which O'Brien termed "a stumbling block." The organization plans to make a presentation to the Pacific Fisheries Management Council in May or June for a decision by the end of the year.

"We'll present a sustainable fishing program to them, and show them it's a good way to do business. We've got high hopes. The Nature Conservancy and Environmental Defense have a lot of political clout, and together we'll hopefully be able to achieve something to re-establish a fishery on the Central Coast," O'Brien said.

One goal is to attract new, younger fishermen into the business locally.

"We're all getting old, and there's nobody behind us. If no one takes our place when we retire, all of our fish will be caught by other countries using unsustainable practices. We'll be virtually destroying the oceans of the world by importing all our seafood.

"By not giving us access to our fish, we're encouraging the destruction of oceans everywhere," O'Brien explained.

That's a theme echoed by the Central Coast Women for Fishing, a nonprofit group dedicated to fostering "a sense of the living culture of our fishing communities," according to a brochure.

At a recent breakfast meeting at Tognazzini's Dockside Restaurant on the Morro Bay waterfront, Morro Bay Mayor Janice Peters told the women, "Fishing is the oldest profession in the world, and it's not being respected as that. Local fish are valuable, something people should ask for, instead of buying seafood imported from countries without regulations."

As he finished fitting his boat with gear for salmon fishing, O'Brien expressed his hopes for the future.

"If we can establish a form of fishing that's acceptable to everyone, that's done in a responsible way, that's not damaging the sea, it can be used as a model not just for the Central Coast, but for the coast around the U.S., and other countries too. It's a pretty smart thing to do." ?