It happens every night. No iPhones or books are allowed at the sacred affair that is dinner at Kendra Aronson’s home in San Luis Obispo.

And you eat it seated around a table. 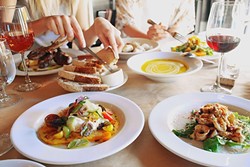 It’s always been this way, for as long as she can remember, going back to growing up in her parents’ home in Northern San Diego County. Aronson’s maternal ancestors hail from Mexico, and at least six nights a week, her mother would prepare a home-cooked meal that the family would enjoy together sans interruptions. Every Friday night without fail, the clan would go out to eat somewhere together, and Kendra ate many a taco at Tony’s Jacal, a Mexican restaurant in the San Diego area that’s been owned and operated by her relatives since 1946. These were the early experiences that led Aronson, creator of The SLO Farmers’ Market Cookbook, to a life of looking at, writing about, tasting, and dreaming about food.

“I grew up always surrounded by really good food,” Aronson said. “Then in college at Cal Poly, I really fell in love with food here going to the farmers’ market every Thursday. I thought, ‘Wow, this is so cool. This is the freshest, best stuff ever.’”

She grew up surrounded by food and worked part time as a server (working at Mama’s Meatball for a time in college), bartender, and even cheese monger. Aronson also dabbled in photography, but never thought to connect the two until she challenged herself to eat, drink, write, and photograph her way through the best bites and sips San Francisco had to offer when she was living up there.

“I realized that food photography is a whole different animal. It’s not like shooting a person or a landscape.”

Today Aronson does freelance writing, photography, and graphic and web design for a bevy of clients, but her favorite gigs always involve food.

As any amateur Instagramming food photographer knows, that wood-fired pizza topped with locally sourced mozzarella and basil can look amazing on the plate. It can also look like a greasy ball of goo once it’s captured digitally. Aronson has learned to navigate the perils of working with the more diva-like dishes.

“Iced things only look good for so long,” Aronson said. “Soup gets an oily film after it sits for a bit. A steak off the grill looks great for about five minutes. Ice cream melts incredibly fast.” 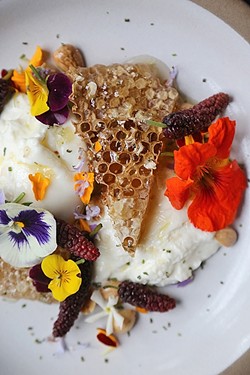 Sitting in the garden patio at Linnaea’s Café in SLO, Aronson takes a bite of a buttery, flaky rosemary shortbread cookie and explains how she might go about shooting her iced chai latte. The table would be staged with an empty glass and the actual chai latte would be off to the side, poured into the photo-ready glass at the last minute to avoid condensation from the cold beverage creeping up on the glass in the photo.

Trying to pull in a zillion likes with that #yummy photo of last night’s risotto at that candle lit bistro? Maybe don’t bother. According to Aronson, your meal will shine like the rock star it is with natural lighting. That said, the foodie determined to capture every bite should get super close to the plate, and then a few inches closer before snapping a photo. Maybe use the cloth napkin or flowers on the table to stage the scene before the main course comes out.

“Don’t be afraid that you’ll look like a weirdo,” Aronson said. “If you’re serious about it, just go for it. No one’s going to care.”

Aside from her cookbook, Aronson’s work includes capturing divine dishes for local clients like Ember, SLO Provisions, The Station, and Edible San Luis Obispo. And no bite is left behind.

“No food ever goes to waste on one of my food photo shoots. That’s the best part of food photography is you get to eat it afterwards,” Aronson said. “You need to make it enticing. That’s the biggest compliment you can get as a food photographer is if someone looks at it and is like, ‘Oh my gosh, I want to eat that!’”

Ryah Cooley is drooling over images of culinary masterpieces at rcooley@newtimesslo.com.