It’s 3:30 p.m. on Sunday, Dec. 15 and I’ve got a brownie in my left hand, a mug of hot chocolate in my right, and my eyes on a platter of dates garnished with mascarpone cheese and honey. The house is littered with stockings from The Dollar Tree—pink ones with Disney princesses and traditional red and green ones with Mickey and Pluto and Santas. They’ve all got names on them, embroidered by hand—a hand you would never call deft with a sewing needle. I’ve got a raging headache and the regret that’s curdling in my belly is spoiling the hot chocolate. Tchaikovsky’s sugar plum fairies offer an unlikely but seasonally appropriate soundtrack for my failure.

Swept away on a tide of Christmas cheer and entirely too much frosting, I erred. Two months ago I decided to put together a holiday-themed scavenger hunt for my friends and coworkers. Twelve tasks—for the 12 days of Christmas—and at the end of those 12 tasks a stocking for each of them, stuffed with goodies I’d picked up in Peru—leather bookmarks from Nazca, bird whistles that chortle when filled with water, alpaca leggings, and the like. I checked their schedules, and planned the scavenger hunt for one month out. That’s when the intense planning began.

They would meet at New Times at 11 a.m. and be given a missive explaining what was going on:

On the twelfth day of Christmas, your insane friend gave to you, 12 tasks that you must merrily do. Your stockings have been hung by the chimney with care, but whose chimney and in what condition and where? To secure your treats, you must play by the rules, solve all the riddles, decipher the 12 simple clues. Refuse to play, or perform with half a heart, and you’ll miss out on the message the caper was designed to impart. Fail to comply and baby Jesus will cry, and the Grinch will have won and what are you, a terrorist? Because that’s just no fun. A camera has been provided for you to document your progress. Kindly film each stage for the benefit of the cape’s authoress.

P.S. Colin said there was a reasonable chance—given the quality and patience of the clue hunters—that I would have an angry mob scenario if I gave you as many tasks as originally intended. So, I’ve narrowed it down to nine. Proof that I’m both reasonable and capable of compromise.

There would be a ready-to-assemble gingerbread house waiting for them in the New Times kitchen, as indicated by the first clue:

You can’t catch him, but if you use the right tools you may find him sufficiently wooed, to furnish the information you need to advance. ‘Tis the season when the gingerbread folk expand their brood, and they require safe haven from the feral, hungry hordes and their rolling pins so lean and so lewd. Build an abode befitting Mr. Bread’s stature and message a photo to the scavenger hunt dispatcher (XXX-XXXX).

The scavenger hunt dispatcher—my boyfriend, Colin Rigley, who was also responsible for preparing the hot chocolate, brownies, and mascarpone dates, all while indulging liberally in the peppermint schnapps—texted the following clue:

Beneath Spiderman there would be an envelope with a chewed up piece of gum, leading them to Bubblegum Alley where I had stuck GPS coordinates—at great risk to my health, I would like to add—that would lead them to Linnaea’s Café. The baristas there had a missive that read: 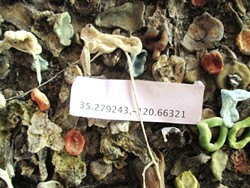 He’s got rosy lips, eyes sparkling and merry, and a lap fashioned for sitting, so hurry, don’t tarry.

Santa’s house is temporarily located in Mission Plaza, and no holiday caper is complete without approval from the big man himself, so he would give them the following clue:

He’s making a list and checking it twice, but your chances aren’t great if you share Matt’s vice. Follow the Jamo and find your clues, but resist the allure of the Siren Booze.

A not-terribly-subtle reference to McCarthy’s. Every Odyssey has its moment of temptation—press forward with a stalwart heart and clear mind or fall behind with the day drinkers? Staff writer Glen Starkey was situated at the bar with his wife, Anna, with a packet containing the next clue and accompanying paraphernalia.

Wassail the hippies where they roam free and nude. Sing your best carols and the hippies may just collude to send you on your merry way, clue in hand, on the course Captain Holiday Nutter had established for you.

Translation: Carol the Establishment using the lyrics to “Deck the Halls” and “Santa Baby” in the manila envelope.

Following what I presumed would be a successful carol, the clue hunters would be given the following missive:

In the spirit of Christmas, you’ve a package to deliver, so tighten your waistbands for a narrow chimney shimmer. The house will be stirring, that’s for certain, with baking and tantrums and storytelling and whirling dervishes of three elf-sized humans.

They would make their way to Executive Editor Ryan Miller’s house to deliver his stocking and receive a puzzle in exchange. The puzzle in question was a photo of my cat’s dollhouse—another story for another time—which, once solved, would direct them to my house where they would find the food, drinks, and, most importantly, stockings.

What could be difficult about putting together a nine-part scavenger hunt, right? Actually, putting the scavenger hunt together was the simple part. The morning of the hunt, one writer bailed. Two abandoned the effort at McCarthy’s, all but one refused to sing at The Establishment, and throughout the effort several texted and called to complain about various indignities including standing in line outside Santa’s house and having been forced to leave their beds before 1 p.m.

After playing his role at McCarthy’s, Glen texted, “That’s one pissed off, unhappy group of scavengers.” And I realized that I had made a mistake. I had unleashed a pack of angry, grumpy, outraged writers on the tinsel-strewn streets of downtown San Luis Obispo. And all because they had been asked to spend three hours solving riddles for Christmas presents.

I conclude, not with a “bah humbug,” which I will always consider beneath me but with a question, and an important one: Have I learned my lesson? Am I cured of elaborate scheming for the benefit of those around me? It was touch and go for those first terribly depressing hours immediately following the hunt, but the answer is no. Colin pointed out that I merely need to be more selective of the beneficiaries of my efforts. Not everyone was born to turn off their Xbox and step into an alternate reality in which the objective is whimsy and merriment, just as I was not born to do anything on a small scale or in a fashion most would consider normal. Live and let live. Keep writing clues, just make sure you give them to the right people—preferably ones as crazy as you are.

Managing Editor Ashley Schwellenbach is one bah humbug away from a peppermint stick stabbing. Send tidings of good cheer to aschwellenbach@newtimesslo.com.