When Circles Around the Sun was at SLO Brew Rock a month ago, the show sold out before the ink was dry on this music column. Now they're coming to Castoro Cellars this Saturday, June 5, from 7 to 10 p.m., and as of June 1, there were still tickets remaining, but if you want to go, I'd head to eventbrite.com right now and secure your seats—reduced capacity and socially distanced, of course. Under the aegis of Good Medicine Presents, working with Numbskull and folkYEAH, the LA-based instrumental supergroup plays Castoro's outside venue ($55 to $70 at eventbrite.com), touring in support of their third album.

"The seven-track collection marks a stylistic shift from their previous LPs," according to press info. "It's an evolution that sees the band embracing a sleeker, shinier, even dancier version of themselves‚ a cosmic disco of the body and the soul, still anchored in the groove, but ascending to the stars. The thing is, their sound isn't the only thing that's evolved. Since their last LP, Circles has undergone a transformation internally. It's a tale of life, death, and rebirth, of love and loss, of shedded skin and new beginnings."

"The built-in beats on it are actually pretty janky," Horne said. "But we knew we wanted to make more of a dancey, groove-driven album that would translate live, to give our shows a more high-energy feel."

"This band was never something I thought would get done to a click," said MacDougall, referencing the drum track, "but we all talked about it being more of a fun record, so we hung some mirror balls and played a bunch of dance music!"

It's a new sound for a great band that will tuck you deep in their groove pocket and take you for a sonic ride into unknown spaces. 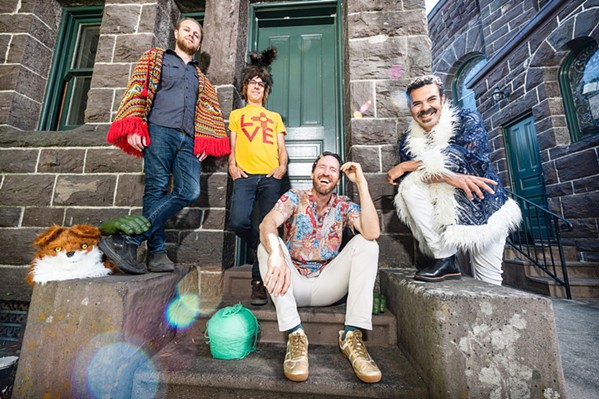 Then next Thursday, June 10, Good Medicine brings ALO (Animal Liberation Orchestra) to Castoro for another outdoor show (7 to 10 p.m.; $55 to $70 at eventbrite.com). These guys are awesome live!

"ALO is a lot of things," according to keyboardist Zach Gill. "Simply put, it's a rock band, a family, an artistic outlet, a community, and a business. But that only scratches the surface of this 30-year musical vision quest."

Gill started the funk 'n' roll outfit in 1989 when Dan "Lebo" Lebowitz and Steve Adams started playing together as 13-year-olds.

"We've all been through so much together, there's a lot of trust," Lebo noted. "This long-term relationship of ours is a beautiful thing."

They recorded their debut album by the time they were high school seniors, relocated to Santa Barbara for college, and now they have nine studio releases and two decades of touring under their belts.

Their newest, 2019's Creatures Vol. 1: Spark, added a new member, drummer Ezra Lipp (Phil Lesh & Friends, Stu Allen & Mars Hotel, Magic In The Other), who took over for longtime bandmate Dave Brogan. These days they're working on a series of EPs.

"We love the full-length album process, but these days there are so many different ways to get your music out there," Adams explained. "For us, the decision to make EPs was like, 'Why not try it? We like new things.' Just four songs to focus on each round in the studio. As it went, it was manageable and fun."

Brass Mash is back at Liquid Gravity on Friday, June 4 (6:45 p.m.; free), getting back into the swing of things after a pandemic-induced hiatus: "The last few months have been an absolute whirlwind!" bandleader Colin Dean said. "Back in February, the band was barely functioning and we were just sitting around waiting for the world to open up. As California and SLO County opened up, our monthly Liquid Gravity shows in March, April, and May were truly overwhelming. Limited capacity made for long lines of eager concertgoers: It's been great to have such energy surrounding the events, but I really hope folks know that we are going to continue to have our First Friday events through the summer and fall." Get there early! 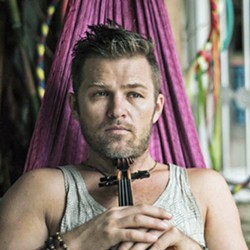 Steve Key brings his Songwriters at Play series to Sculpterra Winery this Saturday, June 5 (noon to 3 p.m.; free; all ages), where he'll be joined by touring troubadour Rags Rosenberg and local favorite Jim Conroy. Rosenberg is a songwriter and poet who "has spent a lifetime sifting through the leftover parts of the world and himself to try and create an archival record." Conroy is a well-known theater performer and member of Burning, Bad & Cool.

Cal Poly has three virtual concerts coming up this week starting with The Cal Poly Symphony presenting its season finale, "Voices Past and Present," through a virtual presentation at 7:30 p.m. on Friday, June 4 ($5 at pacslo.org). The winds and brass will conclude their yearlong exploration of Gordon Jacob's "Old Wine in New Bottles," a set of pieces based on old English folk songs. You'll also hear Ralph Vaughan Williams' "English Folk Song Suite," orchestrated by Jacob, and Nkeiru Okoye's "Voices Shouting Out," written in response to the events of 9/11.

The Cal Poly Choirs present "Ubi Caritas," which will feature a variety of selections on the themes of charity and love at 8 p.m. on Saturday, June 5 ($10 at pacslo.org). The Latin text "Ubi Caritas" is loosely based on the ancient chant melody. The Cal Poly Women's Chorus will present "Someone Will Remember Us" by Jocelyn Hagen. PolyPhonics will perform music by Carlos Guastavino and Joseph Rheinberger, as well as a special comical selection.

Finally, the Cal Poly Wind Ensemble and Wind Orchestra will present a virtual concert titled "Voices in the Wind" at 3 p.m. Sunday, June 6 ($5 at pacslo.org). Most of the works on the program were composed within the last decade, including "A Mother of a Revolution!" by Omar Thomas—inspired by the Stonewall uprising of 1969.

Local husband-and-wife folk duo Bob and Wendy continue their ongoing series of releasing a new song every month, which will culminate with an eight-song record released at the end. Their newest is "99," which was written as a tribute to Bob's mother, Nanette.

"Bob's mother, Nanette, was 92 years old when she passed away," Wendy explained. "I remember her dermatologist telling her that she had exceeded her lifetime limit of sun exposure. We visited her at assisted living and found her happily sunbathing outside on a chaise lounge. This is a song about longtime love and growing old together."

"99 a number on a page/ 99 no need to act your age// I can't imagine living life without you/ Everything I've done has been about you/ About you// 99 let me count the ways/ 99 I love to spend my days// Lying next do you out in the sunshine/ Laughing 'cause we both forgot the punchline/ The punchline."

Wendy's lyricism and expressive voice continue to astound. You can preview the track at bobandwendy.hearnow.com/99. Δ