Good Medicine unleashes a plethora of shows on SLO County, including Phil Vassar, Nicki Bluhm, and the Sweet & Tender Hooligans

Whether you’re ready for some hit country, Dusty Springfield-esque ’70s pop sounds, ’80s-style gloom rock, reggae of every variety, or smoking blues rock, Numbskull and Good Medicine Presents has got you covered starting with two-time ASCAP Songwriter of the Year and Billboard Country Songwriter of the Year Phil Vassar this Thursday, May 19, at Tooth & Nail Winery (6 p.m.; 21-and-older; $30 presale at ticketfly.com or $35 at the door). 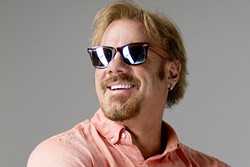 What can I say? The man loves to write soulful, incisive songs: “I’m not going out there to try and change the world, but for me, this is my thing, this is my little world that I can control now, and I’m really excited about this journey, getting new music out to the fans and working on other avenues to entertain people. For me that’s what it’s all about,” Vassar said in press materials.

The party keeps rolling at Tooth & Nail on Friday, May 20, when Nicki Bluhm and the Gramblers perform (6 p.m.; 21-and-older; $25 presale or $30 at the door) with Jade Jackson opening. Nicki, wife of Mother Hips frontman Tim, who’s also in her band, plays songs that feel like they could have been written in San Francisco’s Haight Ashbury neighborhood or LA’s Laurel Canyon in the ’70s songwriting heyday. Nicki’s long-limbed beauty and stage presence feels like a combination of Linda Ronstadt and Cher. She puts on a great show!

Tooth & Nail tees up one more show on Saturday, May 21, when the Smiths/Morrissey tribute act Sweet & Tender Hooligans takes the outdoor stage (6 p.m.; 21-and-older; $14 presale or $16 at the door). Fronted by Jose Maldonado—aka “The Mexican Morrissey”—expect covers from all stages of The Smiths’ and Morrissey’s careers. Maldonado has even translated a few covers into Spanish! According to their bio, “Morrissey himself paid the band the ultimate compliment in 2004 when he opened his show at The Wiltern by announcing to the crowd, ‘Hello, we are the Sweet & Tender Hooligans … I am Jose.’”

Meanwhile back in SLO Town, Good Medicine hosts Katchafire at SLO Mission Plaza on Friday, May 20, (5 p.m. all ages; $5 at ticketfly.com) with special guests Mystic Roots. Hailing from New Zealand and boasting an all-Maori band, Katchafire has been playing Bob Marley-inspired reggae since 1997. 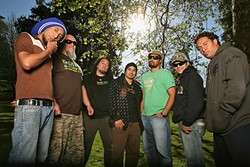 And talk about competing against yourself—Good Medicine hosts a third show on Friday, May 20, when it brings The Harlis Sweetwater Band to the Treana Tasting Cellar (4 to 7 p.m.) during a fish and chips dinner show catered by Tom Fundaro and Open Range Fish & Chips ($15 dinner; reservations recommended at hopefamilywines.com/treana). Sweetwater plays hard-driving blues-rock and they have the beards to prove it.

And because they’re too legit to quit, Good Medicine and Co. are tucking in one more show this week, on Wednesday, May 25, when they bring Samoan-descent reggae artist J Boog to the Fremont Theatre for the Resistance Tour with special guests Fortunate Youth and Hirie (6:30 p.m.; all ages; $21 presale at ticketfly.com or $24 at the door). Boog fell in love with reggae after his sister brought home the Bob Marley songbook, and he’s been delivering island-inspired reggae ever since. This is feel-good music.

New kids on the block

They’re not quite kids, but the members of Four Day Beard are definitely new, a local act playing brooding, experimental rock, folk, blues, and more filtered through a psychedelic shoe gazer sensibility.

“Where’s all the good luck gone? Is it running on?” asks the band on “Kentucky Gentleman,” the lead track off their self-titled debut album. The track starts with tightly controlled guitar distortion, but when the vocals kick in, the song takes on a decidedly Morphine-like vibe sans saxophone, with swirling, playful, psychedelic toy organ. It’s charming as hell.

“Feels Like I Might Disintegrate” begins with a tambourine and guitar before morphing into shimmering synth: “I guess you noticed I’m not from around here. Feels like I landed here from outer space. There’s no train or jet airplane can take me back to where I belong,” the band sings.

“Leaning heavily on personal experience, Four Day Beard’s songs are both a contemplation and exploration of love, heartbreak, feelings of alienation, and the struggle to transcend frustrations of modern life,” according to their bio.

Their album’s closing song, “East Texas,” gets right at the heart of the band’s exploration of feeling adrift: “It’s OK. Just take your time. It takes time to get there. It’s alright if you’re losing your mind. I think everybody’s been there. It’s alright. It’s OK if we don’t know where we’re going. Nobody really knows anyway. If they say they do they’re lying.”

The album’s unusual instrumentation, forlorn lyrics, and striking but unobtrusive melodies are immediately attractive—which is sort of amazing for a band clearly operating well outside the mainstream. Recorded in three locations—Southern Illinois; Knoxville, Tenn.; and San Luis Obispo—it was created via long-distance songwriting and instrumental collaboration. Very interesting sounds indeed.

The Allan Hancock Jazz Band performs their annual Spring Pops Concert in Orcutt this Thursday, May 19, at the Unity Chapel of Light Church (7 p.m.; all ages; free). Expect an eclectic mix of arrangements, including “Wildcat Shuffle,” “Stormy Weather,” “Blue Bossa,” “Another Zydobeto,” “Somewhere,” “How About You?” “S’Wonderful,” “Jada,” “Work in Progress,” “Someone To Watch Over Me,” “Aftershock,” “Begin the Beguine,” and “Armando’s Big Band.” Sounds like a lot of great standards! 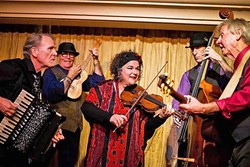 This month’s For the Folks show on Friday, May 20, at the Honeymoon Cafe in Pismo, features Surfeza! (6:30 to 9:30 p.m.; all ages; free). “For the Folks music series is committed to connecting audiences with local acts in a setting that will showcase and celebrate their original work,” organizers said. “There are plenty of talented musicians growing in this region, and we want to contribute to adding more stages for them to play and reach new listeners.” The duo—Alan Vogan and Jeff Cannon—is “a mix of surf, beer, and original tunes.”

The Cal Poly Music Department presents an evening of woodwind and string chamber music on Friday, May 20 (all ages; 7:30 p.m.; free), at the San Luis Obispo United Methodist Church. Several ensembles will perform a variety of traditional and contemporary repertoire featuring woodwind and string instruments.

Café Musique will perform songs from their amazing new album Ebb & Flow this Friday, May 20, at D’Anbino Vineyards and Cellar (8 p.m.; 21-and-older; $15 tickets; reservations suggested at 227-6800). The Gypsy, jazz, folk, and wild classical act is a wonder to behold, with stunning musicianship, amazing synergy, and proof positive that the accordion is cool, man. Cool.

SolRising—fronted by Nigerian-born Ike Ogiamien—heads to Frog and Peach this Friday, May 20 (10 p.m.; 21-and-older; free), to promote their new self-titled album, which featured special guests Pato Banton and E.N. Young of Tribal Seeds. Ogiamien will remind some of legendary Jamaican dancehall artist King Yellowman, and according to the band’s bio, “His dance moves and deep lyrics along with tantalizing guitar riffs, heavy bass lines, and crafty drum rhythms, keep your feet moving and your brain engaged.”

Ry Bradley, whose family in past generations lived in tents and picked peas in Paso Robles fields, returns with his brand of country rock for two local shows: Friday, May 20, at Limerock Orchards (4:30 to 7:30 p.m.); and Saturday, May 21, at Cass Vineyards (noon to 3 p.m.). “Bradley’s songwriting, singing, and guitar playing are reflective of the Texas outlaw influence of Nelson, Kristofferson, Jennings, Walker, along with a rub of Lovett, Vaughn, King (Freddie), Ely, Earle and especially Dale Watson,” according to his bio.

Three terrific local bands bring their funk, soul, and blues to Tap Brewing Co. this Saturday, May 21, when Burning James and the Funky Flames, Back Bay Betty, and the Mystery Brothers hit the patio (7 p.m.; $15 presale tickets at eventbrite.com or $20 at the door). From the NOLA sounds of Burning James to Back Bay’s sexy blues-rock to the Mystery Brothers’ baritone blues, this will be a great concert to shake your moneymaker.

The Basin Street Regulars present an afternoon of hot swingin’ jazz this Sunday, May 22, starting at 11 a.m. in the Pismo Vets Hall. The event starts with a jam (bring your instrument), then hear Stockton’s The Midnight Rose Jazz Band and Bakerfield’s Tevis Ranger Junior High Jazz Band (all ages; $10 admission; food and drink available for an additional purchase).

Caitlin Anne Webster, a mainstay of the L.A. music scene, will bring her original music that “wavers somewhere between romantic and brutal, delivering truths of longing, love, sex, and the hardships of modern living,” to two Songwriters at Play showcases this week, Sunday, May 22, at Sculpterra Winery (1 p.m.; all ages; free); and Monday, May 23, at Otter Rock Café (7:30 p.m.; all ages; free). She lists Linda Ronstadt to Otis Redding as influences.

Seattle-based newgrass act Bootleg Sunshine makes their SLO Town debut at Frog and Peach this Tuesday, May 24, (10 p.m.; 21-and-older; free). If you’re ready for some foot stompin’ bluegrass spiced just right with some Afro-Cuban heat, this is the band for you. “This will be our second time playing in California, this time ending at Lightning in a Bottle Festival. SLO seems like a pretty cool musical community,” wrote the band. Why, thank you! We like to think so.