As I sat in the Broad Street Giant Grinder Shop awaiting my order, I watched several other first timers approach the counter and react exactly the way I did upon seeing the grinder: “You’ve got to be kidding me!” That may lead you to think we were looking at the whole grinder, but no, it wasn’t even the half-sized grinder. That was our reaction to the “lite” grinder, a huge nine-inch-long roll stuffed with a pile of delicious meats, cheeses, and fresh veggies dressed with 100 percent olive oil. 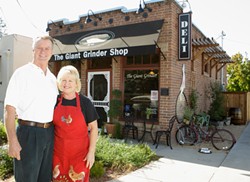 I ordered the East Coast Combo, the classic Italian sandwich and “a house favorite,” for my first meal at this quaint eatery. Offered on a choice of French, sourdough, or whole-wheat roll, it’s loaded with mortadella, Italian salami, and capicola (or coppa, a traditional Neapolitan Italian salami, cold cut, from the pork shoulder that’s dry-cured) with provolone cheese, lettuce, tomatoes, peppers, oregano, salt and pepper, and olive oil.

“We can make it with mustard or mayonnaise,” co-owner Sherri Fuller pointed out when I ordered, “but if you want it East Coast style then we only add olive oil.”

I have to admit, the lite grinder is equal in size to the individual-sized sandwiches I prepare for my husband Dan and myself. But that grinder was so tasty I would’ve eaten more than half had Sherri not come over with half of a lite-sized, hot meatball sandwich so I could taste something from the hot grinder selection. I know what they mean when they say it takes two hands to eat it. It’s messy but worth the trouble for these spicy meatballs with peppers and provolone cheese in a finger-licking-good tangy tomato sauce barely contained by the crunchy, toasted French roll.

This is not the place for people with emasculated appetites. On the other hand it’s the perfect place for foodies, like me, who live for our next great meal, be it a perfectly executed, multi-course gourmet meal of bite-sized offerings, or one helluva delicious and hearty sandwich that’s chockablock with good stuff inside. The grinders range in price from $5.79 for the lites to $15 for the whole grinder on an 18-inch roll with one pound of meat.

If there’s anyone who’s an expert on this East Coast Italian deli specialty, it’s Brad Fuller, owner and operator of the new Giant Grinder with his wife Sherri. Brad noted there are two stories about the origin of these sandwiches: The Italian delis made these huge sandwiches that required you to grind away at them with your teeth, which he thinks is more likely true; another tale says they were established in Bedford, Mass., where the Italian families made these giant sandwiches and took them to the shipyard where they sold them to metal workers, who were called grinders because they ground the rivets down on ships under construction.

“The grinder is a po’ boy in the south, a hoagie in Philadelphia, and a submarine in California,” Brad noted. “On the East Coast, people prefer them on a crusty roll, but in southern California people thought we were using stale bread so I had to switch to softer rolls.” That hasn’t changed, but in the tiny SLO location he no longer has the space to bake the rolls himself.

Born and raised in Windsor Lock, Conn., north of Hartford near the Italian section of town, Brad grew up on grinders. He studied engineering design, and after graduating, decided to visit California. “I drove until I hit water. I ended up in Manhattan Beach and the weather was beautiful,” he remembered. “But I couldn’t find a decent sandwich anywhere, so I headed back East to learn how to make the traditional grinder.” His journey took him back to his favorite, the Franklin Giant Grinder and Pizza Restaurant, where he learned to make everything, including the signature peppers that go on most sandwiches. “That’s the secret to our success, the peppers.”

He opened his first Giant Grinder in 1972 in Manhattan Beach to great success. He remembers buying 10 bushels of peppers every day to make the sandwiches they sold daily. Over the next ten years they created a small chain of delis in southern California, some of which sold pasta and pizza. Here, the small deli is strictly limited to grinders, green salads, deli salads of pasta or potato, and home-style soups. They also sell chips, pickles, soft drinks, and chilled coffees.

The de;cor is quaint, like a country inn you’d see in Country Living magazine. A large ceramic vase holds iced water, and they offer tastes of the muffins they sell from Edna Valley Market, which also bakes the sandwich rolls. The Giant Grinder Shop is small with only one table and window seating inside, but there are several small tables outside. Check out their website at giantgrinderslo.com, where you can see the entire menu and order food ahead. The Fullers couldn’t have picked a better time to start here, now that everyone’s watching their budget, and they’re offering some of the tastiest bargain meals I’ve ever had in SLO County.

Join seven local farmers who will share the bounty from their gardens during a unique dinner in Oak Glen Pavilion, the new green building at the San Luis Obispo Botanical Gardens. The meal will include recipes from The Santa Monica Farmers’ Cookbook by Amelia Saltsman prepared by SLO’s popular chef Maegen Loring of the Park Restaurant. The author will be the master of ceremonies during the dinner and will discuss local farms, while you dine with the farmers and their families. Reservations are $75 per person and include an autographed copy of Saltsman’s cookbook.

The SLO Botanical Gardens are located in the El Chorro Regional Park, just off Hwy. 101 between SLO and Morro Bay. Dinner is limited to 70 people. For information and reservations, call 541-1400, ext. 302.